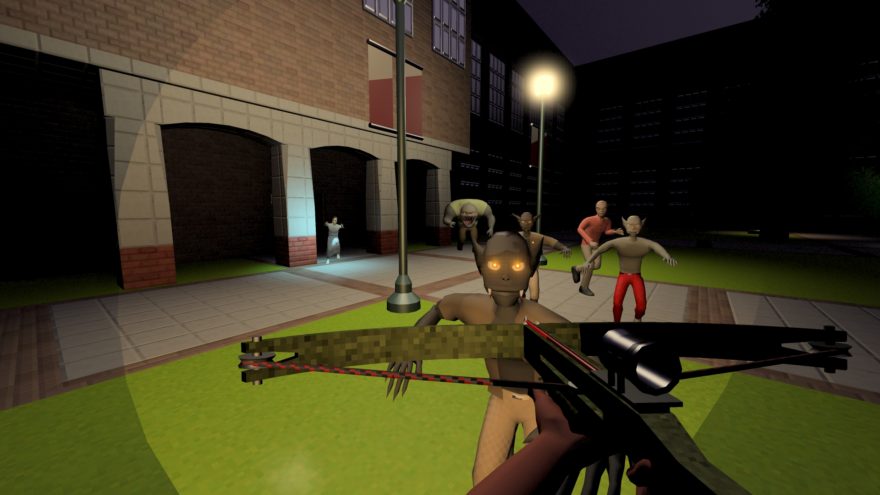 Slayer Shock is an effort to make a tense, smart vampire survival game, but it ends up feeling more like a B-movie version of a classic genre. It’s not offensively bad or anything like that—it has a worse fate. It is bland.

In the wake of a vampire epidemic, Slayer Shock tasks you with wandering a procedural Nebraskan town, completing tasks such as going on patrol or killing elders. As you walk around exorcising vampires, you can collect “vampire dust” that can be exchanged for weapons or abilities. You can sneak through tall grass, surprising enemies or come at them head-on and aggressively. It’s all fairly run-of-the-mill stuff, and that’s exactly its problem.

Slayer Shock feels like a game made by someone who grew up loving Looking Glass Studios which, in the case of creator David Pittman, seems to be the case. It shares the same blocky, dark look of games like System Shock (1994) and Thief: The Dark Project (1998). But, unfortunately, Slayer Shock doesn’t live up to those games, nor does it evolve beyond its inspirations in any meaningful or unique ways.

it feels like an homage to games I love

You stalk around a blocky town for a bit, kill some enemies, and move on. The only time I even felt challenged was when an enemy sneaked up behind me, getting in several hits before I could realize what was going on. But even that was more annoying than anything else.

I believe there’s heart in Slayer Shock; it feels like an homage to games I love and look back on fondly. However, if it’s a love letter to games of a bygone era, then it’s a letter full of typos and grammatical errors. Though it seemingly does its best to tell a story of a town ravaged by monsters, the result is little more than a stale copy of John Carpenter’s Vampires (1998).

Slayer Shock is available to buy now. Find out more about it on its website.