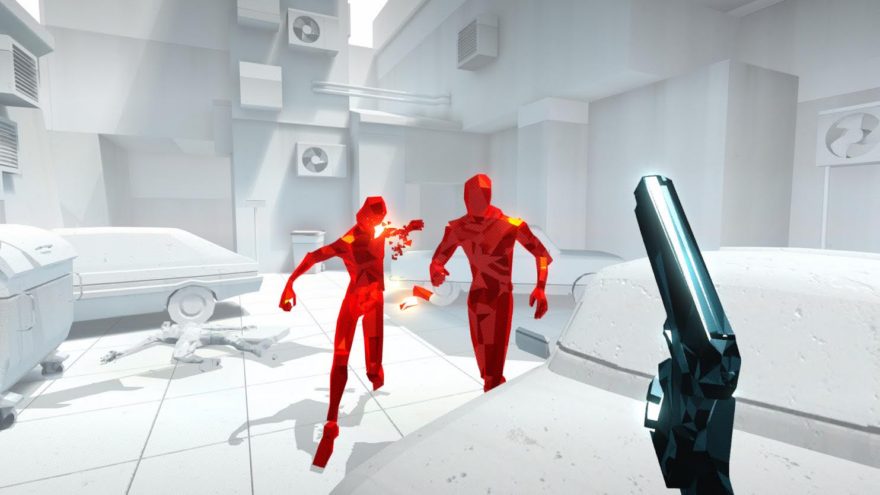 The Superhot Team announced SUPERHOT VR for the Oculus Touch this week, a project that’s been in the works since late 2013. Anyone who’s completed the original game, released earlier this year, will surely shiver with anticipation at the countless storytelling possibilities this virtual reality endeavor presents. If, on the other hand, you’re someone who avoids spoilers and has plans to play the current build of SUPERHOT, you should probably read no further.

SUPERHOT is a special experience—one that owes much of its brilliance to VR-centric cyberpunk works like The Matrix (1999) and William Gibson’s Sprawl sequence. An inventive, tongue-in- cheek critique of traditional first-person shooters, SUPERHOT introduces players to a new fictional VR game called superhot.exe, which sets in motion a series of weird, metanarrative events. The player character quickly realizes she’s under surveillance by the makers of a game, known only as “the System,” and becomes complicit in a conspiracy involving the murder of countless “Red Guys,” the game’s ubiquitous enemies.

It’s unclear whether the player character exists within our world or the virtual world created by the System, but that’s almost certainly the intention. Artistically speaking, it’s a minimalistic, crystalline reality in which “time moves only when you move,” to quote the game’s Steam listing, and where every NPC is a faceless, voiceless entity hell-bent on killing you. One of the game’s most inspired stages comes when the System orders you to infiltrate your own office, where you find the player character seated in a gaming chair, wearing a head-mounted display.

“You know the way,” the game tells you. “You will learn the hard way. See if it hurts. It’s the only way.” Then, “Obey.” Eventually, you have no choice but to approach your own body, seeing yourself hunched over the keyboard, oblivious, and slam your virtual fist into your own… head?—again, the metaphysics of it all are a little ambiguous.


It only gets more complicated from there, and the ending arrives with a clever mixture of satisfaction and horror. But if the SUPERHOT VR trailer is any indication, there could be yet another layer added to the game’s plot when it hits Oculus—the team has added a more naturalistic look to the player character’s workstation, and also hint that there could be more imagery involving virtual reality headsets in the upcoming version. Prepare to surrender control.

SUPERHOT VR arrives later this year on the Oculus Touch.