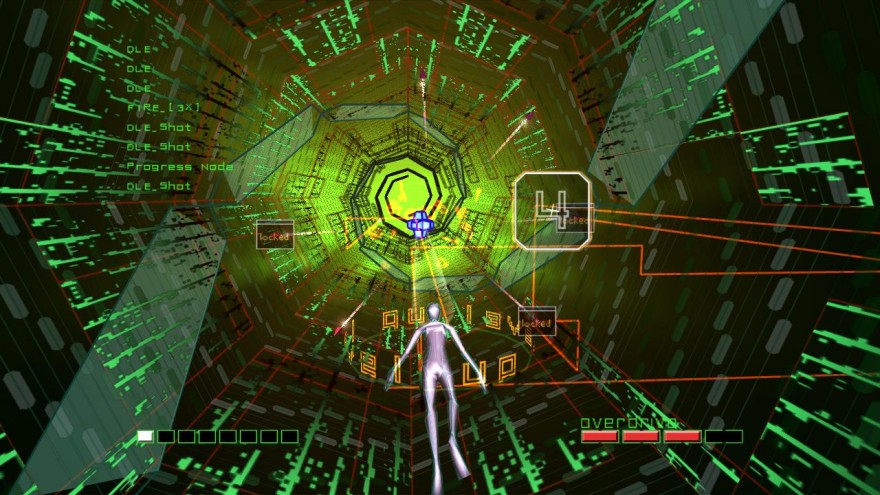 There’s a moment in the demo of Rez’s PlayStation VR inception (retitled as Rez Infinite) where I accidentally transgressed my professional demeanor and said “holy shit.” Not a lone “holy shit this is kinda cool,” as I glanced around the technicolored space of Area 02. Nor a woozy “holy shit I feel nauseous,” as I dizzyingly locked onto rockets flying towards me. But an awe-inspiring “holy shit, this is VR.” VR at its most realized. Rez is VR. And honestly, it kinda always has been.

Game designer Tetsuya Mizuguchi’s Rez was always on the cutting edge of not just experiencing technology, but game innovation as well. “The game should feel like a new media form,” said Mizuguchi, during the retrospective talk “Classic Game Postmortem: Rez” at the Game Developer’s Conference. “It’s our job [as developers and designers] to create new experiences.” Mizuguchi’s Rez has become synonymous with many things over the years since its initial release in 2001: Synesthesia, electronic music, even a controversial vibrating accessory. Yet what many don’t realize is the simple motivation behind it all—a marriage between music, games, and feeling.

Mizuguchi’s first encounter with inspirations for Rez —even before he had a concrete idea for the game—stemmed from the classic shoot-em-ups Xevious (1982) and Xenon 2 Megablast (1989). The games’ punchy sounds and energetic music spawned delight in Mizuguchi, an idea that music and games could truly be joined together. It elicited a feeling of hope. “[It] opened up my imagination about what this all means,” he said. “And how do I create something off what I’m experiencing right now.”

After graduating from university, Mizuguchi developed a handful of racing games for Sega, including the notable arcade racing simulator Sega Rally (1994). Despite a foray into another genre, Mizuguchi’s mind stayed within his ultimate goal, always thinking of a way to intertwine music and games into a cohesive existence. It wasn’t until a trip to the EDM festival Street Parade that the idea of synesthesia plagued Mizuguchi’s senses that, as he mused, “it perfectly synced in my head.”

Synesthesia, as Mizuguchi defines, is the ability to “hear the colors, see the sound.” A primary inspiration for this method of thought was from Russian painter Wassily Kandinsky, who frequently painted the sounds that he saw and producing abstract work in the process. It was this, coupled with the question, “Why does music make us feel so good?” that finally paved a direct path for Rez’s development. The quest to make music feel positive in the realms of a game was another hurdle for Mizuguchi to climb. In a pointed example, Mizuguchi talked of electronic DJs acting as “mood designers.” DJs don’t just hype up the crowd, but control the mood that the crowd absorbs. DJs seek to “elevate our feelings,” said Mizuguchi. “Lift us to the next level.” Quantization, the syncing of rhythm to make one feel good, later became the “essence to perfecting the mechanics of Rez.”

When Mizuguchi set out to create Rez, he sought to re-design experience entirely. An experience that, as Mizuguchi himself said, is “not just a journey, but a treasure.” To marry two mediums he deeply appreciated, and felt didn’t join together in the ways they deserved. The path to Rez Infinite is almost painfully obvious with Mizuguchi’s history of utilizing the newest technology available to him at every turn of his career. With PSVR, Mizuguchi’s at last giving Rez an extra level: Area X, an area with particles that sway with the music to boot. Given Rez’s innovative, whirlwind of a history, the leap to VR makes complete sense. Despite not always existing as VR in the sense of a literal virtual reality headset to plop on your skull, it was VR in the vein that it transcended expectations for videogames. Rez innovated outside of the space of a lone visual experience, transcending it into something much greater. And it’s not bound to derez anytime soon.

During his talk, Mizuguchi noted that he hoped to release Rez Infinite at the launch of PSVR in October 2016, but held no promises. Check out our ongoing coverage of GDC 2016 here.