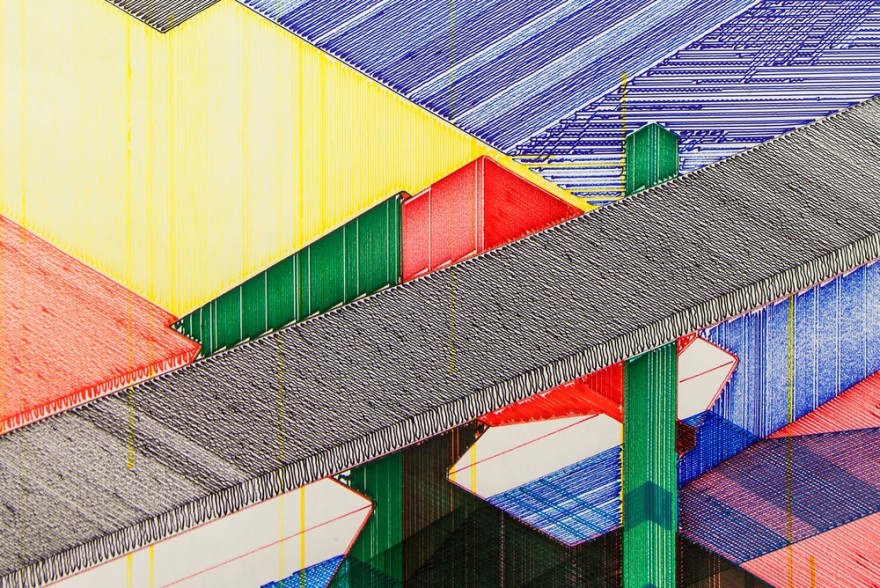 The computational science of randomness is a way to establish a firm balance without bias; a gateway between an artist and code itself. In videogames, randomness can take hold anywhere from a laughable Bethesda glitch, a serendipitous discovery in Metal Gear Solid V, to the randomly generated levels of iOS indie hit Downwell. For Los Angeles-based artist Miguel Nóbrega and his online art gallery “Possible, Plausible, Potential,” randomness is implemented as a way to strike a balance between coding and the artist.

none of this illustrated architecture can actually exist.

Using a plotter machine armed with colored markers, Nóbrega has written lines of code with an architectural aim to craft “generative drawings,” as the pieces’ webpages describe, each fitting into a specific theme in the virtual gallery—“POSSIBLE STRUCTURES,” “POTENTIAL SCULPTURES,” “PLAUSIBLE SPACES.” The plotter is a combination of processing, an open source programming language, and a CNC vinyl cutter, with seven colored permanent markers attached. As the code is written, the plotter draws with extreme precision architectural shapes and lines: floors, walls, stairs, columns… basically anything with the possibility of being real. But here’s the catch: Nóbrega inserts randomized code into his already existing script, thus creating unpredictable turns.

Nothing in Nóbrega’s art is viable in a practical sense: none of this illustrated architecture can actually exist. The lines are precise, the texture almost feels tangible, the eye jumps all around the heavily detailed, machine-generated illustrations, not knowing where to rest. None of it is actually possible, plausible, or has any potential, but that’s the point, isn’t it?

View more of Nóbrega’s art on his online gallery, Superfície.