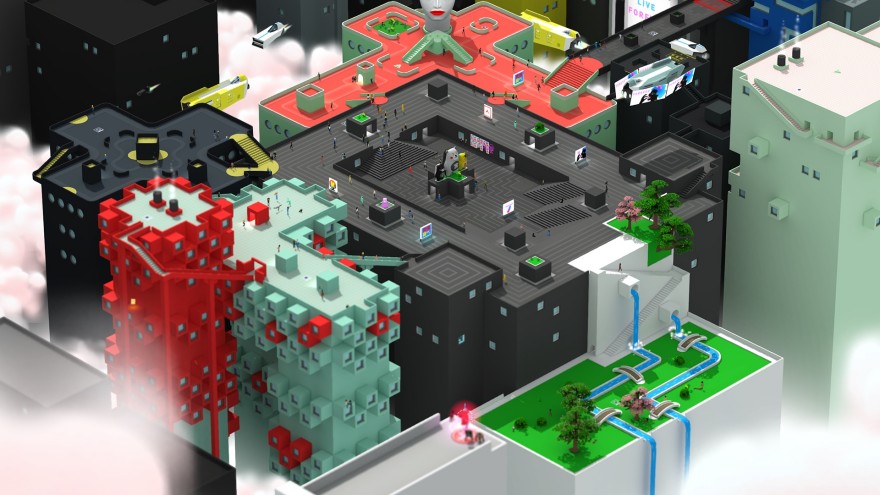 Tokyo 42 is cyberpunk in all but look. Its future vision of Japan’s bustling capital city has none of the dead skies and drug-addled misery of William Gibson’s Chiba City, nor the clustered smokestacks and commercial traffic of Blade Runner‘s (1982) Los Angeles. Yet, it’s a game that has you running through the Tokyo population as an assassin—in both single player and multiplayer modes—popping off targets with grenades and sniper rifles, able to change your skin (presumably a cyborg ability) to blend back in with the crowds. The brief description of the game’s story also tells us that you’ll “uncover a dark conspiracy that will affect everyone.” This is all very cyberpunk.

Perhaps the visuals fall in line with a more modern type of cyberpunk, then, one that is informed by today’s reality more than the fictional predictions of it helmed from the 1980s. While the tutti-frutti high-rises and pleasantly traditional Japanese temples are seemingly at odds with the underlying dark themes of Tokyo 42, there’s something familiar about this clean-cut friendliness. If cyberpunk informs us to mistrust corporations, especially those with the most power over people, then we must look to the likes of Apple, Google, and Facebook. These are companies that collect our information to use it and sell it to the highest bidder, that push out new technology with a higher price tag each year, somehow convincing us that we need to replace the older shit we bought only months ago.

If we are living in a cyberpunk dystopia these days—and there are those that argue that we do—then we have to acknowledge that it doesn’t share the dated vision of electronic wires criss-crossing overhead and people using hacking devices that belong to the VHS era. Sure, we have the smog and the skyscrapers plastered in adverts, and there are plenty of drugs and addictive chemicals doing the rounds, and the homeless do indeed line the streets. But, for the most part, the dark heart of the would-be corporate villains of today isn’t reflected in the make-up of our cities so much as it is hidden behind the polished veneer of them. The Silicon Valley giants that rule the world today do so by purporting to be our friend. They want us to “be connected,” to “be discovered,” (as the Facebook slogan goes) and to use their software to do so—but connected to who? They say it’s to our social friends but it’s more than likely to other corporations that will pay a high price for our personal info.

The Jetsons-style bubble cars that fly by Tokyo 42‘s boldly colored and neatly arranged architecture smacks of the optimism of 1950s futurism. But underneath all that is conspiracy and corruption, beating away like the dark heart of a serial killer who wears a fake smile as they mingle with the rest of the population. All that aside, it also makes for a city that has a similarly immediate visual appeal as Monument Valley (2014), viewed as it is from an isometric perspective as per its inspiration in the 1993 cyberpunk game Syndicate. Oh, you can also be a cat, as if you needed any more reason to be interested in this game.