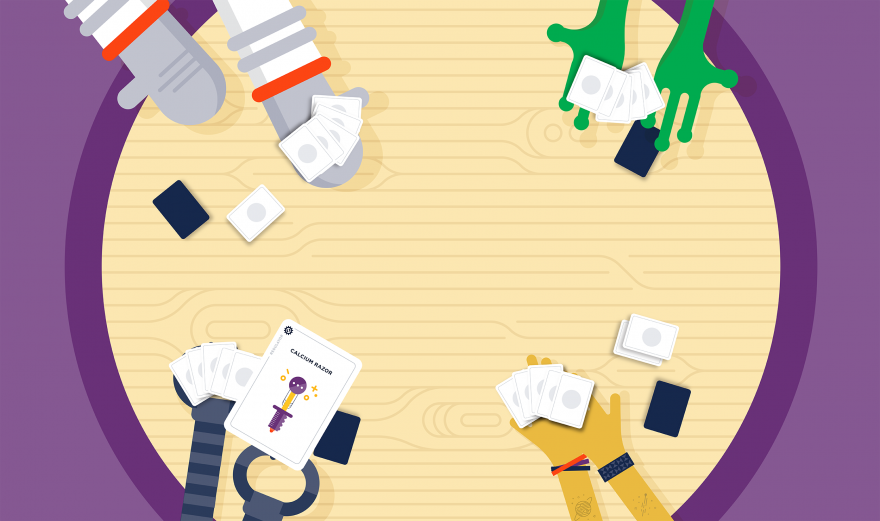 It’s hard for me to imagine Spaceteam as a card game. My burning memory of it is playing it over a table of half-eaten sushi somewhere in France. A bunch of us were sat around in a square, smartphones trembling in our hands, frantically shouting at each other as loud as hungry ravens. How any of us understood a word of it I don’t know.

The thing is, Spaceteam is so suited to being played on a smartphone that divorcing it from that platform seems futile. What works about it specifically is the urgency that the game forces upon you. As it’s digital, the seconds are counted independently by the game, so everyone can focus on trying to fix a constantly malfunctioning spaceship. It also takes advantage of the smartphone’s mobility and ubiquity, meaning that there are potential players all around you who can join in with ease—people can walk into the room, sit down, and begin playing without any hassle.

Despite whatever resistance exists, a team has developed Spaceteam as a card game, one that they hope captures the spirit of the original. The idea is the exact same: all members of your crew have to ensure the ship systems are functioning properly in order to escape an impending black hole. The difference is that, instead of holding a smartphone in their hands, each player has some cards. These cards are tools that can be used to repair different parts of the ship.

Players are assigned a sector and once the game starts they then have to react to the cards pulled from the Malfunction Deck in front of them. The usual uproar of panicked shouting should then commence as each player tries to find the tool card they need from other players to fix whatever has gone wrong in their particular sector. There are no turns to take here, instead everyone plays at the same time, frantically fighting against a timer. Victory is achieved if enough malfunctions are corrected to reveal the six hidden System cards before time is up.

Having this explained to me a week ago by one of the creators, Matthew Sisson, has turned my view around. I can see how this might work. Spaceteam as a card game could be possible. And so I spoke to Sisson further to find out precisely how he and the rest of the team went about translating the game from digital to physical, and the challenges this presented.

How did the decision to turn Spaceteam into a card game come about?

We’ve always been into games, and we’ve been creating games as more of a side project for quite some time, until we got into escape rooms. Escape rooms are basically fully-immersed games that take place inside of a locked room, but the big limiting factor is that people need to come to you to experience this type of game. So we wanted to move towards the retail game space in a big way, and we wanted to do something totally different that wasn’t like any existing card games. One day we were playing the Spaceteam mobile game, and we just started thinking, this would be cool to turn into a board game (we initially planned on a board game, but during development realized the card game would be simpler for players to learn such a hectic-style game). Matt randomly reached out to Henry [Smith, the creator of Spaceteam] and asked him if he would be interested, and to our surprise, he said yes. And, thus the Spaceteam Card Game was born. 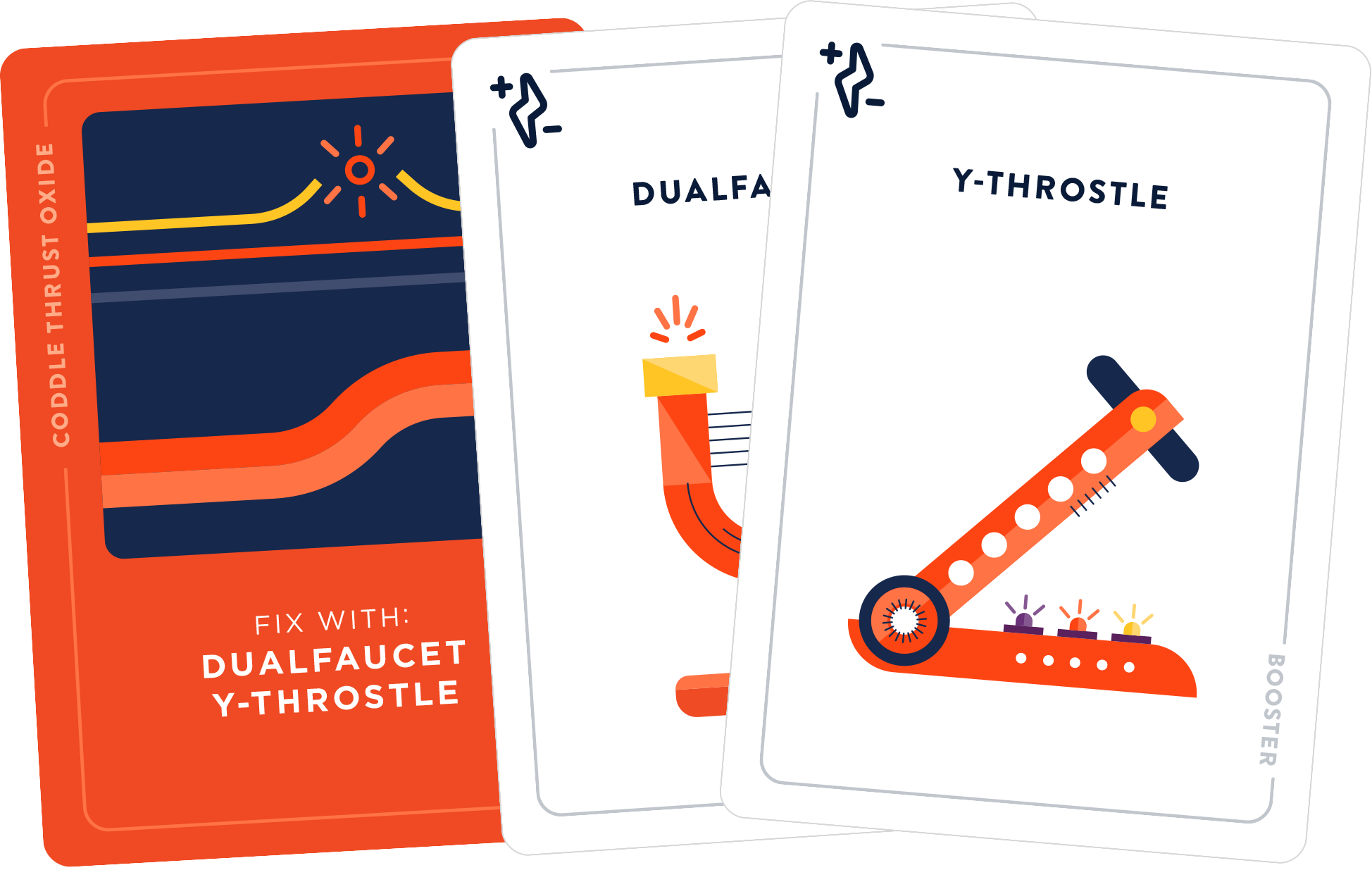 The original Spaceteam had a great sense of urgency. How did you translate this to a card game?

We found that real-time games are more difficult to create that we had at first anticipated, but working with Henry and Elan Lee (of Exploding Kittens) really helped us to figure out how to translate the existing urgency into a card game. (Our experience in creating escape rooms also really helped.) We experimented with a lot of different options before we ultimately concluded that: ‘we NEED to use a timer’ and ‘we must force communication/shouting’ (i.e. we experimented with a version where all players tool cards were laid out, but ultimately decided against this to force more communication/shouting). Without the timer, it really depended on the overall personality of the group, and was really difficult to avoid strategist-type players from slowing the game down in order to achieve the most effective plays. We found that the timer was the only way to ensure that all players would get on board with the extreme urgency required to induce accelerated heart rates, and ultimately excited shouting.

We also want to move right into expansions for this game

What were you trying to achieve with the card game’s artwork? Did you use anything as reference material for the art style?

For every project we take on, we establish a persona and setting, and really try to step into that fantasy. In this case, we wanted to recognize that spaceships require extreme precision but this particular spaceship is not a great example of that precision, it’s barely staying together; it is a clunky, half run-down spaceship. Overall, we wanted to have a clean, funky, hard-to-describe but easy-to-look-at cards, and tried to use a color palette reminiscent of the 8-bit theme used for the original Spaceteam mobile game, but with a modern spin.

How much money are you hoping to raise with the Kickstarter and what will it be put towards if successful?

Our goal will be $10,000, which is the amount we need to make a small production run, but we’re obviously hoping for more; the sky is the limit. We’re still sorting out our stretch goals, but some things we are exploring are upgrading from a standard sand timer to a totally awesome (not going to ruin the surprise if we get there) timer. We also want to move right into expansions for this game; we’ll be including the first expansion (a Not Suitable for Space version), which we wouldn’t be able to do if we didn’t put this on Kickstarter.

You can support the Spaceteam Card Game on Kickstarter.