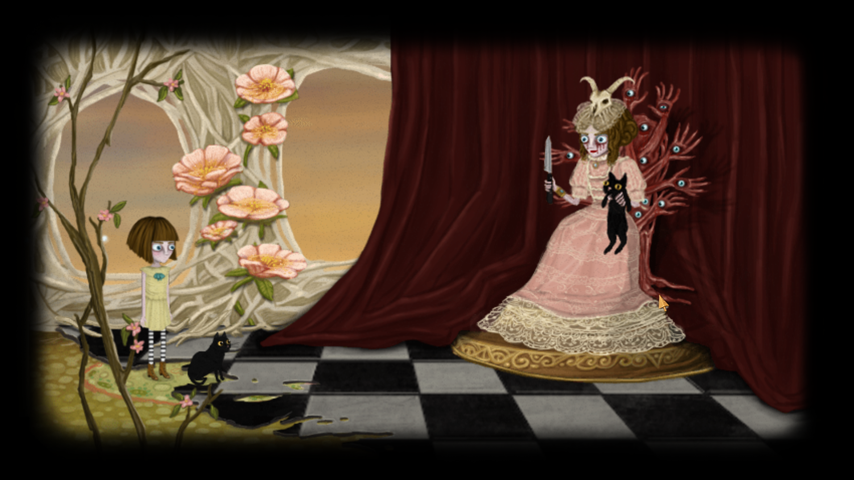 Fran Bow has been in production for three years but only now has it got its first official trailer. Oh, and a release date of August 27th. Before you get to watching that trailer, a warning: it is not for the faint of heart.

The game is about Fran Bow, a young girl struggling with seeing her own parents dismembered in her home and an unspecified mental illness, who decides to escape after waking up in a mistrustful mental asylum. Fran’s journey to reunite with her beloved cat, Mr. Midnight, and return to her Aunt Grace’s home is riddled with terrifying visions that vary between gore-laden sequences set in what seems like a parallel nightmare realm, and more bizarre and fantastical scenes involving demonic storybook creatures, steampunkish machinery, and… a family of pinecones? Yeah, it’s weird.

You’ll also be able to play as the cat

The chilling contrast between Fran Bow‘s cartoonish, pastel-colored world and startling violence calls to mind the paintings of pop surrealist Mark Ryden. Aside from its disturbing visuals, Fran Bow will also feature an enormous cast of characters, some old-school adventure game-style puzzles, and a few arcade-inspired mini-games. You’ll also be able to play as the cat! For a similarly violent and feline-filled horror adventure, you should also check out The Cat Lady by Harvester Games.

Fran Bow launches on Windows, Mac, and Linux on August 27 alongside a free demo.