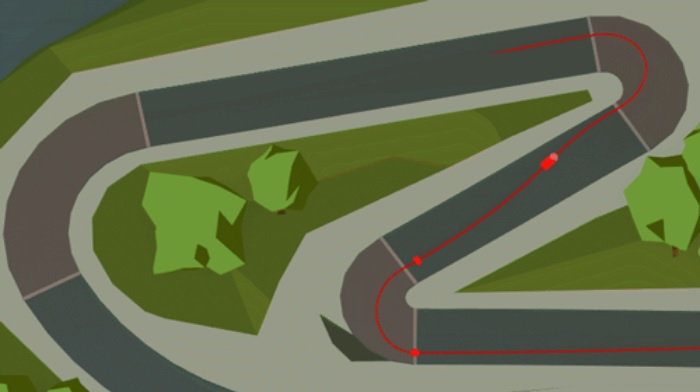 You’re a kid, you’ve never driven a day in your life, and in the distance towards the back of the arcade sits a partially enclosed cabinet that crudely approximates the dimensions of a race car cockpit. Some version of Pole Position (1982), probably. It has a driving wheel! And foot pedals! So you jam a few quarters into the machine and crush the gas as soon as the game starts. Seconds later your tires are chewing up the lawn. First you under-steer, than you overcompensate. A minute goes by and the machine is already asking you for more quarters.

This basic problem, that most people are really bad at driving really fast, in addition to causing the loss of countless lives, has been responsible for the on-going divide between simulation racing games and their less realistic but more accessible “arcade-style” cousins. Anyone interested in a robust physics engine and shaving milliseconds off their lap time has Assetto Corsa (2014), while anyone not interested in spinning out every ten seconds has the latest Need for Speed or Mario Kart to fall back on.

A recently announced game by Nic Tringali, creator of last year’s space-exploration text adventure Sun Dogs, looks like it could bridge some of that gap. According to Tringali, the project, called Vienna Automobile Society, aims to “recreate the tension, excitement, and split second decisions made by racing drivers.” But instead of using conventional steering, the game will have players navigate tracks by directly controlling the path of their car.

“I follow Formula 1 pretty closely, and I wanted a game to specifically bring out the way those drivers race,” says Tringali. “They’re in full control of the car, but in the bigger picture, they navigate the track, decide how to take turns, not crash while closing a gap, and so on.” By controlling the car’s “driving line” instead of its steering wheel, he hopes players will be able to focus more closely on the higher level drama and strategy of racing.

In this way, it’s like FIFA for racing, giving players shortcuts so that they can focus on higher levels of play. Rather than worrying about handling or technique, the emphasis will be on choosing the right path and shifting gears at the right time. There’s also currently what Tringali is calling a “limited juke maneuver” that players will be able to use to “avoid crashes or to quickly get around someone.” He says that while other ways of interacting with the tracks haven’t been ruled out, he wants to keep everything simple, making sure any additional controls are easy to understand and have a clear impact on how the player controls her car.

Designed for up to four players, Vienna Automobile Society is reminiscent of recent local multiplayer games like TowerFall (2013) and Nidhogg (2014) that try to distill a competitive experience down to something more fundamental and immediate. While Nidhogg turns fencing into a frenetic variant of Rock-Paper-Scissors, Tringali’s new project looks to be capturing the tightrope balancing act of a slot car race. He says the game could be released as early as the end of this year, and plans to post regular updates on its development at the game’s website.