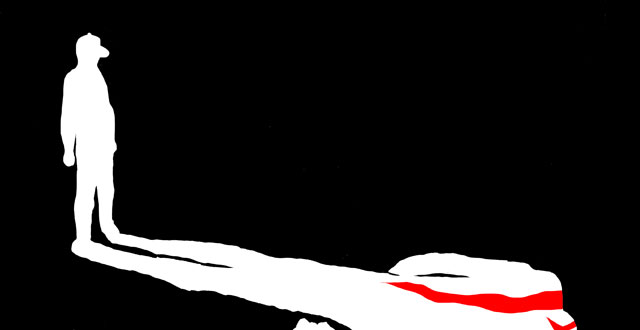 Today I am Kratos. Today I fight a god.

He is now on the ground.
It is now beginning.
I approach him.
I pick him up.
I beat him.
He screams.
Blood.

The man I am beating is a god, Helios, lord of the risen sun. My punches cause eruptions, bursts of light, to cry from his eyes and mouth in luminous pillars.

Circle.
Circle.
Smash.
Smash.
Blood.
Blood.
Light.
Light.
My thumb is dancing.
It is hard to care about why.
I place a hand on each of his cheeks.
I twist off his head.

A moment in time: a hallway full of thirteen- and fourteen-year-olds, most seated in a rough circle on the battered grey-blue carpet. The walls are glass, and outside the day is as grey as the eyes of the boy at the center of the group. All are staring at the boy, and the girl he faces. Outside the circle, a tall, awkward boy stands holding a pink-and-brown tennis shoe. The boy in the center is facing a girl, slight of frame, in a state her parents might call “developing,” arms folded across her chest, too angry to cry. She is shouting.

A moment in time: a hallway full of thirteen- and fourteen-year-olds, most seated in a rough circle around a grey-eyed boy and a mousy-haired girl. The girl is shouting. The boy’s mouth is a set line. Outside the circle, a tall, awkward boy holds a pink-and-brown shoe, which matches the shoe on the mousy-haired girl’s left foot. Her right foot is shoeless.
The girl stops shouting for the space of a breath, and the grey-eyed boy begins talking, words coming in a heightened, steady tone at an even rhythm, as if the boy is shaping each word to illustrate how thin are the strands of his control.
The muscle above the girl’s right upper lip twitches. She closes and opens the fingers of her right hand. Twice she opens her mouth to speak, but twice the boy’s steady, barely-governed voice grows in force and volume to drown her out.
He points at the tall boy, and then at the girl.
Two more words escape the boy before her open hand strikes him across the cheek, breaking the rhythm of his speech and shaking loose whatever else his steady voice might have had to say.

I heard a story once about a father and son, both of whom were World of Warcraft players. The father told his son to be careful with his gold, but the kid went out and spent his money on low-level items that he soon outgrew. (Do not fault him; we all make this mistake.) Before long, the son was coming to the father for money, asking for gold for this armor or that mount, and the father said, “Son, you should have been more responsible.”

We worry so about the presence of violence in videogames. Shouldn’t we expect games to try to teach the cost of violence?

And so the son started making good choices about his money. Not too long after that, the son had more gold than the father, and the father came to the son to ask for a loan, and—of course—the son said, “Dad, you should have been more responsible.”

The son made choices about his gold, and learned because his choices had consequences. This is how we all learn.

We could learn about violence the same way. Better to frivolously spend fake gold than real money; better too to shoot aliens than beat up kids on the playground. To know the pain of hurting a digital friend, rather than that of hurting a real one. We worry so about the presence of violence in videogames. Shouldn’t we expect games to try to teach the cost of violence?

A moment in time: a rough circle of thirteen- and fourteen-year-olds stare at a mousy-haired girl as she slaps a grey-eyed boy across the cheek.
There is a moment of perfect stillness.
The girl turns her head away, almost embarrassed. She steps over the circle of her audience toward the tall, awkward boy, who offers her the shoe.
The boy stands, still unmoving, in the center of the circle. Slowly, he moves a hand to his struck cheek. He rubs it deliberately. He takes a deep, measured breath. He takes another. He turns to follow the girl.
From the circle of onlookers, another girl stands up. She is at least as tall as the grey-eyed boy, and more solidly built than the other girl. She steps between the boy and the mousy-haired girl. She says something in a low, certain voice.
The boy’s hand is swift enough that everyone in the audience seems surprised to hear the sound, the sharp, dry crack of skin on skin.

These are the things I do, to remember. “He” for “I.” “The boy” for “the man.” Grey eyes, when mine are as often blue as grey. I find it almost impossible to type the words: I hit her. And then the desire to revise, to reframe. To trade in “struck” for “hit.” Or “slapped” for “struck,” any excuse to delete. A sick desire for the passive voice. “She was struck by me” seems easier, places me in the background, barely a part of the sentence, only an indirect object.

And of course, that beautiful imprecision: “another girl.” This ambiguity I cling to for reason of another shame: I cannot remember her name. Her first name was Kim. Her last name began with a K. Her first name and last name were similar. She was curvy, for someone so young, and her hair was as blonde as if it had been bleached, though it hadn’t. I can see her face, her eyes like remembered sky, opened wide in shock. I can remember everything but her name.

Such an absurd excuse for violence, let alone between me and Kim. My friend stole her friend’s shoe, hid it somewhere, and I refused to tell where. So unspeakably petty, so trivial, so irrelevant to me and her. We both stepped in to defend our friends. We both ended up getting hit.

It was the consequences that made me sever the tie between myself and the furious boy I was, that make it impossible for me to see a train of thought that might lead to violence. This was probably the hardest lesson I had to learn as a young person. It was the day I understood that the price of violence—of any violence—lay not in the flowers, or in the orthodontics, or in the lost friendship, but in the fundamental alteration of myself: I became someone who had done violence.

Kratos lives for blood. He is so violent that he was fired from being the God of War because he was too violent. He kills civilians when it is convenient to do so. He kills his enemies without a thought. He kills with ease all the horrors of myth. As Kratos, I have decapitated gorgons, broken the backs of banshees, torn the wings off harpies, thrice decapitated Cerberus, and twisted off the Minotaur’s head by the horns. In God of War III, I have killed way through the whole Greek pantheon, and still Kratos is unfulfilled. When I finally kill Zeus, the purported goal of this festival of blood, I find Kratos so empty that he enacts the only logical next step: He turns his sword on himself, and falls on it.

It does not bother me that Kratos is violent. It bothers me that he learns nothing from his violence.
He never doubts it or questions it.

I have yet to find an answer to the simple question, why. Not for Kratos; his motive is always vengeance. But why would the developers of the game so relish death? Why is there nothing else for them? What do they want us to learn, to experience, to be, other than covered in the blood of gods? I have no answer to this.

In God of War III, and most of the games I’ve played, violence simply is. Killing is a part of the vehicle of the game, the mechanism by which the story functions, some means to an end, or something the game’s developers took for granted. It is so assumed that violence is a part of videogames that almost any conversation about videogames becomes a conversation about violence, becomes a campaign against videogame violence, becomes a nearly absurd lawsuit in which a man who has made his fortune, his career, his name, and arguably his governorship on media violence seeks to end violence in one medium. But this does not in itself concern me.

It does not bother me that Kratos is violent. It bothers me that he learns nothing from his violence. He never doubts it or questions it. He loses nothing to it and takes nothing from it. It consumes his family, his life, his afterlife, and his godhood, but his commitment to it never wavers. The consequences of his violence never touch him.

I do not fear that violence in videogames teaches us to be violent.

What I fear about violence in videogames is that it teaches us nothing at all.

Imagine a game where each act of violence has a cost to the player. At first, the cost comes in harsh looks and hurt stares, but soon, allies leave, so that each step toward violence makes the game more difficult. Before long, you would start to let things slide, ignoring enemies you’d otherwise engage. By the end you’d worry over every violent opportunity, carefully examining each situation for a peaceable solution. Maybe the ending of the game shows you every face you’ve lost, every enemy you’ve hurt, every ally you’ve alienated, and maybe, in a violent playthrough, you end the game alone.

Thirteen and trembling in my fury, what could I have learned from a game like this?