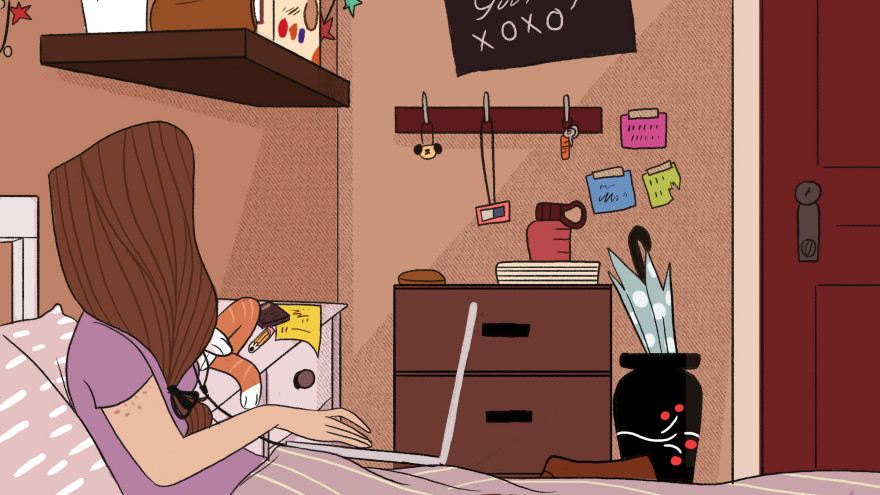 I never lived in the dorms at my old university. But I have had my fair share of semi-unpleasant roommates. The scariest part of social anxiety, at least in my personal battle with it, is that it can stem from being thrust into a room with complete strangers, or even just being in the midst of any old acquaintance. In one particular apartment I lived in, a roommate of mine lived in a curtained-off living room. She was sensitive to noise, particularly if myself or the friend I shared a room with came home in the dead of the night after work or studying late. If I wanted to make food or grab a snack, I almost always opted to starve due to trying to avoid an awkward interaction with another person. That stress-inducing accidental human interaction is the premise of bite-sized interactive visual novel The Average Everyday Adventures of Samantha Browne.

The player is in Samantha’s thoughts, and share her anxieties

Samantha Browne is a short game, easily finished within 10 minutes, with multiple routes to take. You can play it safe, as I did, or you can lead Samantha down a path of even greater sadness and starvation. The game’s goal is simple: make oatmeal in the communal kitchen of Samantha’s dorm… except that it’s anything but simple. Samantha struggles with social anxiety. She worries that her flatmates will judge her, after an awkward run-in with a girl that judged her eyeliner abilities some time ago. Samantha doesn’t enjoy socializing, and would prefer to avoid human interaction entirely.

I relate a lot to Samantha. At the start of the game, she’s seen instant messaging with an internet friend, as she struggles to tell the truth about why she’s afraid to make oatmeal, or lie about the occurrence entirely. Much like Samantha, I also found solace in binge-watching television shows (in my case: anime), and hiding from the world behind a computer screen. Especially in college, where socializing is essentially all anyone around you does, it’s a harrowing reality to be too afraid to partake.

This is where Samantha Browne becomes a survival horror of sorts. As Samantha, you make pointed choices. The hallway is long, does Samantha rush to the kitchen, or return to her room to hide? The microwave is louder than expected, does Samantha deal with undercooked oatmeal, or suffer through the painful worry of a flatmate complaining? It’s these choices that make the player feel like they are Samantha. The player is in her thoughts, and share her anxieties.

In my playthrough of Samantha Browne, I was courageous. I made all the “right” choices. I was cautious when I felt caution was needed. I made sure my hunger meter never dropped too low, because that’s priority number one. I made all the right steps to get what I needed. I was playing as Samantha as I would never play as myself. Maybe others like me can learn from this sweet little game. The world isn’t actually as scary as it seems, and chances are, those girls chatting in the communal dining area don’t give a shit if you’re making noise while making oatmeal. In the meantime, it’s baby steps. And solitude is sometimes good.

The Average Everyday Adventures of Samantha Brown is available now on PC, Mac, and iOS for the low, low price of $0.00.