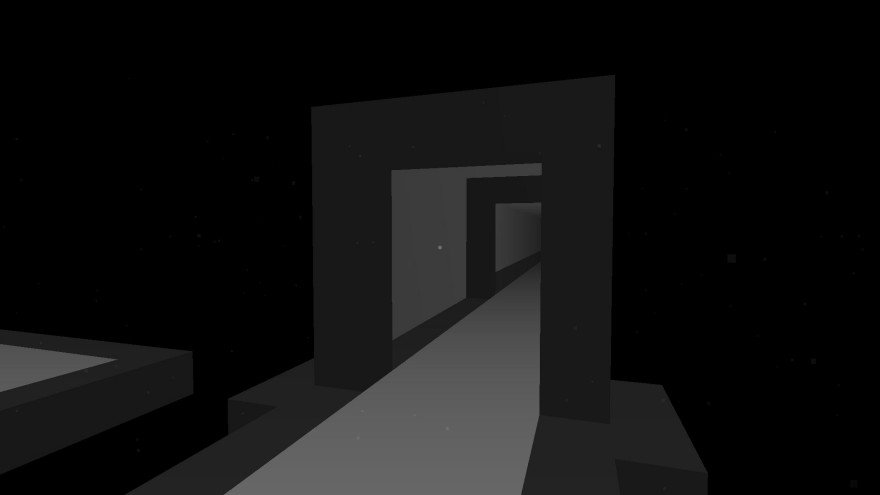 I like it when videogames play peek-a-boo with me. Yes, please, treat me like a toddler. I mean it. I am not yet beyond the delight of a magic trick; a spatial sleight-of-hand. And Voi has enough of them to warrant your curiosity. This is a game in which I spent a good five minutes going back-and-forth, side-to-side, reliving the couple seconds of the gif below in my own time, free from the never-ending repetition of the gif’s structure.

First you see a lengthy hallway, next you see a black void where nothing could ever exist. Where did the hallway go? Oh, look, it’s still there if I sidle back this way. How is that possible? Ad infinitum.

Naive as this sounds, I’m relishing the fading thrill of non-Euclidean architecture in videogames. And it is fading. Having been through what feels like an exam on the concept in Antichamber back in 2013, and then seeing its impossible structures and space-swallowing corridors cropping up in other games, the surprise of it all is getting lost on me. For example, apart from that conscious attempt to grok full appreciation of the not-corridor, I walked through Voi‘s puzzles with the confidence of a steam roller, flattening their solutions almost without thought. I’ve solved them before, if not in these exact formations, then at least the same components and programming tricks needed to make them possible.

Fortunately, Voi does have something else going for it: a stern, black-and-white posterior. Its temple feels holy in its hazy silence. You walk through it wordlessly to reach the top of its central pyramid, unlocking a staircase at a time. Each new tier that you ascend to and enter crossfades almost seamlessly as it transports you from the pyramid hub to a fresh set of puzzles laid out before you. First, it gives you doors and buttons, second comes bells and symbols, thirdly it pulls out invisible platforms and floor-sized reflections. All of this building you up to eventually face the game’s greatest non-Euclidean structures (including a claustrophobic maze like a snake’s knotted stomach) as if an otherworldly ceremony, a rites of passage.

Tonally, it’s flawless. But otherwise it’s a proof-of-concept that needs to go much further to deliver a hefty punch to the old cogs clicking in my brain, or better yet, to have me sat before my monitor agape and astounded at some new architectural hypothesis. And, thankfully, that’s exactly what its creators are going for: “Voi will also be receiving content updates for the foreseeable future,” they say. Watch this space.