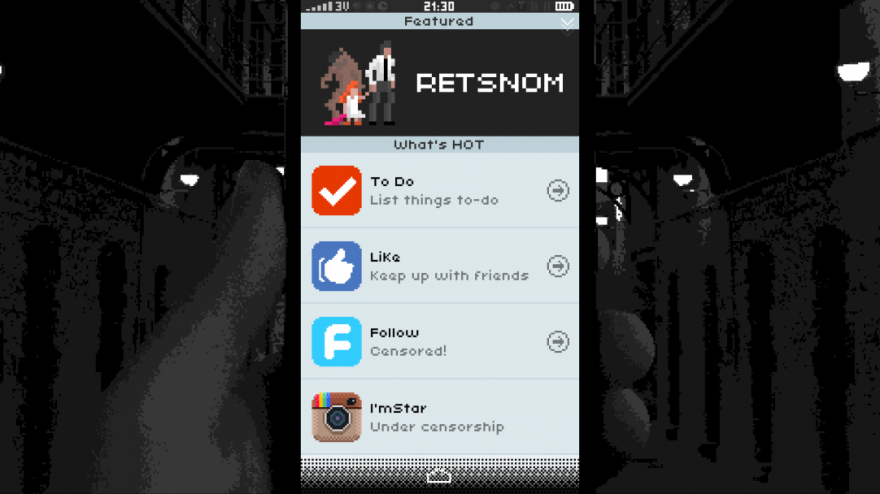 A few days ago, a terrorist attack devastated a major city. Officials don’t have a body count for you but it’s bad. Do you really need to know the exact number? Would that change anything for you? Anyhow, officials now want to find out how this happened and prevent future attacks.

That is the opening premise of Replica, and from that fact pattern alone you can almost sense callous indifference to civil liberties coming around the bend. And so it is: the game challenges you to piece together a story by rummaging through someone else’s cellphone. There may be some utility to the material on this phone, but much of what you’re digging through is relatively innocuous stuff. Of course, that innocuous stuff has value; our lives are largely made up of innocuous stuff, stuff we’d rather not have someone dig through. But here you are, sifting through the digital sediment of someone’s life.

The moral arc of this universe bends towards invasions of privacy. Fiction, after all, excels at creating the sort of urgent “ticking time bomb” scenarios where questionable behaviors can be justified. Indeed, Replica takes place in a virtual country where governmental powers are not really a concern. But who are we kidding? This is also our world. The basic scenario in Replica closely resembles attempts to unlock the San Bernadino terrorists’ iPhone, and Apple’s decision to not comply with court orders to break their device’s encryption. There’s only so much you can do to fictionalize these premises; they are part of the world we now live in.


Replica is concerned with the act of surveillance, but also with its effect on people. There is, of course, the surveilled, whose life gets picked through by strangers. But there is also the person tasked with going through the intimate details of a stranger’s life. That work is taxing in its own way. Just because your life isn’t being picked apart doesn’t mean it won’t be affected. In the end, surveillance picks apart everyone’s life, and Replica will watch it take its toll.

You can find out more about Replica on its website, purchase it on itch.io. and vote for it on Steam Greenlight.