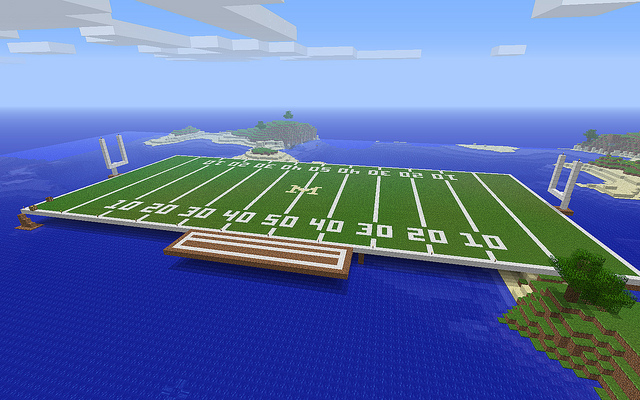 Videogames and sports are kissing cousins and are part of the  same family of life known as play. With the rise of esports, the conversation about the ways that PC games can learn from the likes of football and baseball has renewed. Over the next few weeks, iQ by Intel and Kill Screen will explore how these worlds intersect, whether they know it or not.

For a game that essentially comes down to tackling the guy with the pointy leather ball, football is a complicated sport. With forty-six different players from two rosters shuffling on and off the gridiron in myriad formations, it can be difficult to keep up. That goes even for someone like me, who watches pigskin if not religiously, then pretty darn regularly.

The challenge to a network such as ESPN lies in making the game accessible to the masses, not just the fanatics. This requires vital data to be presented clearly and cleanly. Because playing a video game requires you to be aware of your actions at all times, the Madden series has this down pat. We’ve considered in the past how the experience of watching esports could be improved by adopting football’s camerawork. But we were wondering if this works both ways.

Could the interfaces and graphical displays of video games make watching football effortless?

If anything, games are mooching, he claims.

As I soon found out, some people are vehemently opposed to the idea that pro sports could learn any tips and tricks from their digital younger siblings. When I spoke to the guy behind Brooks Baseball (who asked to not be identified or quoted in this article), a company that collects and analyzes pitching data, he was emphatic that video games have nothing to do with sports. If anything, games are mooching, he claims. To his point, the world of sports and sports video games do have symbiotic relations. The yellow line that shows the first-down marker appeared in football broadcasts before appearing in football video games. And MLB: The Show eschews the virtual strike zone of baseball telecasts in favor of realism. But that’s just one take.

“[It’s] all about using technology to engage and enhance experiences of all kinds.”

Not everyone is so shortsighted. I also talked to Joe Miller of Sportvision, who specializes in making live sports more watchable with graphical overlays, such as the aforementioned yellow first-down marker. His background is in gaming. He got his start at Atari, and was a senior V.P. at Sega during the Saturn launch. “If you Google me, you will see people claim that I was the father of the 32X,” he tells me.

He also produced a lot of the Sega sports games. So it isn’t surprising that there are similarities between Joe Montana Football and the things he has up his sleeves. “[It’s] all about using technology to engage and enhance experiences of all kinds, taking what I learned creating interactive experiences for the gaming audience [and] leveraging that for sports enthusiasts,” he says. In other words, they’ve started to adopt the language of video games.

One way is simple, really: with name tags. Something that always comes up when casually watching an unfamiliar pro team is, while you may know the big names, it’s hard to tell where they’re lined up. This isn’t a problem in the forthcoming Madden 25. The names of key players are right there on the screen, labeled beneath the athlete. Last year, Sportvision started doing the same thing for FOX during live broadcasts. They can tag players with their names, their completion rates, how many yards they have, and other data to keep us clueless fans in the fold.

That’s not all. They can use this technology to direct our attention to a play that’s about to unfold. “If it were 3rd and 12, and it was pretty clear it was going to be a pass play, we have the ability to put a tag above the players who are likely to be in the action,” says Miller. “It’s a way to highlight expected action with data before it happens.” This is, of course, crucial information in Madden. When a player needs to check his wideout patterns against a defensive formation before the snap, he calls up the eligible receivers with the click of a button. They’re labeled, clear as day.

One of the compelling stories that can easily go unnoticed over the course of a football game are the individual matchups. Who’s one-upping who? At a glance, it can be hard to tell if a first-round cornerback is shutting down a star receiver. But you can’t miss it in Madden. The guy catching the ball and the guy trying to make the tackle are surrounded by circular banners. And besides, you’re running the play. In order to make these one-on-one showdowns stand out, Sportvision is working on a way to display not only the distance between two players, but how quickly the defender can close the gap, or how the receiver can maintain some open space and break away.

Soon, they will be able to capture the motion of every player on the field and the ball in real time, Miller assures me. This implies that, in the future, watching football will be as interactive and customizable as playing a video game. This has fantastic potential. You could hone in on the players you wanted see, watching the game from the position of, say, the defensive safety, who tends to drift off the edge of a television screen. The downside is that the technology designed to make sports easier to watch would become ridiculously intricate. But this is the paradox of football—that something so simple could be so complex.