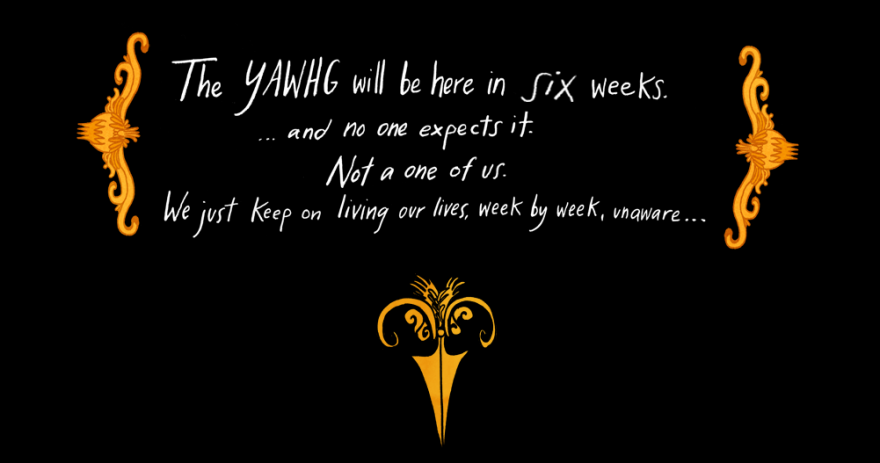 It all starts at the tavern.

It’s been years, but even from my limited Dungeons & Dragons experience, I know an adventure always starts with a pint at the bar. At the tavern, you can meet strange cloaked men looking for foolish journeymen, watch incognito royals try to slip out of their playpen, or get in-game hammered and in-game hit on every high-fantasy humanoid in the in-game joint.

Even Baldur’s Gate: Dark Alliance, a video game with a Dungeon Master’s Guide weaved into the programming,  started this way, though your only course of action was to slay a bunch of huge rats in the basement. You can make the tavern your starting point in Damian Sommer and Emily Carroll’s The Yawhg. The difference between the duo’s game, Baldur’s Gate and D&D is that an actual tavern may be the most appropriate place to play The Yawhg.

The Yawhg is a game that, despite its RPG structure of stat building and text reading, flourishes in a more jovial group environment. Even though it has finite outcomes, it’s an extraction of D&D‘s zany x-factors that have kept players rolling the dice for decades. This is difficult to appreciate alone, but uproarious with others.

The Yawhg is approaching your city. The unseen bringer of destruction is six weeks away from turning your ye olde metropolis into a parking lot. You are told this, but nobody knows this. The civilization is blissfully unaware that any danger is lurking towards them. Each week is a turn, a turn your character can choose from seven areas to loom around, each with two different options to keep busy.

The Yawhg is difficult to appreciate alone, but uproarious with others.

You can clean up the alchemy tower, you can meditate in the gardens, fight in the arena, vigilante in the slums and all with a variable of outcomes. Your ability to perform these actions, each usually presaged by an unforeseen event, is dependent on your abilities, which range from magic to physique. There are few bad options, but plenty of bad outcomes, and remembering where your character stands dictates your fate.

But a city is not made up of a single person, and The Yawhg is not a game that should be played without others at the table. Alone, you will just plod around in spaces, chuckling at the trouble you’re sliding into, getting lost in the woods and the failures to keep enough change in your pocket to toss at a street urchin. It’s a charming fantasy, but hardly reflects that this is the end of the city, not just your way of life.

With all four players at once you don’t get a linear six-week journal, you get a jumbled web. You may not notice in your first game, but some of your encounters and choices linger. Planting a magic bean in the garden will at a later turn become a strange plant, and later after that a wish-granting gnome. Likewise, players carry baggage. A werewolf bite will have repercussions, and that destructive curse can travel cross-town and infect an unsuspecting victim.

When the city is stuffed with four active, kinetic adventurers, achieving, questing, fighting, failing, falling, falling in love, hurting, hurting others, spell-casting, peacekeeping and plundering, reaching your end-of-life goals is a thorny task when you keep stumbling over the wake of others.  You are oddly competitive, despite your common goal of surviving the Yawhg’s wake.

This game is Dungeons & Dragons in an EpiPen, the glory of good and bad decisions among friends, broiled into a short and satisfying quest to laugh about. Certainly, you play to win on the tabletop, but how badly you stumble along the way makes for the better memories. Traps, surprises, glorious mistakes. Just like in Dragon’s Lair, it’s an achievement to win, but entertaining to lose. And in both D&D and The Yawhg, failure best entertains with an audience, cheering each other with their drinks in hand.