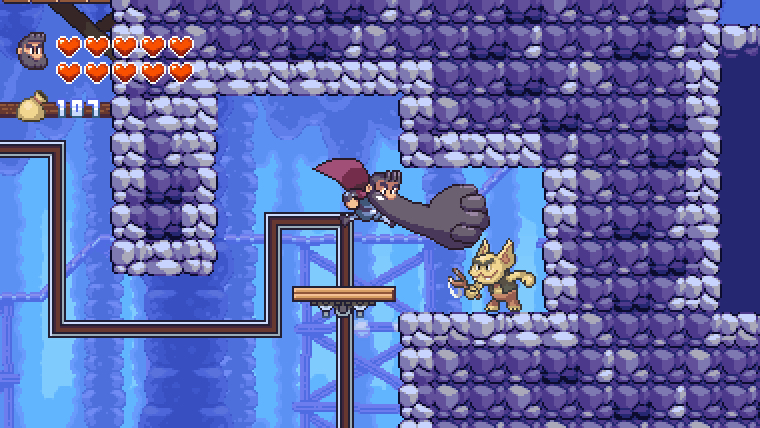 Inspired by SNES, Genesis, and GBA classics, Beard Blade is an eccentric 2D platformer that follows the adventures of a farmer as he struggles to rid his town of troublesome imps. After an encounter with a magically-skilled barber, the farmer takes on the pseudonym Beard Blade, and his beard becomes not just a physical manifestation of his masculinity, but also his greatest weapon in battle.

The Kickstarter trailer for Beard Blade begins with an animation of the pirate-like imps attacking the farmer’s village with cannonballs, but he saves the day by catching a projectile with his beard and using it to sink the imps’ ship. The video goes on to exhibit the full power of the beard, helping the protagonist to fly, punch, climb, and slice his way through each stage.

Beard Blade is the first game from Glovebox Games, and yet, with the studio’s choice of celebrating beards, you’d never know it. The studio’s focus on beards means it falls in line with all the big game studios with many games under their belt doing the same—it seems that next year will truly be the year of videogame beards. But Glovebox epitomizes this trend, hell, perhaps it’s even an unplanned satire of the direction videogame masculinity is going. It’s a game about weaponizing a beard after all.

Learn more about Beard Blade on its Tumblr and support the game on Kickstarter.