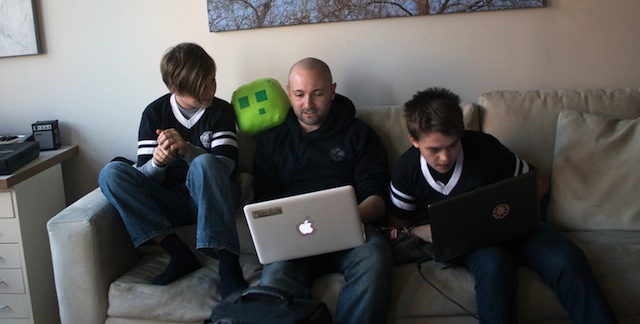 After leaving his job as a game developer at Nickelodeon, Mike Fischthal spent the summers of 2010 and 2011 teaching 9-12 year olds game design at a San Francisco camp. He loved the experience, and when he moved to New York shortly thereafter, he set up shop doing private tutoring in game design. Before he knew it, he had clients six days a week and requests from organizations all over the city to collaborate.

“I sensed,” says Fischthal, “that there was a bigger business there.”

And the business wasn’t just teaching game design. While working with students, Fischthal was continually surprised at the DIY skills the kids demonstrated, in stop-motion animation and video creation. Whenever he asked his students how they learned these abilities, they would invariably answer, “Google”.

“So Pixel Academy grew into this idea of all digital creative art,” Fischthal says. “Providing kids the opportunity to work with professionals and not have to just learn on their own.”

Today, Pixel Academy consists of Fischthal and four other teachers, along with more than a dozen regular pupils and regular workshops at the New York Public Library and local museums that regularly draw 40 to 50 kids. They teach a wide variety of tech skills, from game design to 3D printing, web design, programming and music composition.

The organization is growing so fast, in fact, that they have started a $20,000 funding round on Fundable. With the money, Fischthal hopes to open a full-time Pixel Academy location, that can house all of the equipment and students, who will pay $40 per lesson. He wants future funding to come from the lesson fees, along with private equity.

“I want Pixel Academies all over the country,” Fischthal says.

Which raises the question: why establish private tutoring shops all over the country when schools are already built? Why shouldn’t, in other words, schools teach the skills that the Pixel Academy does?

“We don’t know what is going to be big in ten years,” Fischthal explains. “We could make a big push for 3D printers in schools and teach CAD and that would be fantastic, but in 18 months when there is a new kind of 3D printing, they aren’t going to be able to keep up. We’re free to stay on the cutting edge in a way schools never will be able to. We have no bureaucracy.”

But if these skills are best taught privately, such instruction runs the risk of excluding the people who need preparation for a new, code-heavy economy the most: the underprivileged and underconnected. To address this, Fiscthal points to the free-to-attend workshops that Pixel Academy already runs, where he works with kids who have never before used a mouse. He also plans to have scholarships at the Pixel Academy, and to start a program wherein older students can have free, seven-day access to the resources of the academy if they donate have their time to teaching younger students.

“We’re trying not to cater just to the kids that can afford an exclusive service like this,” he says.

The biggest legacy of Pixel Academy, ultimately, may be developing a curriculum to teach game design and other high tech skills to children. Almost none of the relevant instructional software is built with kids in mind. That may not matter.

“I want Pixel Academies all over the country.”

If you overcome some hurdles, the other stuff seems to come pretty naturally. Kids are used to thinking in terms of games and it makes more sense than it does to adults..

Case in point: two eleven-year-old pupils. One of them is working on 3D art in Blender, and the other is building script in Unity.  Together, they’re making Pixel Academy’s first ever first-person shooter.