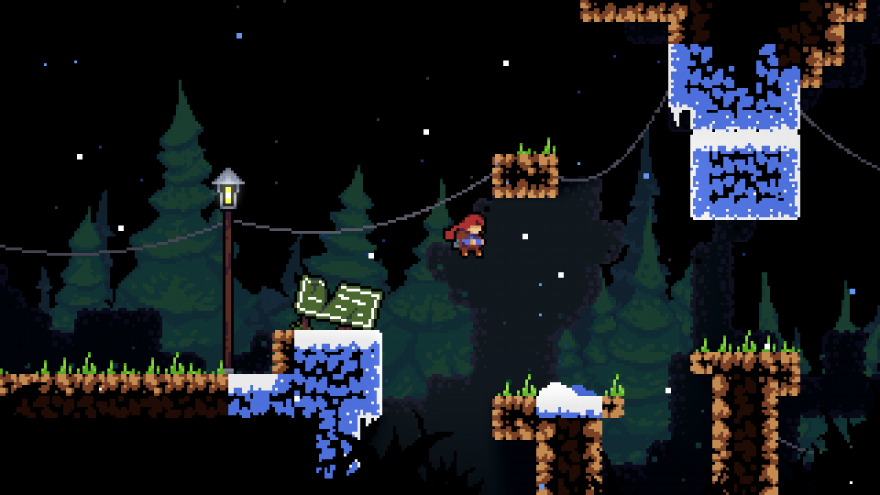 There’s a mountain near my house where I grew up and it was a regular exercise for teenagers to climb up it as the sun fell, and then race back down chasing the light. Since it was a small peak, and since I lived in the foothills of the Appalachians, it seemed like a bent grandfather to the craggy peaks of the Rockies or other, more noble mountain ranges. Certainly, scaling that mountain in its green glory, bears little resemblance to the snow-capped summit that awaits you at the top of upcoming game Celeste.

pixel trees underneath a star-lit sky

A brutally difficult PICO-8 game about climbing a mountain, Celeste is being built out to a larger experience, set for release in 2017. Combining the talents of Noel Berry (Skytorn) and Matt Thorson (TowerFall), the original jam version of the game, made in four days, was a 30-level precision retro-platformer that seemed perfectly designed for speedrunner-like reflexes. Celeste seems more reminiscent of Thorson’s Mario Maker levels and his older, tough-as-hell platformers than Towerfall, but they—like all mountains—share the same bones.

There isn’t a lot of information out on Celeste right now—aside from a grand look at the art style, which promises to be more detailed and rich than its predecessor, and the acknowledgement from Thorson that the game already has 90 levels. There’s large chunks of art littered across several Twitter accounts showcasing the 3D overworld, and a set of pixel trees underneath a star-lit sky. All hint at a game sure to interest those interested in climbing the mountain of difficulty that Thorson and Berry can bring to the table.