The opening of Life is Strange from Dontnod Entertainment is, at least at first, decidedly unepic. Maxine, better known as “Max,” sits in her photography class, flipping through her doodles and taking a selfie with her Polaroid camera while being shown up by the teacher’s pet.

We are already inside Max’s head. We have a vague idea that the trusted teacher at the front of the room and the parents who are so skilled at texting don’t have any clue what it is that Max really needs. A few minutes later, when she saves her childhood best friend from being killed in the school bathroom, no one authoritative is ready to believe her that a threat is present. Max discovers she is Chosen to be a time-travelling, self-conscious superhero, but this soft start is what feels most significant.

Since the time of Arthurian legend, or even further back with David and Goliath, the cultural narrative of the Teen Chosen to Save the World has been about as close to a universal theme as cultures get, and videogames are riddled with the trope, too. Whether it is Ness saving the world from the Universal Cosmic Destroyer, Giygas, or Ash Ketchum catching ‘em all, some of the medium’s most iconic protagonists have been 18 or under.

Whether the prevalence of the teen hero is due to adult writers pandering to the most lucrative commercial audience or a symptom of adults trying to explain the world to a younger set, it doesn’t seem to matter. This evolution seems to have tracked along the same timeline as when the latchkey kid era ended and gave way to helicopter parenting. Starting in the mid-1940s, it became more common for kids to be home alone until it became a norm for many kids through the 1990s. More kids (if they were in a two-parent household) had both parents working and might come home from school to an empty house or go to friends’ similarly empty houses.

In addition to a lower level of supervision, these latchkey kids often also had freer ranges of motion. As a kid growing up on military bases and in slightly rural suburbs, I could sometimes wind up miles from home on my bike in afternoons and that was fine as long as I was home for dinner. While it was obviously extreme, the characters in Pokemon having space to play their pet-fighting sport didn’t feel that outlandish.

Now, parents can face legal action for letting their kids be “free range” and constant supervision to minimize risk to the child has become the new normal. This new attitude has crossed over to games, too. We’ve gone from seeing parent characters who are comically negligent to villainously controlling and out of touch. Kids are overscheduled with after school activities to keep them “out of trouble” and hyper supervision. Psychologist Madeleine Levine calls it good intentions gone awry, confusing overinvolvement with good parenting. However, the overriding message to kids receive is more likely to be, “I’m here to watch you because otherwise, you would do something wrong.” And that doesn’t exactly create a safe space for a child to ask questions.

I’m here to watch you because otherwise, you would do something wrong

This evolution makes sense, given that most videogame writers are parent-age. So, then, is it the self-loathing of the writer that makes parents in videogames so incredibly inept?

As a mid-twenty-something, I would like to think I am still fairly in touch with the teen experience, but I think I might be prematurely aging, because I was honestly surprised to read reviews criticizing the dialogue in Life is Strange. I thought it was charming and the awkwardness was just a side effect of teens experimenting with language while learning social graces.

There are fewer videogames featuring teen girls as protagonists than ones with teen boys, so it could just be the small sample size, but studios seem to be really struggling with capturing the uncertainty of angst of teen girls. Though some of its emotional moments are a little ham-fisted, Beyond: Two Souls added a great deal to the portrayal of the teenage girl experience. Players control a girl named Jodie Watson (played by actress Ellen Page) through the ages of 9 to 25 as she grows up while psychically linked to an ethereal force that gives her telekinetic powers.

Like time travel, this is something all teenagers can relate to, of course. But it actually ends up being a pretty apt metaphor for growing up and gaining power and agency that can be scary to your caretakers. In one scene, the player has the choice to go to a bar and meet up with friends as 16-year-old Jodie. Her friends don’t show and she is left vulnerable to sexual assault by drunk, older men. Like I said, it’s a little obvious, but Jodie’s decision to defy her caretakers is motivated by being unable to talk to them about her experience and by being forbidden to have experiences out of their sight. A similar thing happens in Life is Strange.

The stakes are high for Chloe and Max to keep their investigation into Rachel Amber’s death a secret. All signs point to an adult being at least complicit in the possible murder and kidnapping of Chloe’s friend. Kate Marsh’s suicide attempt (or death, depending on your choices) was preceded by adults not taking Max’s concern for her friend seriously. Chloe’s stepdad violates the trust of his family and Blackwell Academy’s students by putting them under surveillance without their consent. Even Joyce, Chloe’s tired but loving mother, shows signs of not believing Max and Chloe’s concerns about David the “step-douche” even after he hits Chloe. The message to these girls seems to be, “We don’t believe you, but trust us. We know the truth.”

We seldom see games like EarthBound or Pokemon anymore, where teens are left entirely unsupervised without there being consequences. Ness’s dad tells him over the phone, “Just remember, I’m always behind you 100%. Don’t be afraid.” He then lends his son a large sum of money without question.

We don’t believe you, but trust us

There seems to be an implicit trust offered to the adolescent characters in these older games. Now, we see teenaged characters like Max and Chloe in Life is Strange or Michael’s kids in Grand Theft Auto V making dangerous choices because they feel like they can’t trust the adults around them to hear them out without some kind of untenable retribution. In both the latchkey and helicopter eras, videogame parents prove themselves to not understand. Maybe this is an easy place to mine narrative tension, but it seems like the medium has some ground to cover before it can really reflect the complexity of the teen experience. And studios like Dontnod are doing the work. Joyce in Life is Strange does try to reach out to Max to help understand Chloe multiple times, but the girls don’t concede to accept adult intervention. They have too many examples of adults like Chloe’s “step douche,” the spineless school principal, and the school’s controlling donors to think that anyone in authority could really have their best interest at heart without their own agendas getting in the way.

The underlying fear is that their concerns will not be seen as valuable, so they stayed silent. At the end of Episode 4, it became clear that Max’s silence has a price and that even her time travelling power isn’t enough to make her a hero. If Chloe really is gone and she really is the captive of the deceptive, villainous teacher, I don’t see a clean way Dontnod can write her out of this corner.

If videogames find the answer, the healthy middle ground for the parent-child relationship, there wouldn’t be any narrative tension left. In that case, we might just have to talk to each other. 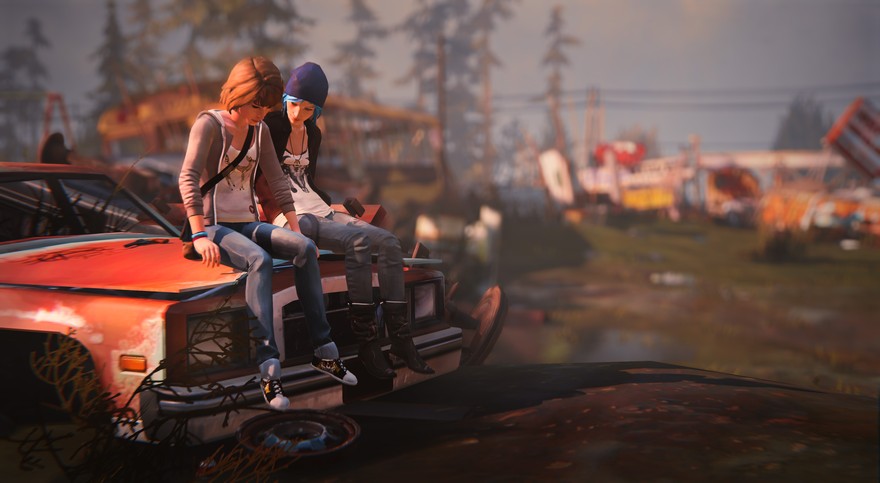