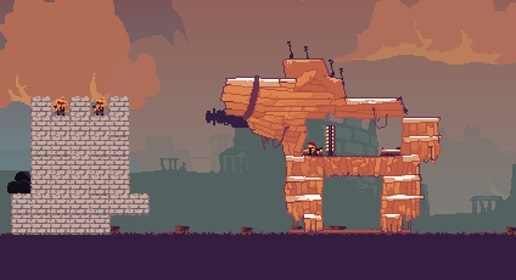 The Trojan War is a comedy and a tragedy, a series of deaths that history will remember by its errors rather its feats. When they teach the Trojan War, they talk about a beautiful woman whose face was enough for an armada to be launched and a large wooden horse that defeated an impregnable city.

When Atlanta-based game maker cottontrek talks about the Trojan War, they do so in a series of explosions.

Explojan Horse is not a game of subtlety. Constructed over a weekend for the latest incarnation of the Ludum Dare game jam, Explojan Horse is a cross between “an easily recognizable aspect of the classical era of history” and the historical comedies of Monty Python. These are not the battles of great men, constructors of a large trophy and trap, but rather some dudes with a really big gun.

The Trojan War was bloody, as most wars are, especially ancient ones. Homer describes in his epic a battle that is both richly detailed and violent: as a man is “he was run through with a pike in the soft bit below the jaw, and was dragged behind the chariot flopping like a fish caught on a fisher’s line.” Perhaps cottontrek’s over exuberant explosions are not too far off the mark.

You can find cottontrek’s full game Explojan Horse on itch.io.