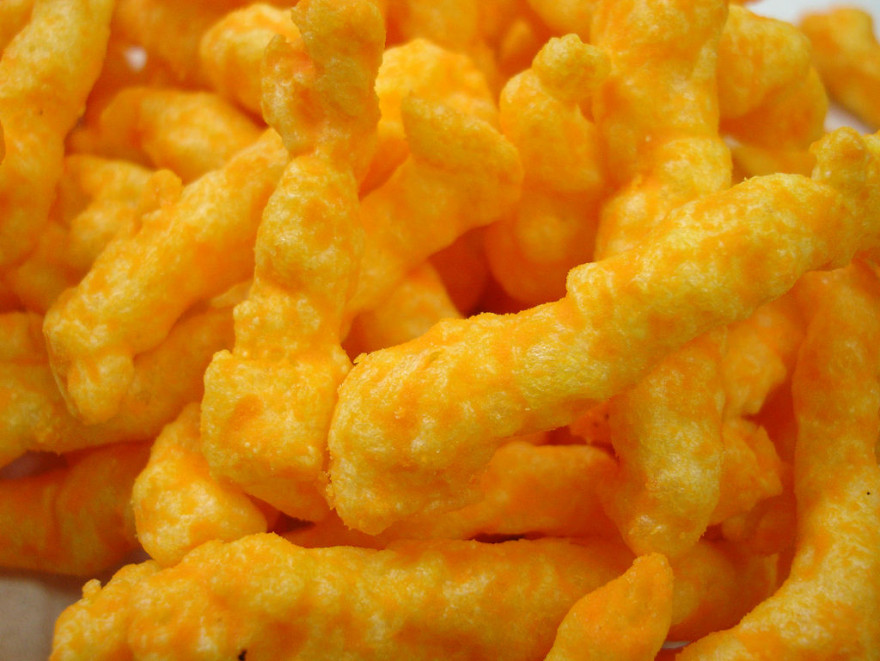 This past Sunday’s New York Times Magazine features a remarkable story on the junk food industry and its many secretive struggles for our mouths. Though the author, Michael Moss, kept his focus on obesity and nutrition, I couldn’t help but notice a few startling parallels with the many videogames I just can’t stop playing. Chief among them was food scientist Steven Witherly’s diagnosis of why Cheetos are so tasty and addictive, a trait endemic to a growing number of short, disposable games that sink their hooks in and won’t let go.

He calls the effect Vanishing Caloric Density. “If something melts down quickly,” Witherly says, “your brain thinks that there’s no calories in it . . . you can just keep eating it forever.” Though the concept is rooted in food, this idea–of something ephemeral, something that comes and goes quickly before we’re fully aware–seems rather connected to much of what we play today on tablets or smartphones.

With a salty snack coated in orange cheese dust, the consequences of mindless eating range from empty calories to high sodium intake to wanting to eat again quickly for lack of being full. With a dopamine-blasting quick fix like Drop 7 or Tiny Wings, the consequence is our time. Each example offers the same kind of repetitive gameplay with just enough feedback and challenge to push the player onward. Moss writes similarly of Frito Lay’s efforts at constructing, through rigorous scientific research, the exact combination of taste and mouthfeel that will encourage a snacker to eat just one more chip.

Howard Moskowitz is known as a food “optimizer,” and as such has helped big-name brands attract the highest number of customers not with marketing but with a close attention to the food itself. His work homes in on what he calls “sensory-specific satiety,” and it answers why many eat rather mundane foods in higher quantity than those foods with noticeably bolder flavors. “Big, distinct flavors [can] overwhelm the brain,” Moss writes, “which responds by depressing your desire to have more.”

The biggest hits — be they Coca-Cola or Doritos — owe their success to complex formulas that pique the taste buds enough to be alluring but don’t have a distinct, overriding single flavor that tells the brain to stop eating.

I’m thinking of the classic ‘pa-ding!’ of Mario collecting a coin. I’m thinking of the satisfying swoosh of swiping through an airbourne fruit in Halfbrick’s Fruit Ninja. Noted game scholar Jesper Juul, in his book A Casual Revolution, defines the feeling such actions give us as “juiciness.” The juicier a game’s mechanics, the more likely we are to fall under its spell and go back to it, time and again, like a devoted fan of Doritos reaches into that crinkly bag without thinking.

Popcap’s Peggle is an ultimate example of Juiciness — the game itself can be described as a take on Pachinko, where one deploys tiny silver balls onto a field of metallic pins. But each bit of contact feels so right; the combination of sound and visuals sync up to give us a small taste of some larger meal we’ll put off until later, until we realize we’ve been snacking for an hour and are no longer full. An exemplary finish results in an exultant rainbow splashed across your screen while “Ode to Joy” signals triumph.

Though it all means close to nothing, we feel overjoyed, ready to forge ahead for that next jolt. That Juul borrowed a food item for his term can be no accident. Games are Juicier than ever. And just like a handful of Cheetos, the most addictive ones melt away before we even know if we’ve won or lost.