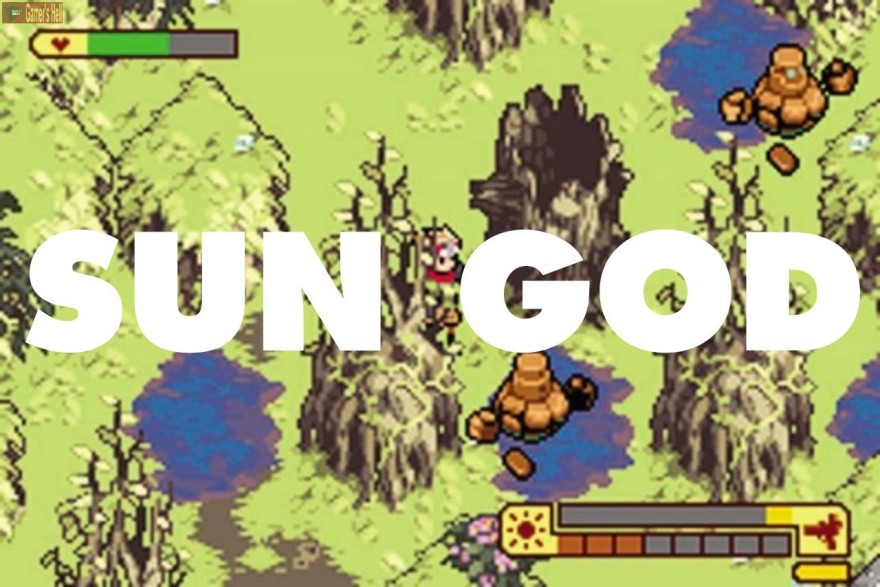 Boktai: The Sun is in Your Hands was a 2003 Game Boy Advance game by Kojima Productions. The game was an anomaly for several reasons: 1) it was an original title on a system rife with remade Super Nintendo games; you viewed the action from a 3/4 overhead view—otherwise known as isometric—that few games attempt (but would be seen again in Supergiant Games’ stellar Bastion); it came from the mind of Hideo Kojima, self-proclaimed rock-star developer and wearer of sunglasses known mostly for the Metal Gear Solid series.

But there was something else. You played the game with Helios, the Sun God, himself. Literally, the sun.

The game’s most notable feature was a small solar sensor on the cartridge itself. In order to defeat your undead enemies, you charged your only weapon, the “Gun del sol,” with actual sunlight hitting the sensor on the back of the cartridge. The benefits of forcing a player outside in order to complete the game are debatable, especially for those GBA owners living north of the Arctic Circle during winter. I’m a sucker for novelty, though, and don’t find it to be a bad word like some: Novel means “new,” after all, and Kojima should be better known for his alternative experiments such as Boktai than as the director of increasingly unintelligible conspiracy plots.

But what sets Boktai truly apart is its prescient take on the future of power consumption. Our reliance on machines for business and pleasure requires an ever-increasing pool of energy. There’s only so many plesiosaur skeletons in the ground, a finite amount of coal, dirty or otherwise. Whomever finds and harnesses a safe source of regenerable power will, as they say, win the game. There’s no better time to consider how to use the sun in productive, responsible ways. Even though Kojima’s sensor has little to do with powering your lawn-mower, it’s the sheer spirit of the idea, the creative use of existing resources, that needs to be mined for as-yet-undiscovered answers to imminent problems.

In fact, games are filled with tiny opportunities for real-world progress; the sum total goes far beyond a high GamerScore or list of digital achievements. Nintendo’s 3DS handheld system includes a built-in pedometer and tracks your steps taken. Walk enough and you build up “play coins” which can be used to purchase in-game items. Instead of paying with cash, you pay with exertion; calories burn, an inexhaustible fuel producing something of worth.

GEOlino, a German science magazine for children, released a board game that produces maybe the best source of ecological change available: awareness. Meltdown is played on a board made from ice; you fill and freeze a number of molds that come with the game. Your task is to advance your polar bear pieces through their habitat before the miniature ice floes melt. Though its message may be oblique and alarmist, playing the game might very well shift that kernel in a young person’s mind that tells them climate change is important, with real and tangible consequences.. At the broadest level possible, these lightbulb moments are what determine who solves the dire questions of our future more than a lightbulb design using ten percent fewer watts.

But where the sun taketh away, it also giveth back. Kojima, with his clever innovation in vampire-slaying technology, is turning out to be quite the soothsayer: Ten years after Boktai‘s release, a company named Ubiquitous Energy is working on solar cell technology that would revolutionize handheld electronics and our capacity to power devices we rely on more each day.

If Ubiquitous Energy can fulfill their lofty goal, they will do for everyone what Kojima did for gamers ten years prior: Place the power of the sun in your hands.

Kate Greene, writing for the MIT Technology Review, imagined a future where the sun was good for more than treating Seasonal Affective Disorder:

Imagine a world where any surface could be coated with solar cells, converting sunlight and even the glow of light bulbs into small amounts of usable energy. This is the goal of a new startup called Ubiquitous Energy. The company hopes to develop affordable, transparent coatings and films that could harvest light energy when applied to windows or the screens of e-readers or tablet devices.

Solar cells and panels have been around for awhile. Early applications were used on spacecraft in the late 1950s to help harness energy during a satellite’s flight out of orbit. Recreational and domestic use began to be more cost-effective into the 80s. Now we see them in places as far afield as Outer Mongolia; they even crop up in urban art d’objets like the Solar Tree in Gleisdorf, Austria, or the SolarWorks of Thomas Lindsey at Stanford.

But a major problem with solar (or photovoltaic) panels stems from a reliance on silicon, a rigid, opaque material. Advances in research have allowed newer photovoltaic systems a greater flexibility, but at a cost. What Ubiquitous Energy is attempting to do is create a thin, transparent solar cell that could be placed over any kind of surface, from the screen of your tablet to a large bay window, and absorb and transmit usable energy to either that device or your business.

The implications for our future selves are innumerable. As more of our work (and pleasure) is performed on the go, on high-consumptive devices, there’s an increasing need for portable energy. The need is so great, and applicable to the mainstream, that a recent ad featured Jay-Z hawking Duracell’s Powermat, a flat sensor for charging multiple devices at once. Our insatiable need for power is at once ripe for satire and a frightening precursor to larger questions down the road. And that desire is only going up. A company that offers an affordable solution, leveraging a resource as available as sunlight, will change the way we work and play.

Boktai grew out of an initial concept by Kojima, though he was only a producer on the final title. The main character is known as Solar Boy; the game consists of stealthily making your through through labrynthine dungeons, defeating a head vampire, and dragging their coffin back into the sunshine’s purifying rays to destroy the undead forever. What do we say when a phone or handheld system loses power? “It died.” If Ubiquitous Energy can fulfill their lofty goal, they will do for everyone what Kojima did for gamers ten years prior: Place the power of the sun in your hands.