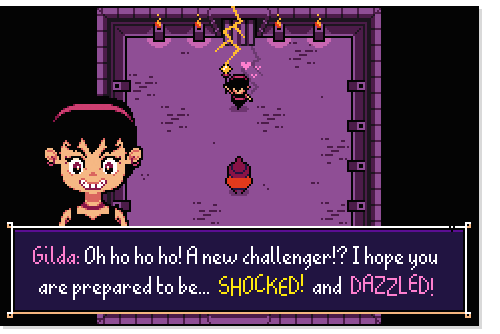 Like any human being who was between the ages of three and 30 when the Harry Potter books were coming out (we’re talking 1997 here), I always wanted to be a wizard. Besides the obvious advantages of being magic, so much of that world was impossible to resist, from Bertie Botts Every Flavor Beans right down to the Quidditch pitch and those terrible screaming bowling balls that broke Harry’s arm that one time. I was entranced, up until my 11th birthday, where an empty mailbox single-handedly destroyed all my faith and childhood wonder (it happens to all of us.) Still, I never really left the desire to run away and learn magic behind.

If you went through a similar experience, upcoming wizard-school-in-development game Ikenfell should be right up your alley. Created by designer Chevy Ray, artist Hunter Russell and sound designers aivi & surasshu (who also work on Steven Universe!), it’s an upcoming Japanese-style RPG with a unique twist on the fantasy setting.

instead of playing the Chosen One, you’re kind of a nobody

Like Harry’s numerous adventures, it takes place within a school for budding magicians. Instead of Hogwarts, the school in question is Ikenfell, and instead of playing the Chosen One, destined to kill Voldemort or bring balance to the Force or whatever, you’re kind of a nobody. Maritte, the player character, doesn’t have magic. She doesn’t go to Ikenfell. But her sister did, and now her sister’s gone, and you have to find her. Cue game.

During your heroic quest to find your sister, you’ll encounter tons of different characters, explore the massive school that we can only hope has stable staircases, and learn magic, which you can use to duel other characters through a turn-based battle system. The Kickstarter trailer shows big, multi-character duels that look to be somewhat tactical, but as Ikenfell is influenced by Paper Mario (2000), Earthbound (1994), and Carry On (2016) as well as Harry Potter, it  aims to be quirky as opposed to classic. Based on the screenshots we’ve seen so far—bright and colorful, like if Filch had had a better life—it’s definitely on its way.

Ikenfell’s already made its Kickstarter goal, but its creators are still aiming for the stretch goal of a full-length soundtrack once they hit 50k. They’re going to release on PC and Mac as well as Linux if all goes well, and you can still pledge until July 23rd. Come on. Didn’t we all want to go to Hogwarts?

Check out and perhaps support Ikenfell over on Kickstarter.