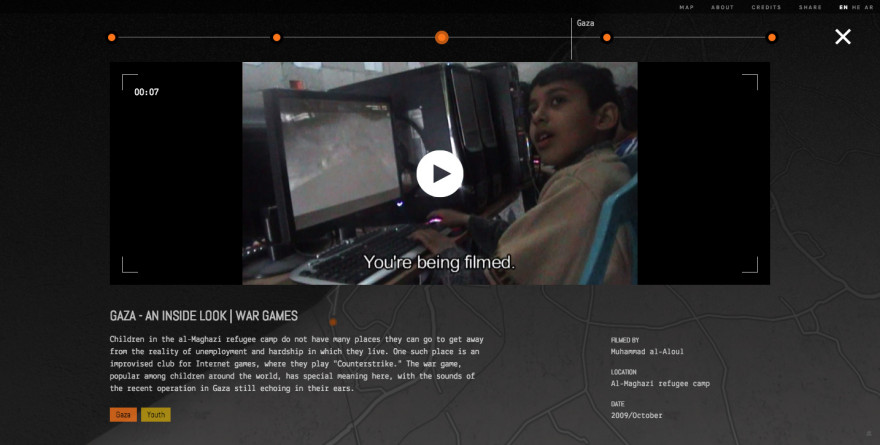 Points of View is a web-documentary capturing the daily lives of Palestinians inside high-conflict areas like Gaza and the West Bank. A 3D map allows viewers to choose between destinations or topic filters containing several 6-10 minute video fragments. All footage is shot by volunteers in collaboration with the B’Tselem Camera Distribution Project. The Israeli human rights information center, who began the project back in 2007, provide all volunteers with not only with cameras, but also basic training in shooting and editing.

In 2009, video artist Zohar Kfir found the massive piles of footage at the B’Tselem headquarters in Jerusalem. After watching them for eight hours straight, she knew they deserved to reach wider audience. “It’s the stories that aren’t getting into the media,” she says. So she set out on a project “to bring the daily testimonies of people in the West Bank and Gaza to the web. Because what we’re used to seeing is only very violent.”

The narrative threads range from a videogame club inside a refugee camp where kids play Counter Strike, to street clashes between Israeli settlers and Palestinian villagers. Though the violence displayed is incomparable to that shown in traditional news media, these smaller acts of conflict carry a piercing kind of intimacy. One video depicts a settler forcibly locking a sixteen-year-old Palestinian girl inside her own home, pressing her face against a cage and repeatedly calling the girl a “sharmuta” (or “whore” in Arabic). Another depicts Israeli soldiers detaining Israeli activists during a Palestinian protest.

“[That violence] is part of the reality, but it also shows the way in which the Palestinians are using the cameras to document and defend themselves,” Kfir explains, regarding the more brutal exchanges. The footage now often serves as a way capture human rights violations that would otherwise have gone unseen. “All the volunteers receive instructions from B’Tselem not to stop the camera if there’s an event of violence. So that there can be a time stamp and it can go to legal proceedings.”

From the moment she first saw the footage back in 2009, Kfir knew “the materials were too sensitive for work that was too artistic” or traditional. “It was obvious that it was not going to be a linear documentary. I didn’t want people to watch a predetermined narrative with one or two conclusions made by the director.”

“It’s a point of view rarely seen in the Israeli public.”

So instead, Kfir envisioned a transmedia project displaying video trails, and able to be updated easily with new angles, events, times, and locations. “I was interested in just seeing how I could fracture the experience and reconstruct it on the map. And just offer all those realities on the map for people to jump to different trails.”

Another important aspect of the site’s design was a “database-driven authoring system that could dynamically expand and allow B’Tselem to post new videos on their own in the future.” The Open Source software will make it easy for footage to be uploaded by volunteers, leading Kfir to imagine that “in 10 years, there could be hundreds of videos.”

“It’s a point of view rarely seen in the Israeli public. That’s for sure,” Kfir concludes, speaking as an Israeli only currently residing in Canada. While she doesn’t believe the videos can change people’s strong opinions on the conflict, she hopes they might generate some discussion, both internationally and locally.”Maybe by watching some of the videos, people can understand the other side a bit more.”