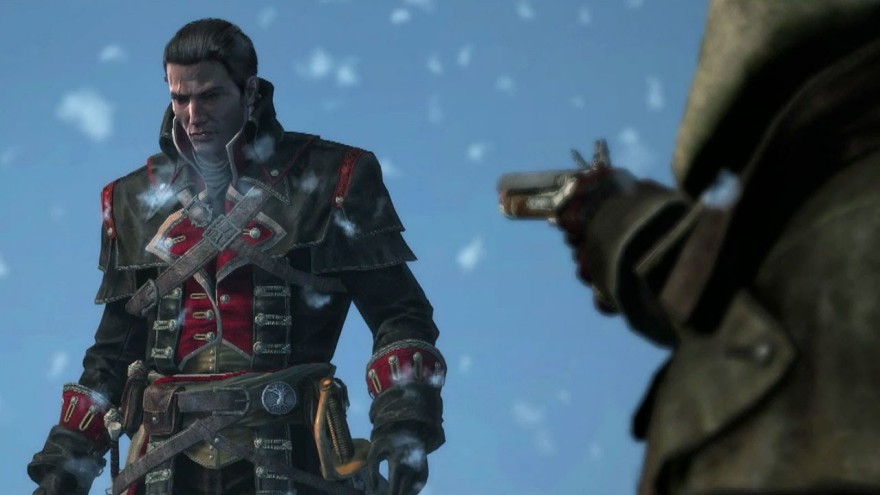 “I believe Shay may be the most important Assassin that has ever lived,” Otso Berg, an Abstergo head honcho, says to me in a voice I can only describe as permanently conspiratorial.

He stands before an enormous white board of pictures featuring the Assassins most relevant to my current mission, excavating the life of Shay Cormac. Otso Berg looks twitchy, too closely resembling the crazed Assassin’s Creed conspiracy theorist often spotted on Ubisoft forums, devising hypothetical plotlines to render the series somewhat coherent. Otso Berg and his pushpin map embody Rogue in this way, as an Abstergo (by which the game means Ubisoft) representative tries to convince me that it all ties together. We are pointed constantly toward a badass Templar mastermind plot, which instead comes across like a schizophrenic attempting to make sense of a convoluted dream.

But whether following Shay’s story in the animus or the meta-narrative frame that casts the player as yet again another nameless Abstergo employee, Rogue at best provides hollow answers about the now-hollowed conceit of an eternal battle waged between Assassins (chaos/freedom) and Templars (order/control). No amount of Otso Berg’s conspiratorial scream-whispering that this Shay guy is important as hell, oh man, you wait—just you wait until you see how absolutely not pointless this story and this Assassin are can convince the bedraggled player that anything worthwhile is happening.

Rogue at best provides hollow answers about the now-hollowed conceit.

As a mutant hybrid prequel of III (in terms of story) and a spiritual successor to Black Flag (in terms of world navigation and combat), Rogue is  as original and congruous as its main character. Meaning: not very. Shay Cormac, lacking any backstory or motivation whatsoever, seems to stitch together all the worst qualities of past protagonists from the series in the hope that it’ll count for enough “personality.” He encapsulates Altair’s petulant rebelliousness, Ezio’s treatment of women as exotic birds, Connor’s rigid yet shoddy sense of morality, and Kenway’s smugness, all rolled into one cardboard Assassin’s Creed Protagonist™, whose face I got to watch melt repeatedly during final assassination sequences (an Animus glitch, presumably).

Arguably, Rogue isn’t about the journey of a single character. The story focuses on the ultimate downfall of the Brotherhood into near extinction by re-introducing players to the North Atlantic Brotherhood during its golden age under the leadership of good ol’ Achilles (Connor’s mentor in III). This demise, though, is brought about by Assassin’s Creed Protagonist™ #6.

At the core of Rogue’s purported appeal is the chance to deepen an understanding of the Assassin-Templar war by placing players on the Templar side of the battlefield for once. In some ways, it feels like Ubisoft’s attempt to return to a time before Black Flag, which flat out abandoned the philosophical and moral underpinnings which once served as the series’ narrative foundation. But what does this time travel do to the past?

Bringing back a few characters and settings from III only serves as a reminder of how far the series as a whole has fallen. Through the lens of Connor’s optimism in III, the empty mansion overlooking the breadth of the American frontier had seemed bursting with potential, as a home base for a future Assassin revolution. I finished III believing the series would continue into the wilderness: an action-adventure videogame with a little bit of principle, providing an entertaining but worthwhile space to interact with two opposing ideologies of power through pseudo-historical exploration.

But glimpsing the homestead again in Rogue, teeming with cookie-cutter Assassins who serve as nothing more than combat tutorials, I realize those hopes were pitifully naive. Like the series itself, a once-proud organization which seemed to stand for something significant—for the necessarily impossible struggle of protecting people’s most basic human rights—has now been reduced to a hodge-podge of mannequins wearing different shades of window dressing.

For all its other flaws, at least III’s narrative managed to successfully transform the Templars from a one-dimensional, indiscriminate evil and into a movement fighting for the same cause, only with a different philosophy than the Assassins. The father-son relationship between Haytham and Connor contextualized both sides of the war and their moral differences in familial undertones: the Old Order, wanting nothing but the safety of their offsprings, seeks control over the rebellious New Order, who wants nothing but freedom.

Conversely, Rogue paints the picture of an arbitrary war drawing arbitrary lines, while barely even referencing any defining theoretical differences between the two parties. The entire episode which fuels Shay’s dramatic shift from dedicated Assassin to local Brotherhood serial killer can essentially be boiled down to a clerical error or poor communication skills (though, admittedly, one with horrifying consequences). When the conflicting philosophies aren’t being flat-out ignored by the game, they’re directly contradicting the lore already established in the series. When Shay leaves his Brotherhood for the Templars, his parting words of wisdom are that “we don’t have the right to decide the future.” A sentiment I assume each Assassin reacted to with a shrug while muttering, “Yup, sounds like exactly the same shit we say all the time.” On the other hand, Shay’s new tyranny-loving Templar friends must simply turn a blind eye to this blasphemous sentiment, on account of him murdering all the people they don’t like and all.

Rogue never addresses any of that, or even comes close to delivering on its promise as a return to when the words “nothing is true, everything is permitted” carried any sort of meaning. I don’t think that’s a problem exclusive to this particular installment. Saturated by the series’ often-convoluted plotlines and allegiances, the narrative foundation of the entire Creed appears to be collapsing under its own ever-expanding weight. Black Flag’s attempt to sidestep the entirety of the Assassin-Templar conflict, along with Rogue’s inability to pick it back up meaningfully, seems like proof. All the times the series has played fast and loose with the creed, using it when convenient to the plot and abandoning it whenever it isn’t, is finally catching up with Ubisoft.

“Shay will lead you to a greater understanding,” Otso Berg keeps insisting throughout the game, even in the after credits cutscene.

I want to believe him. I do. But as Shay Patric Cormac closes out his narrative, an eagle screeches above him, and the only understanding I feel deepened is why Desmond Miles chose death instead of life as overlord of this universe.