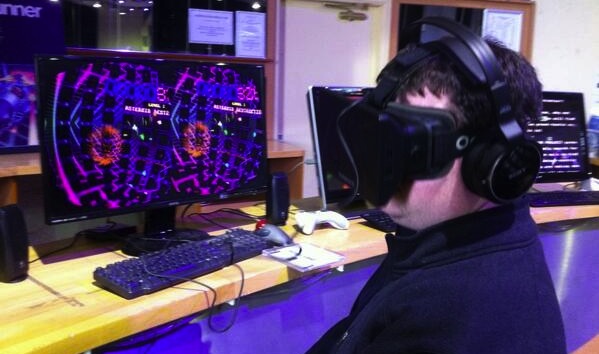 The prospect of Jeff Minter making a game for Oculus Rift is pretty terrifying, especially when said game is Minotaur Rescue, a psychotic swirl of ZX81 graphics and random goat blurts. Personally, I love the game; it remains one of my favorites on iOS, and that’s saying a lot. But I say terrifying because you’d be sticking your head smack in the middle of this whirling, chaotic black hole of a game.

Admittedly, Minter’s description makes it sound amazing: “I postulated that instead of objects moving on a flat screen the user might see objects moving on a sphere that surrounded him, as if he were entirely enclosed within a spherical screen.” I imagine that when I came out from the VR helm my hair would be streaked white.

Right now the game is available as a free demo, and is more of a testing ground for Minter to dick around with a Rift kit. You can find a link through this post on Gamasutra, if you dare.