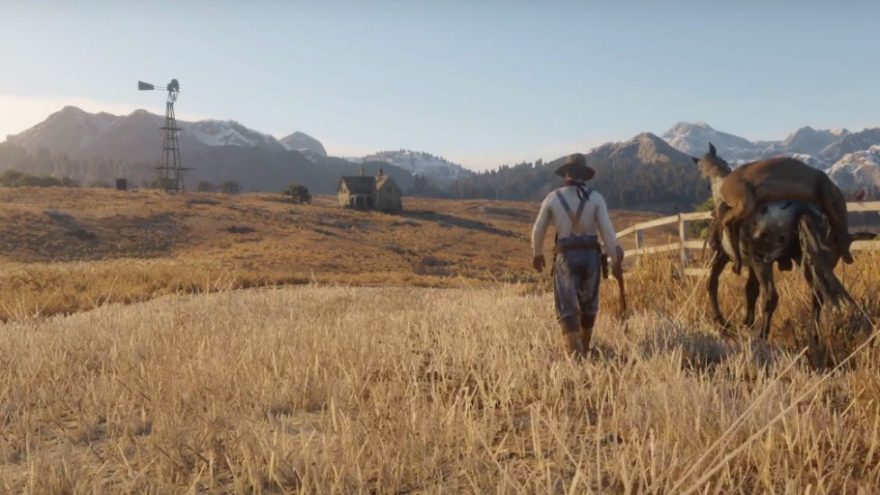 We all sat around in hushed anticipation, our hearts racing for our first glimpse at Rockstar Games’s official foray into the current generation of consoles. We could hardly wait, our noses nearly touching our screens we leaned in so close, as if to not miss a single polygon. And then it started, and for one minute and eight seconds, we got our first look at Red Dead Redemption 2.

Which is all well and good, sure. But did you fucking see all those animals?! Let’s talk about that.

At merely seven seconds we see our first horse, the Cadillac of the prairie, the reason we’re all here. There’s nothing better than saddling up on a trusted steed and taking off across the great American landscape, listening to the almost-rhythmic clop of its four hoofs against the dirt. Or hog-tying unexpected civilians to the back of the horse, dragging them behind, listening to their hypnotic screams for mercy.

At 14 seconds in, we see a deer, and it’s a hell of a specimen. Now, if there’s two things that are undeniably American, it’s Red Dead Redemption and hunting bucks. As a born-and-raised Kentucky native, I’m happy to see such a staple of my country and state being represented in videogames. My hat’s off to the Houser brothers for that one.

Moving on to 17 seconds, we see what appears to be pigs roaming the pen of a farm. But pigs are kinda gross, so I don’t really have an opinion here. Moving on …

At 19 seconds, we see natural selection in motion as a grey fox (or not—this has been subject to major debate) takes down and eviscerates a smaller rodent. Clearly, Rockstar has created a very complicated and nuanced internal food-chain system for Red Dead Redemption 2. So, we can probably expect to see animals going nuts all over each other, killing and eating lesser creatures. Which is kinda cool.

23 seconds in we see some stupid birds struggling to fly against winds. Dumb birds, get your shit figured out. When I was six, I went to the zoo with my parents and a bird pooped on my head. Birds suck.

At 36 seconds in we see a ton of buffalo running alongside and around a train. Call me a monster if you must, but there’s absolutely no way I can stop myself from trying to hit a buffalo with a train. That sounds pretty funny.

At 41 seconds we got some cows. Which would be far more interesting had Rockstar not confirmed at 43 seconds in Red Dead Redemption 2 will have good boys! In a quick glimpse, we see an adorable dog having at it with some vultures. I can’t wait to pet every dog in that game. If there’s not a “pet” button prompt, I’ll demand a full refund. Give the people what they want, Rockstar. I fucking love dogs.


This concludes my round-up of animals in the Red Dead Redemption 2 trailer. I guess the game looks cool, I don’t know. What I do know is the animals look great.

For more Red Dead, read our review. For more of me being dumb, read me speculate about what’s going on in this Red Dead teaser image.