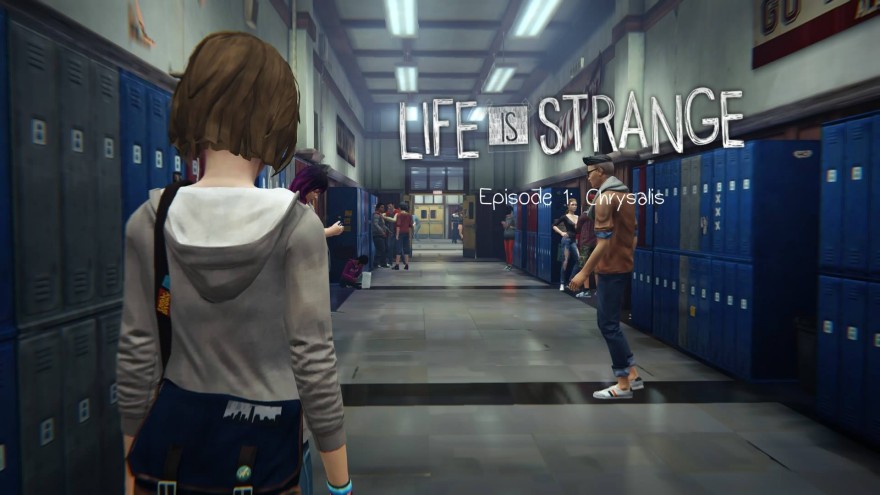 Life Is Strange is a Square Enix-published adventure that revolves around photographs. It’s arrived at a moment where we’re obsessed with photographs too: the President poses for selfies, Wall Street throws money at image-centric startups like Instagram and Snapchat, and parents agonize over teenagers sexting. Life Is Strange is a game about photographs: what they enable us to do, what they drive us to do.

Our avatar is Max Caufield, an 18-year-old student at prestigious Blackwell Academy in Oregon. Max is a promising photographer, which makes her role as a silent observer that gradually morphs into an amateur detective a neat bit of plotting. Max is also a soft-spoken introvert and newly returned to town from a multi-year sojourn to Seattle; she’s the perfect protagonist for a 3D third-person game where you walk her around to gawk at mundane objects to read their flavour text and stop and stare at other characters before you decide how to interact with them.

Life Is Strange has a charm that is hard to resist.

The necessary stiltedness of adventure games aside, French developers Dontnod have done a largely laudable job in creating a naturalistic world for Max to inhabit. The game is brought to life through detailed 3D models processed through a stippled watercolor effect—it’s beautiful to look at and feels drolly like this world of social media-fluent teens is being viewed through an Instagram filter. The veneer cracks a bit once we get to the dialogue: Max and company talk the way 30- and 40-year-olds think that teenagers talk. Our hero tells us that she has “mad respect” for Annie Leibovitz, and the leader of the neighbourhood skate crew laments that Max is a “poseur.” With casual references to quadrotor drones and a 3D printer, Life Is Strange goes far out of its way to root itself in somebody’s idea of contemporary youth culture, though I suspect that it will feel tragically dated by 2017.

The game wastes no time in getting down to business: it opens with Max having a vision of a tempest and then learning she has the power to reverse time, which is the game’s central conceit. It’s a superpower anyone would want, being able to rewind any conversation to deliver the bon mot that occurred to you five minutes later—which is basically how Dontnod tutorializes the mechanic. Just a few minutes later Max is thrust into a dire situation in the girl’s restroom where we use her powers to prevent a fatal shooting.

This is Life Is Strange‘s biggest flaw: it’s decidedly deficient in subtlety. While the dialogue is well-acted and directed, it’s also deeply fond of over-explanation (“They have carbon fibre tripods here! The cam head even has a ball lock? I’m such a photo nerd”), and the episode’s situations pinball from light comedy to attempted murders and allegations of attempted sexual assault. The first episode of a serial needs to build a world and also establish a tone, and Life Is Strange struggles slightly to cope with the latter mission.

The inconsistent tone undersells what might have been a memorably weird game—Life Is Strange is never quite as odd as the title might suggest, despite Chapter 1 being bookended by intriguingly supernatural visions of doom. Once these are dispensed with, the game could easily be mistaken for a Gossip Girl promotional tie-in, given its focus on the mundane dramas of teen life. Max eventually “get[s] all deductive” about a missing girl who was pals with her erstwhile best friend, but most of the chapter’s running time is devoted to confrontations with the Mean Girls-style “in” clique and reminiscing over photos of friends.

But that said, Life Is Strange has a charm that is hard to resist. The dialogue never quite manages to achieve believability, but the game’s top-notch art direction makes Arcadia Bay an interesting pocket universe to explore. The time reversal mechanic is also full of potential and neatly executed through the game’s thoughtful UI.

If there’s one point of consistency running through the entire episode, it’s the significance of capturing images. Budding photographer Max is given the option to take photos throughout the chapter with her hip retro Polaroid, which serve as collectibles and easter eggs. Almost every crucial plot point has a photo as its axis: a prank involving a sext message, controversy over CCTV cameras being installed on Blackwell’s campus. Dontnod have set themselves an appealing stage to engage us with a thought-provoking and contemporary conversation—whether or not they can do so and simultaneously unravel their Twin Peaks-flavoured missing girl story is a picture that I hope the subsequent chapters successfully develop.