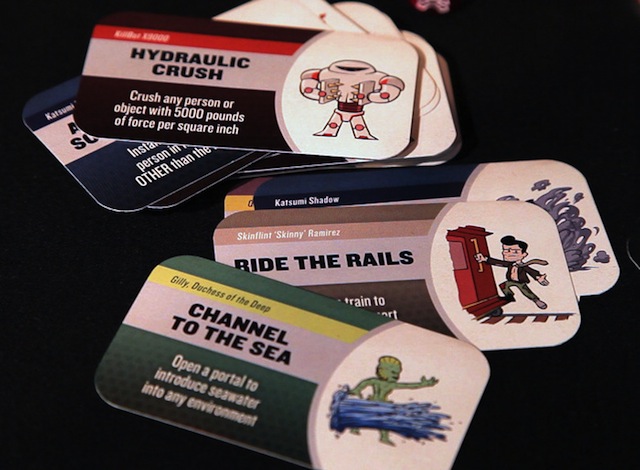 The Machine of Death sounds like quite a hilarious device, despite its morbid name. The core idea behind the card/tabletop “game of creative assassination” offers players the chance to deal death via an insane variety of methods, including bananas, sharks, brain melt, and other fun and exciting elements.

Players take the roles of assassin-strategists, who must kill their targets by the means drawn on a card (many… nontraditional means are included), using only the tools they randomly draw from the deck. But there’s a twist.

“The GAME is about flinging SHARKS from CATAPULTS in order to kill imaginary people. It’s basically a game of Mousetrap or a Road Runner cartoon, except that it’s TOTALLY WITHIN THE RULES to create a QUICKSAND GENERATOR in a TREEHOUSE in order to DROWN A CHILD. (That was a real game we played.)”

Creator David Malki (the creator of Wondermark, and one of the editors of the original Machine of Death short story collection) just started a Kickstarter campaign for the game, which has already made more than four times its original goal (with a full 27 days to go). The campaign is so well-off that it’s now barreling through its stretch goals, including increasingly-fantastic cards, cards commissioned by specific artists, and even a second game box to hold all of the (stretch goal-fueled) expansion content.

This is all well and good, but the core game looks like simple, anarchic fun.

Here’s the deal – I wanted to make a game that lets me do the things I like to do anyway: tell crazy stories with my friends, make up ridiculous and absurd scenarios for us to laugh about, and generally GET CLOSER AND BOND with OTHER HUMAN BEINGS through the HEALING POWER OF LAUGHTER.

Machine of Death seems poised to become the world’s best warmup/wrapup game for board game nights (possibly replacing Cards Against Humanity once and for all). This goes doubly so if you have funny and clever friends (and less so if your group includes people who think they are clever/funny).