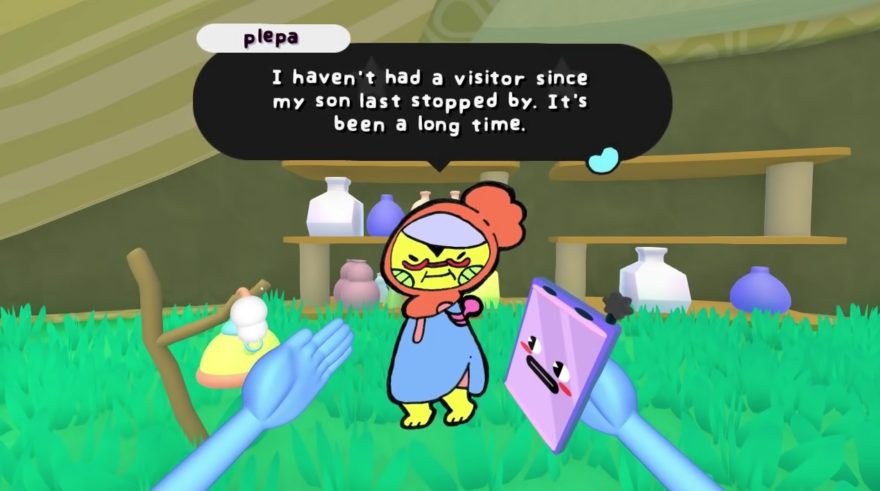 When someone talks about nostalgia in videogames, there’s a solid chance they’ll also be talking about Metroidvanias or slick indie platformers. Super Meat Boy (2010) ends up being notable for its tight air control and precise jumps—the weird setting and throwback cutscenes are kind of a bonus.

But from what I can tell, the upcoming Burrito Galaxy has nostalgia mostly for the weird worlds games let us inhabit. When the vaguely dissonant squeaks of the soundtrack from the new video started to play, I couldn’t help but grin: it sounds like someone made the Wii Shop Channel soundtrack play a game of Dizzy Bat. As the charming old lady twists left and right, her speech is communicated through the cheeriest gargling noises you can imagine. She lives in a tree that is also her husband, named Trunko.

From the wobbly text effects to the big goofy slap the protagonist (named Guac) dishes out when they want to talk to another character, Burrito Galaxy looks a lot like something that would have appeared on the GameCube, capturing a weird charm I remember from Nintendo games of my youth not because it parrots them, but because its cuteness has its own brand of imaginative weirdness to it. It’s charming and nearly inscrutable all at the same time.

This video gives a little bit of insight into something that looks like a quest—the player is tasked with finding Plepa and Trunko’s son, perhaps up to no good or in danger caused by the “strange happenings” in the forest. Either way, Guac gets a couple USB drives with a map and a letter, which do seem like the traditional trappings of adventure games or side quests. Either way, I’m still not clear on what the game’s going to be when someday it pops into the world fully formed—in their own post on Reddit, one of the creators called it a “first person platformer/adventure/ski/story…?”—but I am looking forward to being able to find out at some point.

You can find out more about Burrito Galaxy on its website and also sign up for its newsletter over there too (which it totally worth it).