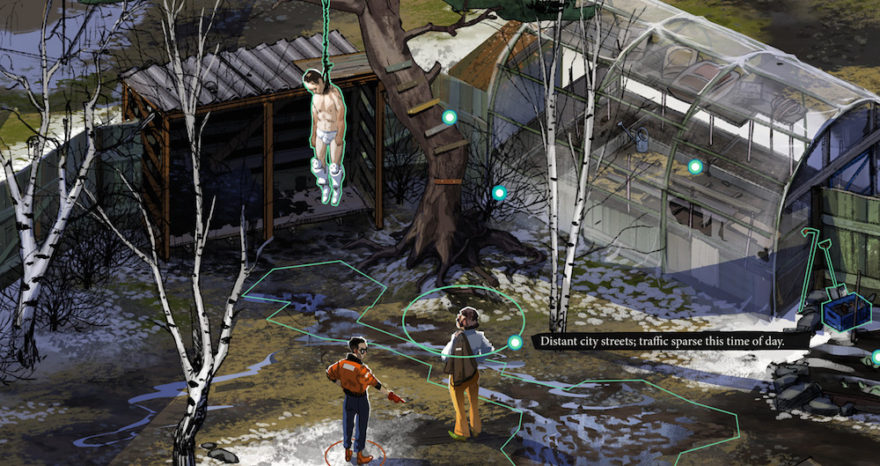 No Truce With The Furies, in addition to being an oil painting come to life, is a game with a very high standard for writing. Developer Fortress Occident boasts a published science-fiction author in its writing team, and the game cites as inspirations text-heavy Infinity Engine games like Planescape: Torment (1999) and the original Fallout (1997). The detail an isometric perspective allows means the studio is able to go significantly more in depth than other games, but the conventions of the medium—long paragraphs of dialogue, often clicking through multiple choices with one character, and passages of narrative removed from gameplay—can be something of a hindrance.

In earlier blog posts, Fortress Occident detailed how the traditional writing approach to most of these games felt wrong for No Truce. Their writers’ literary background meant that limiting the main character’s thoughts to just dialogue and narration was unnecessarily restrictive, and ended up taking away from the writing that they really wanted to do. Bloated dialog between the player character and NPCs was unattractive and tedious, so they got creative in order to combat this. Eventually, they ended up inventing what they call “sense orbs.”

Sense orbs are in-game popups that hover around the player character’s head and represent one-off reactions to their environment. If you walk into a bathroom, an orb might appear that remarks on the bad smell. A room with windows may trigger an orb about the cars on the road that you can hear outside, or the persistence of the chilly breeze, or even a speculation about the room’s importance to your current case. That way the player can engage with the environment in a way more akin to real life—or a novel, which is allowed the elaboration of descriptive text—while simultaneously encouraging familiarity with the player character.

Building on this goal, Fortress Occident recently posted a blog post about a similar system it has implemented called “afterthoughts.” It’s an attempt to recreate the feeling you get after finishing an argument, or even a particularly spirited conversation, and thinking “man, I should have said [blank].” That’s called l’esprit d’escalier—“spirit of the staircase” in French, or “staircase wit”—and No Truce uses a similar orb tactic to replicate it. Assuming you have a high enough Rhetoric skill, an orb will pop up with a better or more clever comeback, and you can ignore it or roll your eyes at will. You can even turn around and try your luck on the previous conversationalist, though they might not be impressed by your belated reply.

Writer Robert Kurvitz explains that this is all in pursuit of leaner dialogue. While they want to keep things interesting and provide enough material for all character builds to have special opportunities, they also don’t want it to become a chore. He said that “[a]fterthoughts are a way for us to keep dialogues leaner while adding more content for different builds.” No Truce With The Furies isn’t going to be overly long, but afterthoughts and sense orbs want to ensure that there’ll be enough to experience for all play styles once the game is finally out.

Read the full blog post on the No Truce With The Furies devlog.