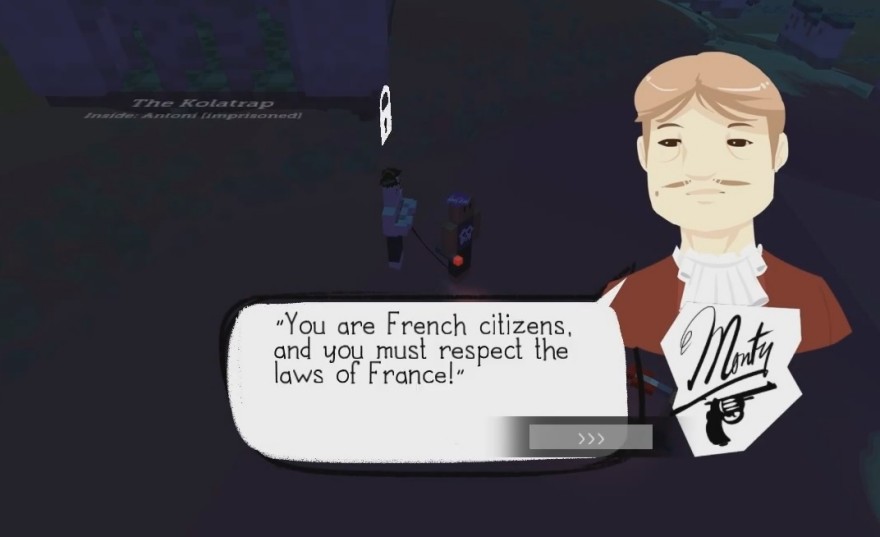 In the closing scenes of Claude Lelouch’s 1995 retelling of Victor Hugo’s Les Misérables, André Ziman stands in a courtroom defending a modern-day Jean Valjean. The year is 1945. Ziman has just been reunited with his family, which had been separated while fleeing the persecution of the Nazis and their French collaborators. He opens his comments to the court by citing the American author Willa Cather: “There are only two or three human stories, and they go on repeating themselves as fiercely as if they had never happened before.”

While this passage applies to war and revolution in general, Ziman is speaking in a specifically French context: as he speaks, France is a few months away from the formation of its fourth republic since the 1792 abolition of the monarchy. History repeats itself over and over again, with the same ferocious brutality. If anything, it grows more fierce as it goes unheeded.

Paradise Never, a forthcoming RPG from Devolver Digital and Kitty Lambda Games, can be seen as an extension of this history. Set on an island colony of France in the year 2027, Paradise Never is a story of a failed revolution. But, in Paradise Never, there are only two or three human stories, and they go on repeating themselves as fiercely as if they had never happened before. The death of the revolution is but the story’s beginning. A goddess gives you and your band of revolutionaries a second chance. You can relive the three days of the revolution again. And again when you fail. And again when you fail once more. Maybe you’ll eventually get it right.

This is Edge of Tomorrow…with a more complicated map

The island is rendered in soothing reds and blues every time the world regenerates but its layout is always changing. This is Edge of Tomorrow–or, as its now known: Live. Die. Repeat.–with a more complicated map. It also has more interaction as characters can engage in conversations, and objects can be interacted with. Paradise Never promises a circular maze but not at the expense of life within its confines.

The underlying question in Paradise Never, as raised by Cather, voiced by Ziman, and touched on by Edge of Tomorrow, is whether this repetition is a curse. As a revolution dies, one can hope for another chance. But then you have to live it again, and again, and again. At some point, the work of living and fighting becomes a Sisyphean task. Would this change you? Would you give up? Would you do something differently? This is a human question. In its historical context, this is also a French question. Perhaps Paradise Never will finally provide an answer to these dilemmas.