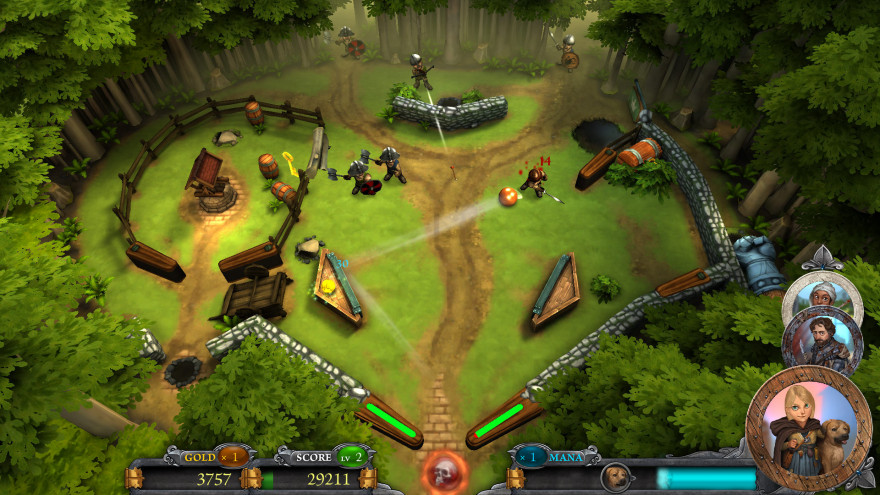 Title:
Rollers of the Realm

Rollers of the Realm gleefully engenders the classic pinball dichotomy: you’re either doing really well, or really poorly. The context is this: I am some weird benevolent flipper deity, and my RPG characters are my pinballs. It’s as silly as it is sounds: every time a pinball drains, that character is dead, but my flippers can also take damage, from enemy archers or wizards, their arrows and fireballs (burning pinballs that I can hit back, naturally) draining their green, creamy centers into the red of the classic HP bar, while their outsides splinter and fracture, shrink down into nubs.

This is only one of the weird systems that intertwine into something that probably shouldn’t work, but does. As a pair of flippers, or some celestial pinball wiz, I can’t die, but my party can. They, on the other hand, have individual powers associated with them that manifest in various ways: the knight is a heavy pinball who does more damage to enemies who walk around the playing field (I will never know if they are mutants in a world of sentient pinballs or vice versa), while the rogue is a lighter weight and does more damage from behind (i.e., when a pinball drops on a target). A ranger shoots arrows at nearby enemies he whizzes past, while an alchemist does the same but with bombs. Meanwhile, bumpers and targets give me not points, but mana, gold, and experience.

If it sounds convoluted, it’s because it kind of is.

If it sounds convoluted, it’s because it kind of is, but somehow, it manages to directly and accurately convey the convoluted systems present in its source-genres and make it all enjoyable. The game’s roster is a huge cache of classic RPG characters, and their lack of differences isn’t so much a fault of Rollers as it is, say, Dungeons and Dragons.  When it comes down to it, a swordsman, a monk, and a knight are all things that use different things to hit enemies: reduced to pinball form, the differences are even smaller, even though they can boast different weight classes and feel. Let’s be honest, though: they’re still pinballs, and I’m still going to use them to hit things. If the knight ball is a trundling solid metal, the magic-casting crone is something lighter, whizzes easily across the playing surface.

But this is also source-faithful. Take, for example, The Twilight Zone’s gumball, a super-light white ball that rockets across the playing field in antithesis of its heavier brothers. When the ranger calls his animal companions, extra balls ferret out and it’s just like Medieval Madness’ multi-ball madness, crashing up against castle walls in an effort to stop fantasy bad guys. It would take much more time than either of us have to explain all of the powers, but suffice it to say they all serve to help your party on its quest, which moves through the predictable but varied locales of a Dungeons and Dragons campaign: towns, castles, graveyards, caves, and parent’s kitchen tables.

The game is at its peak when it throws you and your party into huge, massive tables where you’re fighting giants roaming a battlefield, and you have to carefully manage each ball’s mana costs against reviving other fallen pinballs. Somehow, it all feels epic: several minutes pass and I’m still carefully switching to my knight to break down barriers, swapping in my healer to build up my flippers, and then swinging my rogue into a catapult to knock down a gargantuan beast. It’s a very accurate representation of the feeling that forms on a real table when you’re closing in on a personal best, and the extra balls are racking up; and somehow, it’s also the same feeling you get in a difficult battle in, say, Dragon Age, carefully positioning your party members and managing spells, attacks, and orders.

Rollers of the Realm just wants to turn you into a pinball wizard.

But outside of these larger areas, Rollers lacks a certain kind of pinball mainstay: stability and static growth. Plugging a quarter into Medieval Madness or Attack from Mars is offering a tribute to an inert field, as you learn the ins and outs of a table and slowly begin to not suck on your way to mastery. It’s necessary dedication because pinball can be so harsh: hitting the wrong spot can drain your ball before you can employ your entire being to shake the table and stop it. You have to learn these spots, and avoid them; likewise, you have to learn the angles and entwine your being with a sole object.

Rollers instead turns that growth into character items; the balls grow across a variety of fields which are maddeningly dissimilar not because of their obstacles, but because of their angle and scope. A massive, nearly top-down level can be followed by a claustrophobic vault with the camera angle tilted much farther back, and without warning, suddenly balls are falling faster because of the perspective shift. One of the great joys of a pinball table is conquering its challenges in a consecutive fashion, but even on Rollers’ massive battlefields, the game is instead content to ferry you to a different area after finishing one or two tasks, when really, it should bask longer in the places its created, vie more for the epic and less for the brief errand. These can be: stealing money with the rogue from unsuspecting villagers who are essentially pinball targets, sneaking into a castle without alerting the guards (or alerting the guards and fighting your way through), or lighting all torches: things that would be great all on the same, sprawling field played out in progression, but stick out when left alone in small locations, quickly forgotten with the transition to the next level. 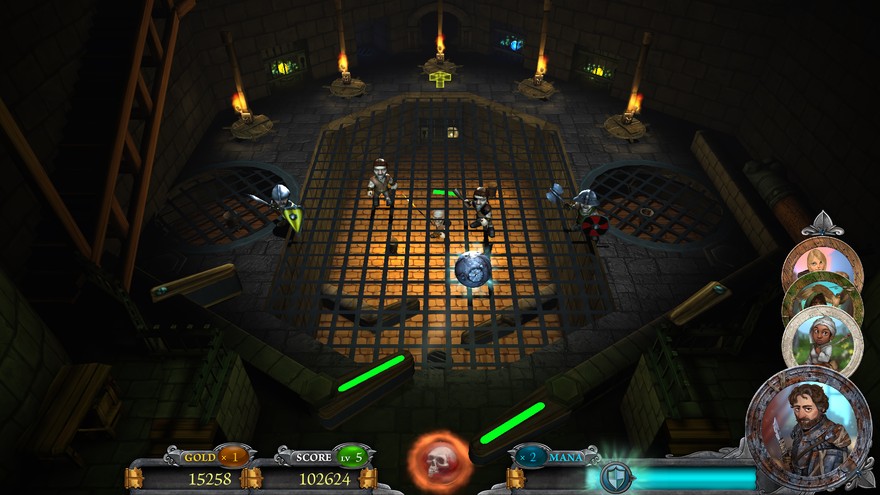 Fortunately, Rollers of the Realm shares enough in other joys. It’s clear it likes pinball as much as it likes role-playing games, because the whole game is one big love letter to both, the things mashed together into some odd blender without reason or deeper purpose. It doesn’t really need any; what’s here is a kind of pure, childlike delight, one that makes it okay to grind gold to buy daggers for my pinball-shaped rogue forever. Nothing about it makes sense, but who cares? Rollers of the Realm just wants to turn you into a pinball wizard.