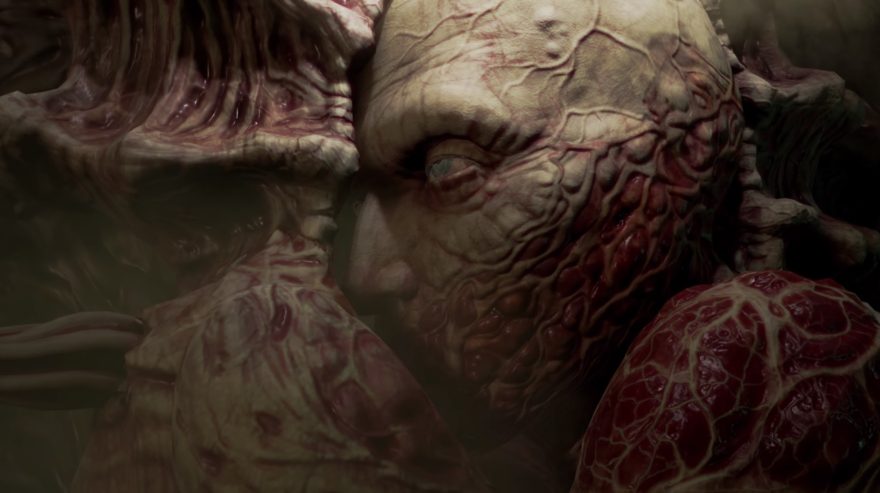 The camera slides over an unknown melding of flesh and bone, something tumorous growing in the edgelight. Towers of meat and sinew stand in a sickly fog, their scale and anatomy twisted beyond recognition. Like the 1979 teaser for Alien, the camera lingers over these textures, as if under such close scrutiny some occult meaning might be revealed.

This is the teaser for Scorn, and it sets out a strong vision of fleshy worlds and cadaverous landscapes. Like that infamous Alien trailer, it is a masterpiece of atmosphere, a slow accumulation of tension that creeps under your skin. However, unlike that Alien trailer, which builds to a frantic flashcut montage of violence and fear, Scorn‘s simply grips our nerves ever tighter, refusing to release us with a jump scare or gunshot. Stare, it says, at the world we have wrought, and be afraid.


Ljubomir Peklar of developer Ebb Software admits the purposeful slowness of the trailer comes from “watching too much Tarkovsky.” For him, this unnerving crawl reflects the game’s own pace, “slowly pulling you into the world.” And what a world it is. Built from the decaying remains of H. R Giger’s signature biomechanical shapes and Zdzisław Beksiński’s dreamlike constructions of calcified bone, it feels like the fullest commitment to the visual design of those two master surrealists we have ever seen.

But Scorn goes beyond that, drawing its inspiration not just from the visual signature of these artists, but the meanings encased in their works as well: “The style was not chosen just because it looks cool but because it correlates with the ideas of the game,” Peklar said. In particular, Scorn endeavors to step into that dream-space that these great artists conjured, not one of disembodied, floating wanderings, but fleshy materiality.

Peklar is insistent that the dreamlike nature of Scorn is not “something completely outside of our reality” or “purely metaphysical.” It is instead an attempt to engage with the very meat and bone of our mortal bodies. The “dream-like nature of the world is there to compress, heighten and exaggerate the materialistic aspects of the world,” said Peklar, suggesting that Scorn will be a visceral, immediate experience, not a space for wandering introspection.

Beneath the skin of each of us lies a monster

Yet there is something in the trailer’s slowness that cracks open its imagery, pushing it beyond gory shock tactics and towards a more poetic tone. As Peklar mentioned, Russian director Andrei Tarkovsky is an influence, and while his imagery might never have strayed into the hellish fleshscapes of Scorn, the richness of his cinematography can be felt here. Take his opening to Solaris (1972) for example, his lingering shots drawing out the powerful strangeness in the movement of the weeds under the stream. The same unflinching focus is later applied to the boiling surface of the planet Solaris, its waters as much a part of an impregnable natural system as that of our own world.

Scorn, in its anatomical focus, seems to turn the same focus to our own bodies. Beneath the skin of each of us lies a monster as terrifying as the figure we see stalking a corridor in the trailer’s latter parts. Our bodies, within their hallowed chambers, offer sights to match the bulbous and queasy constructions that Scorn’s world is built from. As it does in the only gameplay in the trailer, where a quivering, mutilated creature is fixed in the sights of a cartilaginous gun, the game seems to be asking us to simply look, and not turn away. What could be more terrifying than that?

You can find out more about Scorn on its website. It’s slated to arrive on PC in 2017.