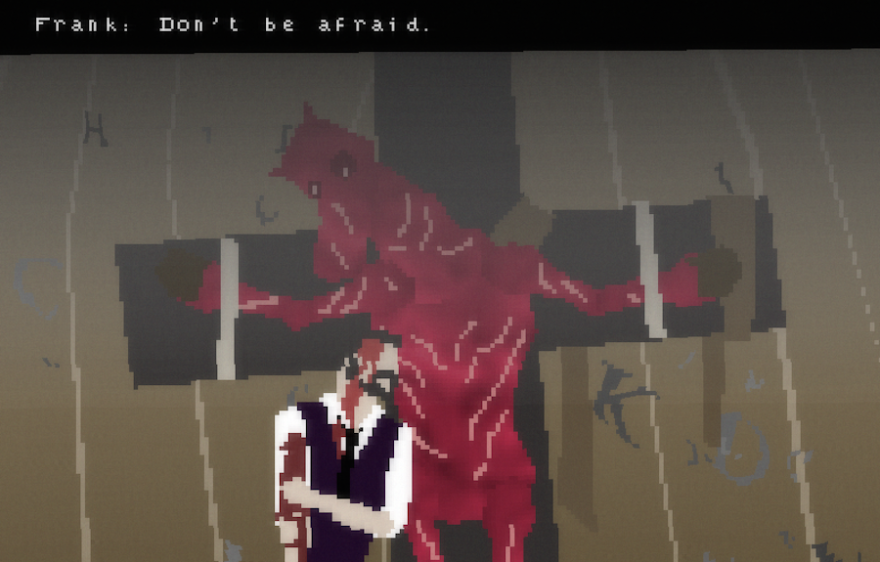 Frank wakes up covered in blood and I may never sleep again. Game developer Daniil Ermakov, also known as Da Neel, combines the horrors of cult surrealist directors David Lynch and Alejandro Jodorowsky and produces a mish-mash of terror and humor in the face of human trauma. A Box Full of Joy is a surreal adventure story where you play as Frank and, through the poetic justice of the story and plot, you learn absolutely nothing.

It perfectly emulates works like Jodorowsky’s fantasy The Holy Mountain and Lynch’s psychological thriller Lost Highway. While a lot of games evoke these director’s works, A Box Full of Joy completely takes out the more linear aspects of Lynch-inspired games like Alan Wake and Deadly Premonition and replaces them with sheer terror and gore.

It also has a little in common with Groundhog Day, following a repetitive path between waking up outside of a bar, and travelling between it and a dance hall. Frank, the protagonist, has five modes of action: He can moonwalk in either direction, he can examine and interact with people and objects, he can pop pills, and he can slowly walk towards a destination.

the more the game mentions fear, the scarier it gets

Ermakov changes up the pace by taking away certain actions and adding in different settings, increasing the unease possibly experienced by the player. At one point, Frank, who also answers to Stan, even enters his familial home, complete with wife and kid. The game’s nods to its influences can be startlingly direct: each “sequence” ends with a Lynchian close-up, zooming in on Frank until you can see each individual pixel; the music feels like it was taken straight out of one of Jodorowksy’s soundtracks; the background of the living room in Frank’s home looks like it was taken out of The Holy Mountain, complete with the 1970s style swirls, bright colours and blood splatters.

And, to be sure, it’s completely terrifying. At one point, Frank wakes up as a pair of legs attached to a bloody cross, reminiscent of Jodorowsky’s acid western El Topo; the “Pure Beast,” a skinless horse-like creature you can choose to slay or set free, bears a striking resemblance to the crucified lambs of The Holy Mountain. Golden-haired love interest Her’s scream evokes Sarah Palmer’s scream from Twin Peaks, and the Distinguished Gentleman speaks about his beer glass the way the Log Lady might speak about her log. Just as the works of both directors bang around in the viewer’s mind for days or weeks afterward, A Box Full of Joy has multiple endings, encouraging the player to revisit the horror again and again.

You can play and download A Box Full of Joy for free on Game Jolt.