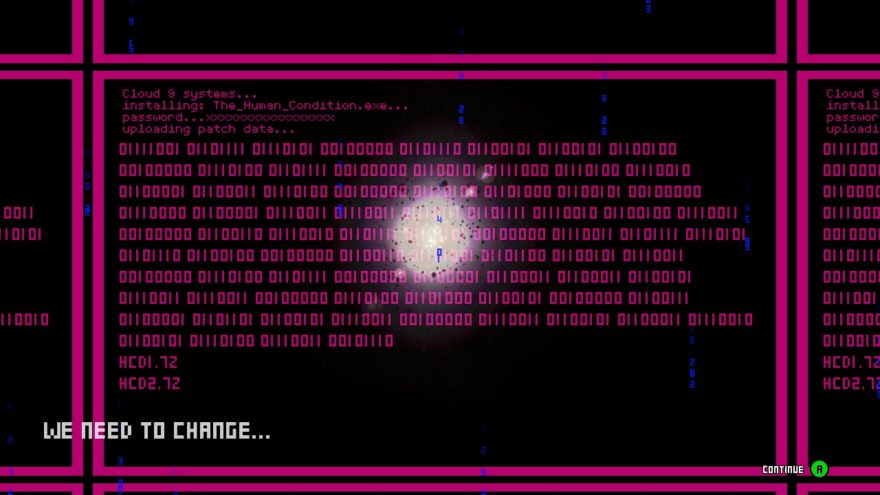 The popularity of hacking fantasies today has more in common with a legend like Robin Hood than what might be immediately apparent. In both cases, one of society’s underdogs has found a way to cheat the systems upheld by authorities and turn them on their head—either through stealing money or hacking into computers. The technology and techniques have changed over the years but not the underlying desire. It’s only one strand of evidence that suggests cheating is an integral part of the human condition. This is something that Damien, the disabled dad and husband behind Sheffield-based game studio Ninja in A Tux, knows very well.

“Since birth my left hand had no fingers, just four tiny nodules of skin for fingers and a thumb stump with a little bone but no movement,” Damien told me. His right hand was fully developed when he was born but is now held together with pins due to an accident. Luckily, he still has full use of his right hand, but his left hand remains very limited as to what it can do. That’s not to say it’s completely useless. “This stumpy half left thumb however allows me to press one key at a time on a keyboard or control the left analogue stick, and has been my gateway into gaming since I started,” he said.

For the most part, Damien is able to use standard game controllers to play games, but he does use macros to modify computer mice and voice commands to assist him. These are a few of the ‘cheats’ he has had to develop over the years in order to play videogames. “Growing up in the 80s and 90s there wasn’t anything like Special Effect to help disabled kids play games, so I had to adapt or just avoid playing certain games but it never stops me trying,” Damien told me. He’s applied that same determination to other passions of his too, including graphic design, art and web development, and music production.


It was the 2005 PC racing game GTR that led him down the path of making his own games. Damien started making mods for GTR and spent the next six years dedicating some of his time towards this pursuit. What put a stop to it wasn’t a disinterest but rather the opposite—he wanted to make his own games. He started out with GameMaker, later expanding his toolset to include other game engines such as RenPy and Unity3D, at which time the hobby had become a more serious part of his life. It wasn’t long until it steered his path in a new direction. “I left my job in IT for a major bank, partly because you needed a lack [of] morals to work there, partly because it was depressing, and partly because I wanted to follow my passion for games,” Damien said. “I went back to university to study computer science and design.” This didn’t last long, however, as Damien quit in the second year of the course due to family life and the responsibilities that come with it taking over.

But he didn’t stop making videogames as he found it to be the “perfect escapism” and a productive way to spend his time. What really drove him was being able to set a number of challenging goals related to becoming better and more advanced at game development, and then chasing them down. “When I was making music I wanted to release my own MP3s, then vinyl, then an album,” he said. “It’s kind of the same with games, my first game was a simple platformer and my current game: Drones, The Human Condition is a complex layer cake of secrets and methods to hide those secrets.”

Drones, The Human Condition is a twin-stick shooter primarily about surveillance and set in a futuristic Orwellian dystopia. But it’s also much more than that even if it isn’t obvious at first blush. Damien has taken his understanding of the human instinct, which encourages us to cheat when we are met with limitations, and created a hidden narrative for those who act on their curiosity. “I like to think that everything within a game is there for a reason, adding detail or setting the scene or adding to the story without narrative,” Damien said. “The secrets add another dimension to the game which some people may not ever see but I also knew that at some point somebody would delve into parts of the game they shouldn’t, people use programs to cheat or remove DRM or whatever.”

Damien’s assumptions of player behavior here seem to have been backed up before Drones has even been released on Steam: someone has already pirated it. It’s an appropriate thing to have happened to a game that is meant to be hacked into to find hidden messages, passwords, and a whole separate part of its narrative. Having hidden content like this is becoming a more common aspect of videogames these days, with the likes of Fez and the revelations and secrets of its black monolith, and the satanic imagery hidden inside the soundtrack to this year’s Doom. But Damien has perhaps made the most relevant use of this kind of digital mystery making as it feeds directly into the theme’s of his game. Drones, The Human Condition is not only about surveillance, but also corruption, modern-day slavery, Earth’s depleting resources, and the general public’s lack of awareness on all these topics.

You can purchase Drones, The Human Condition on itch.io and Steam. Find more of Ninja in A Tux’s games on its website.