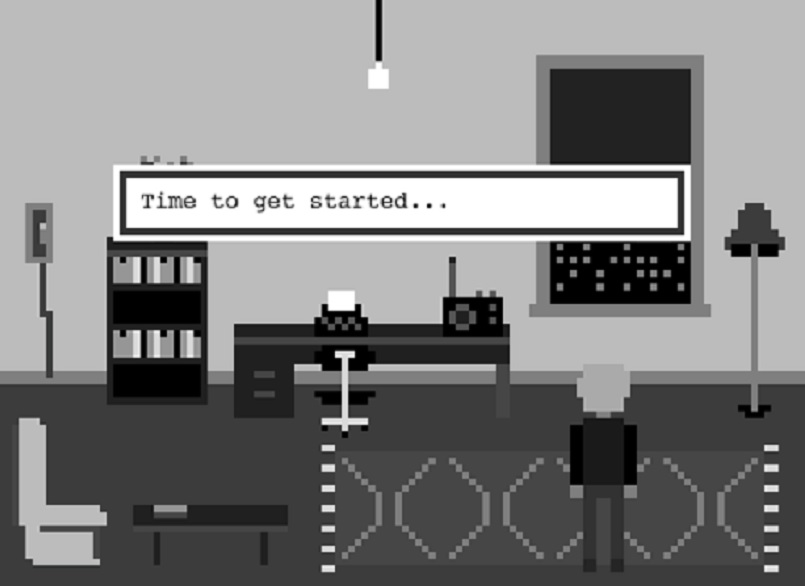 The puzzle island of The Witness, released back in January, contains a theater in which you can unlock and watch movie clips. Among the documentaries and interviews about science progression and spiritual awakening is the last 10 minutes of Andrei Tarkovsky’s Nostalghia (1983). Since it’s been discovered, chatter has spread across the internet from people first discovering the Russian film-maker, not just hoping to discuss what the Nostalghia clip could mean in the context of The Witness, but also showing an appreciation for the artistry of the film’s ending too. In this case, the game has acted as conduit, introducing its players to broader ideas and art works than itself, and which it was probably informed by—a rare moment of videogames breaking out of their widespread insularity.

Pippin Barr, however, wasn’t so inspired by the Tarkovsky clip in The Witness as he was another moment in the game that reaches out to a different medium. While the majority of The Witness is silent—that is, without music, there are plenty of sounds in its environments—it does actually have two songs hidden away inside it. If you toil the hours away to get to the end of the game there’s a secret area you can find where the game’s hardest challenge resides. Here, upon pulling the lever to start the series of puzzles, the time you have left to complete the challenge (for it is timed) is broadcast to you by playing two movements from Edvard Grieg’s “Peer Gynt” (“Anitra’s Dance” and “In the Hall of the Mountain King,” as Barr handily points out); once the music stops, your time is up.

“Unlike most encounters with game music, here the drama of the music is intimately connected to what you’re doing in the sense that it represents the time you have left to solve puzzles,” Barr writes about this challenge. “Combine that with the drama of the second piece in particular, and you have this kind of magical integration of play and music that I find to be quite rare.” What Barr sees here in The Witness is a successful effort to take a pre-existing piece of art and to integrate it “intimately” with the action of the game. The effect of this is that the player builds a connection with this piece of music that they probably wouldn’t have anywhere else, or at least not on their own accord. By simply playing the game they have become familiar with a piece of art outside of it, having emotions and memories tied to it, which should help garner an appreciation for that piece of music outside of its use in the game.

Exploring the potential of this idea is what Barr’s latest game is all about. It’s called Eveline and is primarily about the act of writing. Upon starting it up, I deliberately kept myself unaware of what it was all about or what it set out to do, and found myself struck with the familiarity of its scenario. You play as a writer hoping to have a story published but first must write the story up on your typewriter. There’s an immediate tension between this objective and becoming distracted by the various sights of the writing room. You can stare out the window at a silhouetted cityscape, turn the radio on for musical accompaniment, or read The Metamorphosis (1915) by Kafka.

As I’m sure most writers will tell you, the hardest part of the activity is sticking with it; waiting for inspiration or waiting to be in the mood, or more commonly for me, avoiding the distractions of the 10,000 tabs flashing with notifications in my browser. The first moments of Eveline are rife with this tempting procrastination, but then you exhaust all the items in the room of their curiosity and sit the writer at their desk to get busy typing. Eveline shows no mercy in its simulation of writing. Sure, you don’t actually have to think of anything to write (arguably the hardest part), but you endure the labor of it all: sitting restlessly, tapping away, forcing yourself to focus on getting these words out of your brain and on to the page. The dullness of the white page and complete lack of reason to escape it (i.e. a distraction) is exhausting. It’s why the option to have the writer lie down on the rug in the room resonates with me—staring at black-on-white for so long does something to you after so many hours, and I’ve found the best way to snap out of that trance is to lie down on the carpet for a while.

There are certainly some writer ‘truths’ in Eveline. The biggest of those comes with its, I guess, twist ending. Once you’ve finished typing up the story you’re told to phone a publisher for them to look at it. Three weeks later they send a rejection despite praising the prose. Yep, it turns out you wrote up James Joyce’s 1904 short story Eveline, hence the title of the game. There are two clear points to be made here. The first is that, yes, a lot of writing and indeed art takes, or is sometimes stolen wholesale, from previous works. T.S. Elliot’s famous quotation goes: “good writers borrow, great writers steal.” This seems to be especially true these days in the age of what some people call “remix culture.” The second point is that Barr makes you sit there and play your keyboard like a machine gun, typing up every letter of Joyce’s Eveline, and as you do this it’s almost a given that you’re reading along with it. “You create and consume it at the same time,” he reasons. “Perhaps it’s one way around the ways in which videogames often seem so stunted in terms of the kinds of themes and effects of currently existing ‘great’ works in other media. Just steal them…”

You can play Eveline for yourself in your browser.