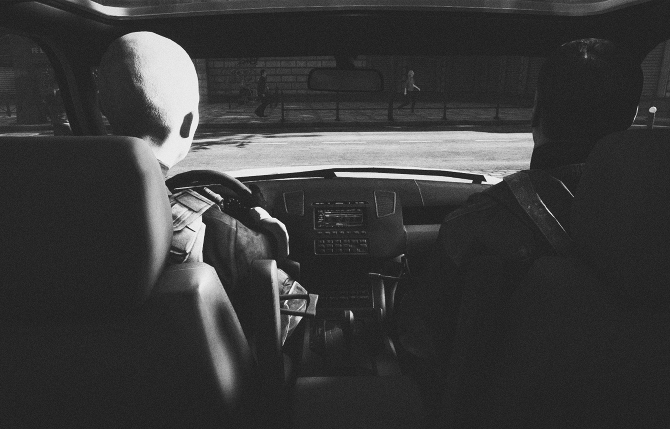 The racing game genre is all throttle and smoke. Good for the thrill of the arcade galleria but less so for anything more reflective. There’s no time for being pensive when there’s a hot rod on your tail and a countdown clock in your front view—that’s probably why the crowds of spectators in these games are given such little attention.

But that’s where Brazilian visual artist and photographer Leonardo Sang drifts in. If his series of artistic screenshots titled “backseats in videogames” is anything to go by, the key to finding the racing game genre’s more serene side is in freezing the action and brushing it with a black-and-white filter. Although, Sang speaks less prodigiously about his technique, explaining his discovery as simply being one of personal preference: “I think road trips should be in black&white.”

Road trips? Yes, while these screenshots are sourced from the fastest circuits and A-to-B rushes of the most lustrous revved up racers, particularly Project C.A.R.S. and WCR 3, Sang captures them using the language of the road trip. According to Sang, sitting us in the backseat brings focus less on the personnel of the vehicle, and more on enjoying the view ahead. In this, he finds the “lonesome roadtrip mood, where the journey inside the car is more emotional rather than arriving at the destination.”

And so we see speed dials and dashboard logos beaming back at us in the foreground. But more eye-catching, despite being in soft focus, is the view through the windscreen: forest tracks doused in each season’s weather, at least one cut through a city, but most common is a light-drenched horizon that suggests the car as a chariot, ascending a road towards a heavenly realm.

This series of screenshots is actually part of a larger project by Sang that he calls “Virtual Reality Photography.” His intent is to show that real-world photographic techniques can be applied just the same inside videogames. When composing these shots, Sang considers alignment, lines, and geometry as he would otherwise, but more towards an effort to be minimal and moody instead of sharing shots that are “impressive” or “stunning.” Still, sometimes it’s pure curiosity that leads to the most inspired of his shots.

You can see “backseats in videogames” on its webpage. Sang’s other screenshot series can be found here.