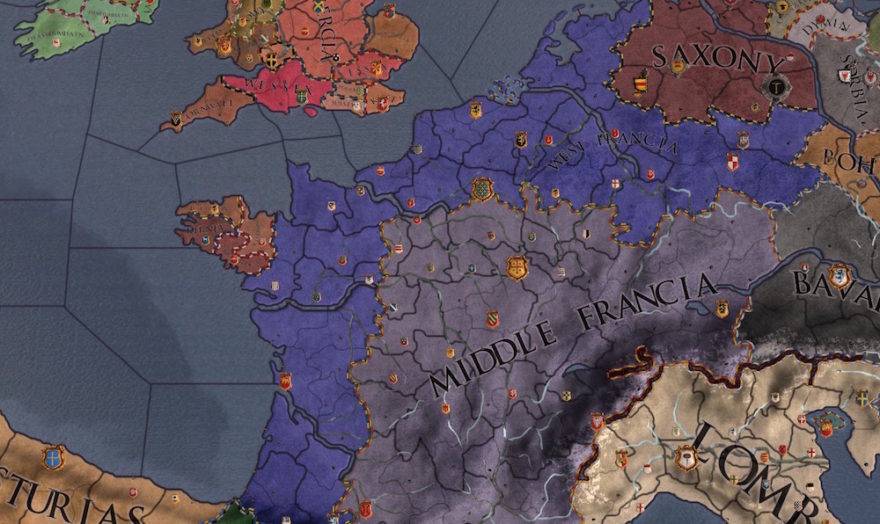 Like the procedural culture experiments currently going on in Ultima Ratio Regum, a recent mod for the grand strategy game Crusader Kings II (2012) is trying its hand at procedurally generating a whole world. The mod, created by user Yemmlie, manufactures history “from its first exodus from Africa” onward, creating religion, language, legal systems, and more, all from scratch. Nothing from the base game remains except for the map, which can be randomized if desired, while new factions and cultures struggle for control of land and resources.

Even though the simulation isn’t as detailed as the vanilla game, the CK2 Generator still boasts an impressive amount of complexity for an algorithm. Entire dynasties are developed, with births, deaths, and family trees all accounted for by the procedural generation. Conflicts of inheritance can be simulated; wars can take place between kingdoms; land can be conquered and settled and re-conquered. It generates an entire world and population to an extent that many hand-made fictional worlds never reach.

Unfortunately, this ambition seems to take its toll on the actual Crusader Kings engine: the subreddit is full of would-be modders who’ve had to endure crash after crash while trying to get the thing to load. Right now it seems to be something to try at your own risk while modders isolate what’s causing the bugs. If and when it becomes stable, though, the mod should lend itself to hug and rich generated histories at the push of a button (well, almost).

If you want to try your luck at generating a whole new world, the mod’s subreddit has a guide to get you started.