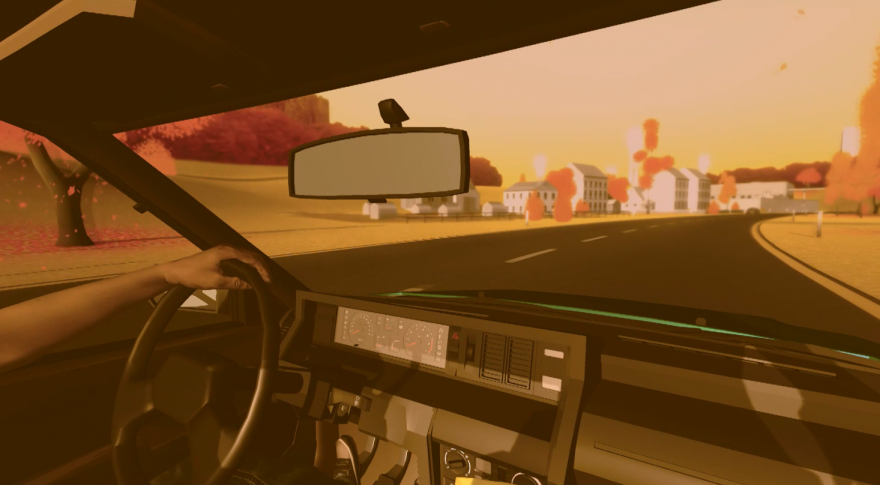 Whenever you set on a trip across the United States, or any country in fact, more often than not you’ll encounter a person or two standing at the side of the highway, waving for you to stop and give them a ride. Perhaps you hesitate since you don’t know who they are: what’s their background and what have they done in their lives? But what happens if even they don’t know who they are and want your help in answering that question.

This is the starting point of Patrick Rau’s latest game. He’s the founder of kunst-stoff, and the creator of several award-winning games, and was joined by a team including author Dan Mayer for this latest effort. The game is simply titled Hitchhiker, and it puts you in the shoes of a hitchhiker who has to unravel the mystery of who they are and where they’re headed. If that concept doesn’t draw you in then it may help to know that the game’s art style is inspired by Firewatch and Gone Home (2013). It’s said to be set in a “dreamworld of hitchhiking and storytelling.”

Hitchhiker will have you take several rides in order for you get to know who you are and discover your personal background. Whenever the driver talks to you, you’ll be prompted with multiple lines of dialogue for your reply, with each choice directly impacting the course of the game and changing “your path across the highway world.”


In addition to that, you can interact with the environment around you, “turning on the radio, rolling down the window, looking into the glovebox.” Having VR support means that the simple act of looking around and soaking in the environments is encouraged too. In a brief discussion with Rau, he revealed some minor details about the game’s characters, saying that the players will slowly realize that the drivers don’t actually exist in the true sense of the word, with only one other character who really exists, and he’s “a second, mysterious hitchhiker, who appears as a kind of enemy / antagonist to the main character.”

In all these descriptions, it may seem that Hitchhiker is, in some way, aping the reverie state of Glitchhikers (2014). In fact, it seems to have a more clear storyline than that game, which focused more on musing on the state of the universe and discussing the surreal experience of night driving. The question that clears up the confusion is: “What goes on in the subconscious mind when you lose somebody you love?” You should be able to see where Hitchhiker will go from there.

Find out more about Hitchhiker on its website. A Kickstarter campaign should launch early next year, with a full release scheduled for later in 2017. It will be available for PC and have VR headset support.