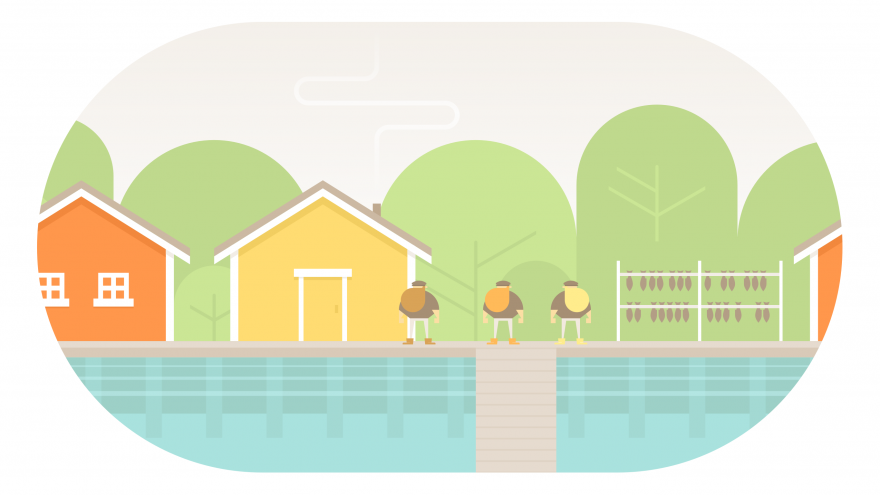 This tale begins with a message in a bottle and its discovery by the Brothers Beard. The message reveals a map, a seemingly ordinary one of the area’s surroundings. Curious, the brothers set sail to a nearby village to ask about the map’s purpose. When they meet an old man who seems to know about it, he grins and leaves them with a puzzling message: “… it’s a worthwhile adventure that begins with the unknown. This map has tales yet to tell.”

This is the prelude to Burly Men at Sea, an adventure game made by Brooke and David Condolora, the married couple behind the studio Brain&Brain. In development since 2014, the game previously caught our attention due to its minimalist and adorable visuals topped with an intriguingly curious title. Finally released last week, Burly Men at Sea shows off Brain&Brain’s illustrative style of storytelling with influences ranging from Scandinavian folklore, Saul Bass’s Henri’s Walk to Paris (1962), and Star Trek (1966), among others.

The game itself is not so much about how you control these characters but rather the experience of seeing their adventures unfold. “This is a game about a group of people. But since it’s also a folktale, we’re trying to keep some distance between the player and the Brothers Beard,” explained David. “You don’t control the Brothers … while they do react to you and move, you’re never controlling a specific character …”


Limited by the choices you can make, you won’t be choosing what the brothers say or how they are portrayed. Unlike other adventure games featuring dialogue trees (allowing you to choose responses), the game sees characters going through scripted conversations revealing their personalities and moving the story along. “[This keeps] you from getting tired of clicking through options and prevent[s] you from reading the same dialogue more than once,” said David. “Conversations contain not only spoken dialogue, but description. This is intentional … [we want] a story-telling feel … you’re not playing as them, but you are telling their story.”

This storytelling feel weaves itself throughout the game to the extent that it feels like you’re reading and watching an illustrated story book. While there are limitations, when you do get to push and prod its world—by steering which adventures the brothers will inevitably face—Burly Men at Sea transforms into an experience where you’re also stepping inside the book itself. The delight comes from choosing where to go and then seeing how these stories play out.

Another way Burly Men at Sea differs from other adventure games is its “draggable vignette mechanic,” where you click and drag rather than point and click. It takes a little getting used to, but once you know how it all works, Burly Men at Sea grabs you in unexpected ways. What starts out as an ordinary day cascades into one adventure after another: be it with the brothers being swallowed by a humongous whale to a water race against the grim reaper with only barrels keeping the brothers afloat. With these encounters building on top of each other and gradually unraveling the world’s mysteries, the otherwise ordinary day becomes more and more extraordinary.

Described as a “quiet adventure,” the game is quiet only in the sense that it’s not dictated by a frenzied pace. You can take your time marveling at the surroundings, float along the sea, and be surprised by whatever awaits beyond the bend. As its core, the game is a celebration of adventuring, of facing the unknown, and of three ordinary burly men crafting a folktale of their own adventures. As explained by Brooke, Burly Men at Sea “explores the idea of adventure, not as some unattainable journey for hero types, but as the sort of experience anyone has by trying something out of the ordinary.”

Burly Men at Sea is available on Windows, Mac, iOS, and Android. For more information visit its website.