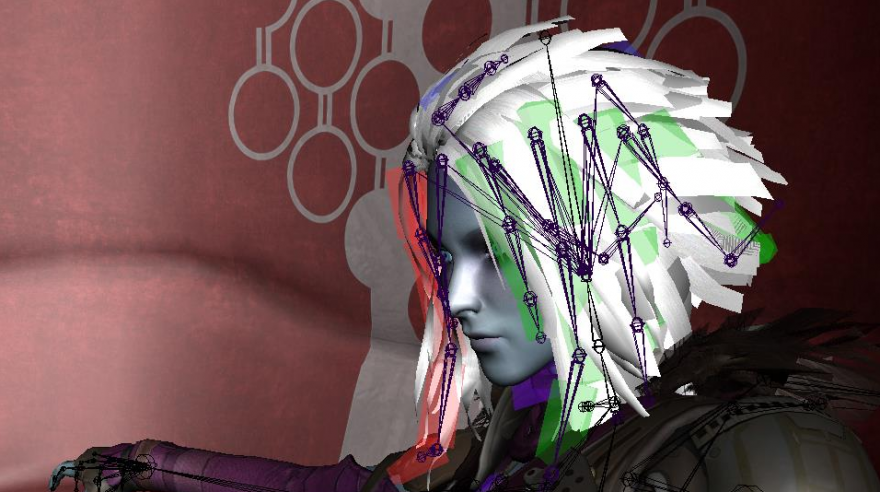 Destiny was a beautiful game. I do not use the term lightly. In every tiny little way possible, the game was maximized for audio-visual spectacle. One of its most sumptuous details, though, was its attention on hair—which is not visible in the campaign, or in multiplayer, or on the pause screen, but exclusively at the Tower, the city-like hub that players sprint through, cashing in bounties and gearing up in the game’s endless grind.

But, hold on—let’s not talk about the grind, let’s talk about the hair, which is emblematic of all the things Destiny did right. They’re ostentatious, wonderful hair designs, in a kaleidoscope of post-Katy Perry hues.

And now here’s a glimpse behind the curtain at the hairdresser at work: a 61-page document called “Hair in Destiny“ by Bungie’s character technical artist Natalie Burke.

It starts off with the eternal question:

Then we see the differences between generations of hair. At first it just seems like slightly more sheen, I guess:

But when the document gets more granular, we see that it’s not just shininess that makes that hair look better, platform to platform.

Then it gets into a bunch of stuff about vertex movements, which is obviously not super exciting, but at some point in that span there’s this slide, which makes it all worthwhile:

Then there’s this slide, which I don’t understand but I just enjoy the general attitude of:

And finally this tantalizing hint at the future of Destiny hair design:

Shine on, you crazy diamonds at Bungie, shine on.