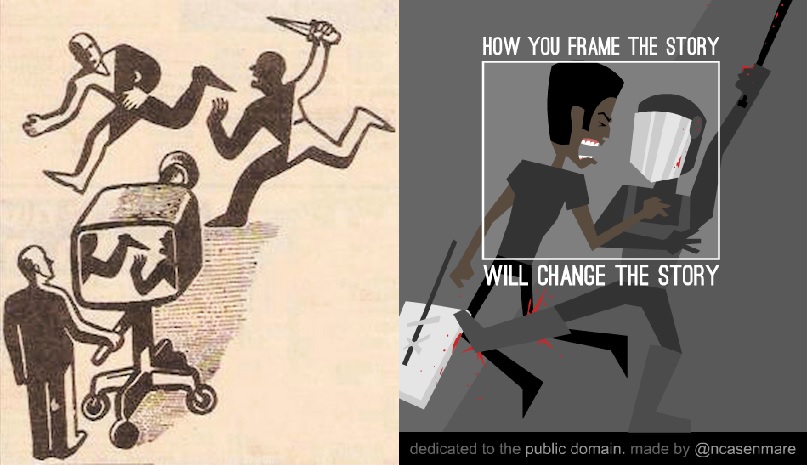 Q: How do you make a videogame about ?

Two weeks ago, a white police officer shot and killed an unarmed black teenager named Mike Brown in Ferguson, Missouri. What’s happened since then has played out loudly on the small town’s streets and echoed across national and social media.

Like millions of others, game creator and animator Nicky Case watched the events in unravel over Twitter as citizen journalists sent out pictures, Vines, and by-the-second tweets. But Case was dismayed to find that Facebook’s algorithms seemed to be hiding any news related to , while Reddit users took to mocking journalists and protestors. Perhaps worst of all, mainstream news organizations—websites, papers, and televised reports—were trying hard to demonize the victim, Mike Brown, as a petty thief and drug addict who deserved those lethal bullets.

It brought Case to a realization: “ showed the world the best and worst in journalism.” It ended up inspiring him to create what he knows: games.

After a few days of taking in the events at Ferguson, Case’s creative spirit latched on to his thoughts and turned them into a succinct cartoon. He was inspired by an illustration he had seen that shows how the framing of a television camera can radically alter the story it depicts. (Both Case’s image and its inspiration are the header for this piece.) Case’s subsequent drawing was a context-specific update of the same idea, featuring a black citizen being beaten by a riot cop, but an inner frame makes it seem that the cop is the victim of the attack. After tweeting the image himself, Case saw his drawing shared by others, amounting to over 3,000 retweets in just a few hours. His image sat among many others on Twitter that had become popular for their perspicuous message regarding the “ narrative” and the issues it brought to the fore.

What is unique about Case’s image, however, and what isn’t largely known, is that it’s actually derived from the videogame he’s making, which is based on the same premise. He doesn’t have a title for it yet, but he’s already set on a subtitle: “How you frame the story, will change the story.”

Case didn’t always mean to create this particular videogame; it more or less fell into his lap. It started off with envy towards Lucas Pope’s Papers, Please—a game filled with ethical dilemmas, yet one with an accessible central conceit that informed the narrative through play. When the news surrounding the devastation of the Gaza Strip escalated about a month ago, that’s when it hit Case: journalism. He could make a game about framing a narrative in a literal sense, with a camera’s frame, and the consequences that can have, as well as tell the human stories on both sides of the conflict, and . This might be his own Papers, Please. It was to be called “Gaza Strip Selfies, and a quick sketch of an Arab / Israeli couple that would have been in the game made it so.

Creating a game based on such a heated topic required research and real stories as close to the source as he could get. So Case got to work, as a researcher, journalist, and game developer all at once.

“I happened to have a couple friends who had lived in and , and one friend who volunteers for the UNRWA. (They’re all safe and sound, fortunately). So I interviewed them, focusing on the human side of the story, while I did the more factual research elsewhere through books, articles, and documentaries,” Case told me.

“For three days, I was an amateur journalist. And goddamn it is tough. I had bitten off way more than I could chew. It’s complex, it’s messy, and it’s a very tragic and sensitive topic I don’t think I’m skilled enough to handle respectfully.”

With that, Case decided to drop “Gaza Strip Selfies” altogether, despite loving the idea and wanting so badly to “show peace” within a conflict where it was hardly visible. Also having delved into the practice of journalism himself very briefly he was further enthused with the potential of exploring its ethics inside a game. “So I still loved the idea of a game about journalism, but had no topic to centre it around,” Case said. “Then happened.”

Videogames have a problem. There’s a stigma attached to them that usually prevents them from getting anywhere near current affairs or real tragedies, as somehow an inappropriate medium for such explorations. So while Case’s cartoon was praised and spread around on Twitter for its appropriation of events in Ferguson, adding animation and systems to it in order to create a videogame adds the “too soon” factor. It’d be understood by many, and possibly reported at large, as an opportunist capitalization of a hot topic, either that or as cheap entertainment that lacks any sensitivity. It wouldn’t stand a chance.

“a lot of modern-day military shooters, feed into the ‘macho bullshit’ mindset”

To be fair, many videogames are highly problematic in how they deal with serious issues. War games indulge in disaster tourism and often make thrilling the murder of an “other” with a different skin tone. But it goes beyond this, too. We know that shooters and the companies behind them are involved in funding arms manufacturers. One of the latest, Battlefield Hardline, has been questioned widely for its unabashed glorification of police militarization, especially now that Ferguson showed how scary that can be. Case is all-too-aware of the effects that these games have and how he must stay clear of their superficial approaches to these sensitive topics.

“Battlefield, and actually a lot of modern-day military shooters, feed into the ‘macho bullshit’ mindset that is getting our men and boys into crime, into prison, and into their graves,” Case says. “Beyond that, it also paints war as fun, and thus, desirable. Which is not an attitude we want once players of CoD or Battlefield turn voting age—wait, actually, they already have.”

Case has had to take time while designing his game to consider, at length, the message that it conveys, then. He doesn’t feel like he could, nor would he want to, make a game about or Mike Brown (although, ostensibly, it will be). If he did, it would likely fall victim to the very subject it is about; how journalism can easily frame subjects to be negative or positive. “If anything,” he says, “my game will take place in 2016, with a fictional case of Yet Another black teenager getting killed by a white cop making national headlines. Given current trends, this will probably still be relevant by then.”

His plan is to tell human stories, first and foremost, and not turn people into resources. He also aims to be respectful and have the game be well-researched. Case also says that, while there will be playfulness and humor, he plans on pulling off a Kurt Vonnegut and “use this levity as a brief reprise to underscore the seriousness of the whole shindig.”

It’s all in the works right now, of course, but Case explained that a typical scenario in the game would involve you moving around a scene where cops and citizens are actively at odds with each other; say, a protest on the streets. Your job as a citizen journalist is to frame the story, and how you do that will affect how the people at that location, as well as the game’s representation of our online world, will react to you.

“Take cop-friendly photos, and the cops could be more friendly towards you, and let you have access to areas you wouldn’t have otherwise,” Case said. “Or take extremist photos, and you will personally turn a peaceful protest into an all-out violent conflict.”

The main mechanic, according to Case, is taking “interesting photos.” If you do, your character will gain Twitter followers, which is the game’s scoring mechanic. “It’s silly and playful, but I think that helps underscore/contrast how fucked up things are,” Case tells me. He’s also looking to add a sense of “dread and decision” through these photographic choices you make by making you aware of how different parties will react to the stories you create. As you’d expect, there are always going to be those that are against you and others that cheer you on, but you’ll have to weigh up the benefits of pleasing one group against pissing off another. Perhaps you’ll feign support for the cops at first, just so you can get access to a restricted area that lets you frame them in a more negative light than you were able to before, and that ends up crippling the justifications they give for their actions.

“we need to take care that sousveillance does not kill privacy too.”

Case’s upcoming game is about a lot more than corruption, militarization, and justice. It encompasses many of the problems with our modern lives, reaching out so far that it even bumps against topics Case is touching on in his larger game, Nothing To Hide. Bringing this up with Case has him happen across the similarities and contrasts between his two games, as if he just realized how his own mind works.

“In Nothing To Hide, I show a world ruined by surveillance. With this journalist game, I show a world with sousveillance, meaning a world where it’s the citizens who have all the cameras. And while I think sousveillance is a great way for keeping people in power in check, keeping them accountable, we need to take care that sousveillance does not kill privacy too. It could create a mob justice mentality. Where anything you say or do can be used against you,” Case says.

Nicky Case has a lot to prove. He’s working against the stigma attached to videogames as entertainment. His “side project” is also an attempt to offer a counterpoint to such blockbuster games as Watch_Dogs and Battlefield Hardline that, as he puts it, glance across criticism of the surveillance state, turn people into player points, and constantly glorify the violence that police and soldiers partake in.

These are all the pre-existing frameworks that he has to work around by drawing and designing with care and thought, so that his own frames carry his messages and dilemmas to the people who play with them. But his chosen subtitle for the game is a constant reminder of how his effort to address the issues that Ferguson raised could be twisted by others: “How you frame the story, will change the story.”