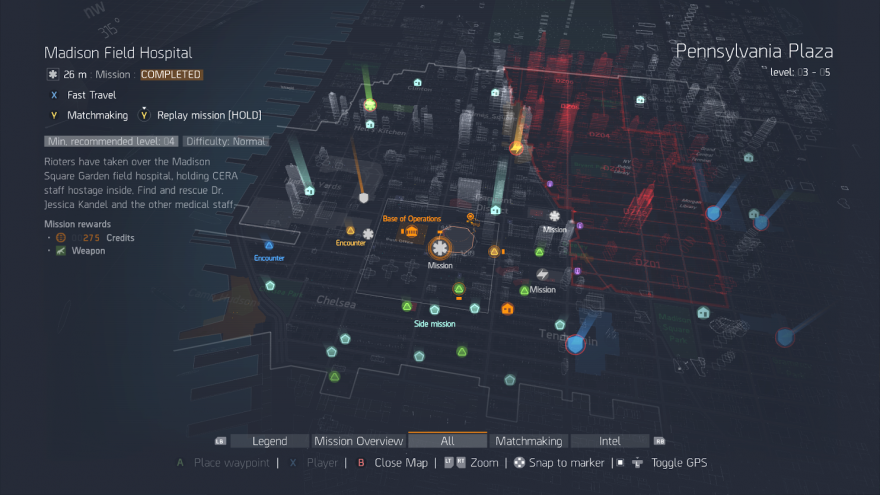 There’s a stillness to The Division’s plague-stricken version of New York. Rats populate the streets in greater numbers than do human beings, and a rustling newspaper is often the only visible object in motion beyond the player character and the omnipresent snowfall.

The view outside of Madison Square Gardens is one example of how Ubisoft Massive has repurposed Midtown Manhattan to suit its game’s persistent, near-future crisis state. Fences are lined with razorwire. The digital billboard out front loops between two images: an American flag and the seal of the Catastrophic Emergency Response Agency, the game’s fictionalized version of FEMA. A tarp has been thrown over the sign at the front entrance of the building, rechristening it the Madison Field Hospital. “Remain calm,” a marquee urges. “Stay off the streets. Help is coming.”

Players might be forgiven for finding much of Midtown unrecognizable within the always-online game world. But Reddit user Feanauro has done their best to bridge The Division’s version of the city with that of the real world by mapping the game’s mission and safe-house locations onto a Manhattan variant in Google Maps.

Despite “some inconsistencies” and “visual anomalies,” which, Feanauro notes, are due to artistic license on Ubisoft’s part, the augmented-reality exercise largely succeeds. A player hoping to take a Division-inspired stroll through Midtown can now do so with relative ease; using the custom map, she might follow the very same path laid out by the game’s campaign, beginning at “Camp Hudson” along the real-life Chelsea Pier. This would probably best be accomplished with the help of a taxi, or an Uber driver, but then the very dedicated Division Agent in question would miss out one of the defining quirks of the experience—Agents can’t use vehicles. In fact, vehicles are not even a part of the game. Helicopter rides take place during cut scenes, while the campaign itself takes place entirely on foot.

the line between games and reality will continue to blur

Feanauro says he may add further points of interest to the map, such as “weapon parts, tools, fabric, [and] electronics,” but admits that he has little intention of adding items like boss-fight encounters and side missions. In the few days since his Reddit post went live, however, he has already made note of several significant additions to the Google Maps variant, so it remains to be seen just how far his efforts at reproducing the world of The Division might go.

I’m reminded of Cory Doctorow’s 2008 novel Little Brother, in which the book’s characters spend their time playing a massively multiplayer augmented-reality game (ARG) called Harajuku Fun Madness. “Imagine the best afternoon you’ve ever spent prowling the streets of a city,” Doctorow writes, “checking out all the weird people, funny handbills, street maniacs, and funky shops. Now add a scavenger hunt to that.” With titles like Nintendo’s Pokémon Go on the horizon, it seems the line between games and reality will continue to blur in the novel and exciting ways that Doctorow wrote about.

See Feanauro’s Google Maps variant of Manhattan based on The Division right here.