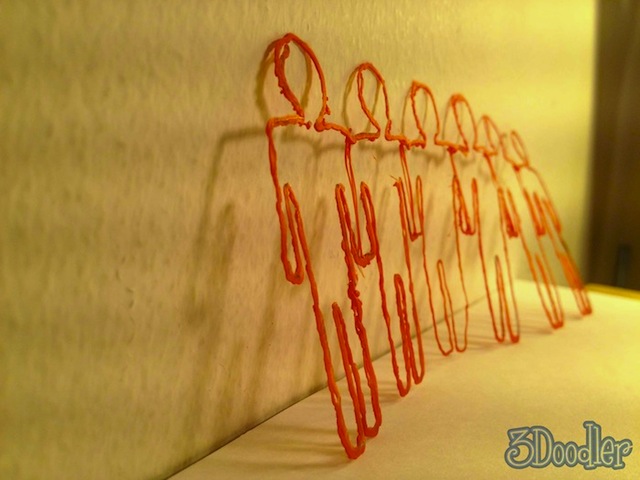 In all the hoopla that surrounded Sony’s PlayStation 4 conference, the creators of Little Big Planet showed off a newfangled tech demo that lets players sculpt statues, which vaguely look like the Venus of Willendorf. Judging from what was shown, you take a Move motion-controller and dutifully sketch into thin air. Your “sculpture,” which is actually just a piece of digital art, appears on the television. You can rotate it.

Enter the 3D Doddler, a pen that lets you draw in actual 3D space, invented by two guys from Boston. Drawing something in 3D is hard to phantom if you’ve never seen it before, so just watch the video:

Pretty crazy, right? For me, that instantly made Media Molecule’s sculpting demo obsolete. Why sculpt in 3D on your PS4 when you can draw in 3D on your coffee table? Somewhere in between a primitive 3D printer and a glorified soldering iron, this wondrous utensil gets up to 270C and works by melting strands of ABS plastic. The sketches have a hand-drawn quality like a cartoon you’d find in the New Yorker. It can be used to draw to-scale models of landmarks or tacky doodles of your dog or cat.

The Kickstarter was funded for over a million dollars in no time flat. I get the feeling there are going to be a heck of a lot of 3D drawings of people’s cats.