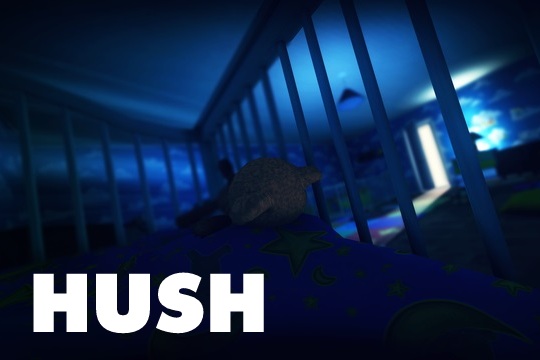 Among the Sleep, which was launched on Kickstarter last week, is a survival horror game that places you in the vantage of an infant searching for mom in a pitch-dark gothic house. It starts out in a crib—A crib!—which is unnerving in itself. You’re immediately aware of your vulnerability—you’re a fragile, tiny animal that couldn’t fight back if it had to, whose only confidant is a teddy bear.

On a sunny spring day in San Francisco, I met a few members of the Krillbrite Studio, the game’s creators, at a coffeehouse to try it out. My takeaway is this: while every horrific game makes your skin crawl with foreboding atmosphere and horror movie tricks (cue sul ponticello strings), this time you’re on edge more because you’re responsible for the welfare of a small child. Crawling around on all fours seems alien. Standing is doable but clumsy. The furniture is taller than you. Climbing the dresser is an inelegant task.

It’s psychological. Because you know that at any moment something nasty is going to leap forth from the shadows and freak you the hell out, it’s pretty unsettling to see these little hands and legs bobbing out. I’ll say that the tenor held me for long enough for my imagination to run around. It tapped into some long-repressed memories of being a superstitious child, when I’d place my shoes in exactly the right position under my bed because I’d otherwise suffer nightmares.

After I was done with the demo, I came back to the table and asked the guys why they were compelled to work with childhood fears. They told me it was only natural. They hail from European state of Norway, which they described as a very dark, dank place with a lot of sinister forests and long shadows cast on the chilly Norwegian Sea. “It’s much nicer here,” they said of the weather, “but it can be scary here as well, in a different way.”

“I was incredibly scared of the dark. I had to sleep with the lights on until I was up in years.”

I knew what they meant, as one of the more frightful parts of the demo was glancing up from the screen to be startled by a homeless man collecting bottles right outside the cafe window. Besides that, the demo was genuinely spooky, I told them, even though I had played it in less than ideal circumstances. Patrons were having macchiatos, eating lunch, banging dishes and silverware, but my noise-canceling headphones took care of most of it.

Immersion is important to horror, they told me. And they told me that while they were influenced by Amnesia: The Dark Descent, they were mostly inspired by their own bad dreams and phobias as kids. Ole Andreas Jordet, a self-described code monkey, spoke up. “I was incredibly scared of the dark. I had to sleep with the lights on until I was up in years.” He clarified, “but, not so much anymore.” Anders Ugland, the gameplay designer, confessed his own childhood fears: “Closets, you don’t know what’s behind them!” And, Adrian Tingstad Husby, who does a little bit of everything, was terrified by the household attic. “I didn’t want to go up there,” he said. 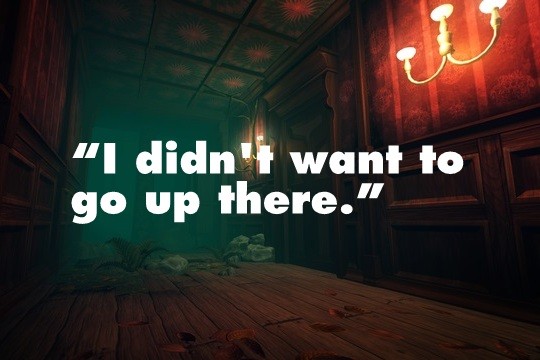 Just what causes a young Norwegian’s mind to run afoul with thoughts of ghouls and things that go bump in the night? It turns out Norway is infamous for demented fairy tales and grotesque children’s stories that are absorbed at a very young age. “Some of them are horrible,” claimed Andreas. It seems these stories mostly involve mythical creatures that live in the forest and drag children by their heels underground, a vibe I definitely took away from the game.

“No, actually, the troll asks him how he eats so much, and the boy tells him he cut a hole in his stomach, so the troll cuts open his belly.”

“One tale is about a child who has been caught by a troll and is trying to escape,” they told me, talking over each other, filling in the gaps in each other’s sentences. “So he challenges the troll to a porridge-eating duel in order to earn his freedom,” one said. “But the boy fakes it. The food falls into a sack,” another said, “and the troll eats too much and bursts open and dies.”

His colleague corrected him: “No, actually, the troll asks him how he eats so much, and the boy tells him he cut a hole in his stomach, so the troll cuts open his belly.” Another cut in, “That’s a children’s story we get told from five or six years.”

In other words, “you stay away from trolls in Norway,” Andreas said. That is, unless you’re playing Among the Sleep. By the end of my time with the game, my young avatar had passed through a portal under the stairs and had come to a threshold, hugging his teddy bear. He was at a domicile that very much reminded me of a place a troll would live. I was relieved that the demo ended before I could go in.