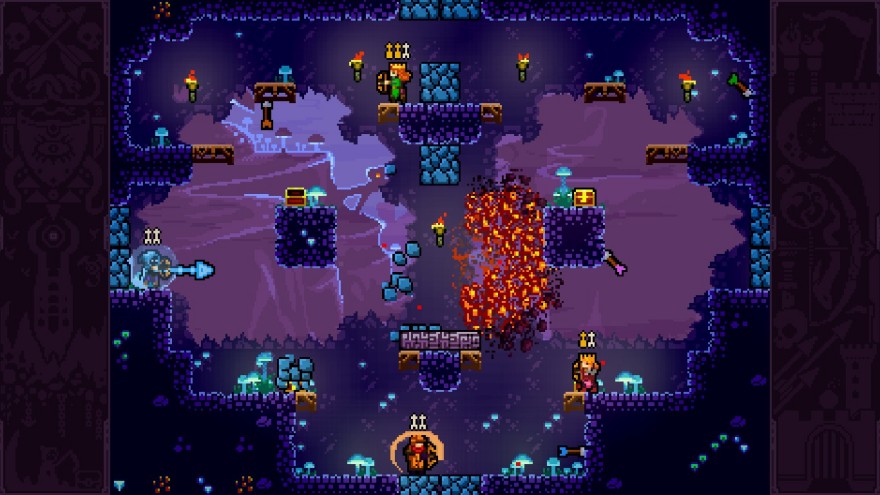 “Well,” said Flynn, one of the three friends I was trying to shoot with an arrow, “we just made this stupid.”

The four archers’ heads were embiggened. Flows of lava narrowed in the corridors of the battlefield. We all started with laser arrows. It was also possible to turn on a variable which made the screen constantly move up or down, or begin the match with arrows that leave a lethal bramble, or enable the ability to turn into a vengeful ghost after you die.

We didn’t choose this configuration, though. It chose us. Well, the outcome of hitting “random” chose us. TowerFall Ascension is designed to be stupid.

Last year, TowerFall was one of the many strong entries to the “new arcade” envelope of fighting games. Along with Nidhogg and Samurai Gunn and, before that, Divekick, they were part of a movement that democratized the fighting game from the Capcom elite, making them beautiful and cleanly narrative. But none injected as much sinister silliness as TowerFall. On top of the inherent calamity of firing a stream of curving arrows into the air, TowerFall dropped chests of powerups, like explosive arrowheads and angel wings. It nudged the experience closer to Smash Bros. brand of bantam combat, which favours a third of luck instead of showdown skill. It’s that difference that’s been refined in the game’s improved re-release Ascension; there is an even greater variety of things to fuck with you.

I had gotten my fill of the Ouya original, so I had certain hopes for what I would be doing in this expansion. There’s not much mechanically different—the music hums the same, and the Quest mode isn’t a 2D adventure as much as waves of survival, though it does have some semblance of boss fights. And screaming “THAT’S NOT ME” to your co-op when there’s a doppelganger amiss is a moment like no other.

Ascension is, instead, more of a gatecrasher for the big wide world; it’s a welcoming party, not revolutionizing the experience as much as throwing in the kitchen sink. But in so doing the game distances itself even further from its contemporaries.

If that feels inexact, so, too, can the game. It’s not precise; it’s explosive. You can nail someone with an eagle-eye shot from across the stage, dupe them with misdirection, hunt the hunters before the invisibility cloak fades. You can also, often, be fortuned, landing a fatal stomp to the head by accident, or alternatively forgetting that “exploding corpses” was activated. There are the little nuances to gleam over time—you can duck to vanish into darkness, and certain walls react differently to arrows—but being on the inside track isn’t the only or fastest way to the throne.

While many new arcade games are built for spectatorship, they can be a little unwelcoming, full of secrets favouring someone who has survived a few rounds. That applies to most videogames, after all, but Smash Bros. found a middle ground, with enough combos and generally good ideas to feel rewarding, but none that can consistently overcome a monkey wrench. TowerFall Ascension, then, is the new arcade’s Smash Bros.: an answer to a new genre that may be more alienating than it realizes, despite its inclusive agenda.