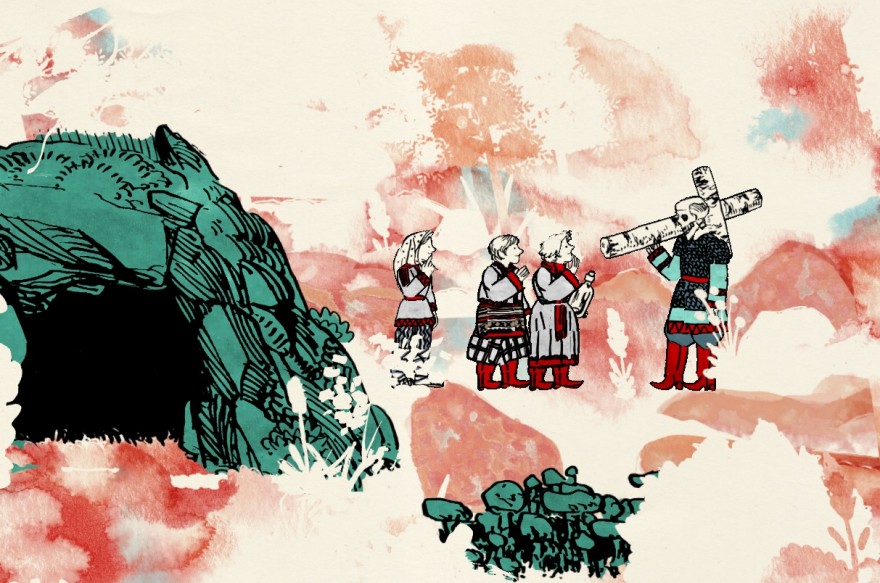 Proteus creator Ed Key and artist Nicolai Troshinsky of Twisted Tree Games have only talked abstractly about their upcoming experimental narrative game Forest of Sleep before. But now, a few months after its initial announcement, the pair have cut into the specifics of what they mean when citing “emergent associations” and “cinematic language.” Speaking to Gamasutra, Key revealed the process behind his effort to use procedural generation to create stories that had both drama and pacing, using only hand-made art pieces and wordless animated scenes.

Crucial to this aim is the choice of influence found in late-20th century Eastern European illustration and animation and its “absurd fairytale logic.” It’s this that Key says has informed Forest of Sleep‘s visual language while pointing specifically to the artistry in Russian animator Yuri Norstein’s short Fox and Rabbit. In particular, Key draws attention to the “sense of framing and cutting between images and the position of characters.” Without words to say more, the viewer—or in this case, the player—naturally pays closer to attention to these kinds of details in a scene, meaning it’s their imagination that weaves the narrative threads together.

But it’s not enough to rely on players to tie together randomized plot points and visual structures. Key talks of striking a careful balance. As such, Forest of Sleep won’t only provide a series of folkloric tableaus but also build in a sense of action and response. This means that certain characters and objects that are generated will be marked for re-appearance later in the tale. This detail might seem trifle but it turns out that our human brains can’t resist creating inferences from this kind of material. In any case, it’s in these object-based callbacks that the stories of Forest of Sleep supposedly find rhythm.

“Even if something happens and it’s gone forever, if you mention it later on you reinforce that the game knows that it happened to the player,” Key told Gamasutra. “Once [the engine] has linked two entities together in its database, those should continue to be associated in some way, at least more than once. If you haven’t seen them for a long time, it should visually or musically recall them to reinforce that association.”

a scientific understanding of narrative.

The trick, then, is to have the player believe that the story they’re piecing together has been intended by an author, rather than produced with a piece of code. In order to achieve this, Key has had to deconstruct formulaic narratives and discover each of the common components so that he can feed them to his code to inform its replication. The result of this pursuit has led to what can only be described as a scientific understanding of narrative. Key reeled it out:

“The individual parts are kind of crafted templates that can take entities that have certain prerequisites. Such as having an item you don’t own, or someone you haven’t met before. The idea is that [the engine] has a lot of those to choose from, and the story system is working along this timeline, and as it moves towards an apex or twist, that becomes more flexible as the player might do something to stretch it out.”

The challenge for Key here is masking his method as is often the case with procedurally generated works. The nature of these projects means that repetition and accidents are easy to come by and immediately expose the skeleton carrying the whole thing. The team behind No Man’s Sky has overcome this by having hundreds of tiny drones that record videos of its many planets for the team to check over. It’s a compromise between total randomness and an effort to have order. It seems that Ed Key is going for something similar with Forest of Sleep except the subject isn’t a universe but short stories and implied plot structure. As Key concludes: “It’s a narrative playspace, rather than a linear narrative that the player goes through.”

You can find out more about Forest of Sleep on its website.