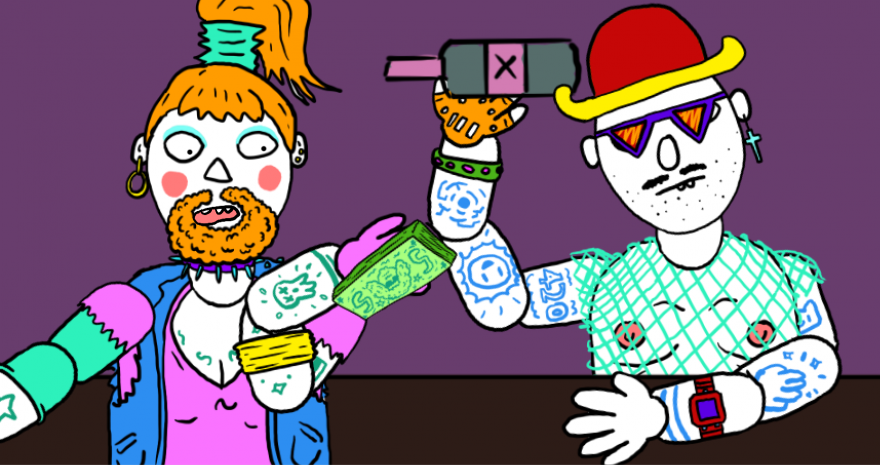 Team Lazerbeam, the folks behind Snow Cones and Wrestling With Emotions, started their latest game Dress To Express Dancing Success—a dancing and dating simulator—with the intention of creating their least sensible and least complicated game. And they kind of failed.

“Before that we’d been on a pretty bad run of jamming, being really excited, getting super carried away, and having only random bits of our game done by the time the jam was over,” Team Lazerbeam’s Ben Rausch told me. “This disturbing trend started with Snow Cones.” Snow Cones took months rather than the allotted days. Wrestling With Emotions took longer. Dress To Express Dancing Success was supposed to be tiny. The game took Team Lazerbeam one month instead of three days, which ended up being a big improvement over its previous games.

Try to stay cool. You can do this! Believe in yourself!

Dress To Express Dancing Success is the story of a somewhat awkward and self-conscious fashion enthusiast looking to cut loose and meet some hotties at the club. They’re a little apprehensive about dancing—not exactly their forte, but they look good. Real good. A few cuties are hanging at the bar, and they want to dance. And when the cool kids want to dance, there will be dancing. Try to stay cool, try to stay cool. You can do this! Believe in yourself! Dance! With Dress To Express Dancing Success, Team Lazerbeam implemented its revolutionary Dance Orbit Rotate Kinetics—for short, D.O.R.K.—mechanics for endless possibilities of dance moves.

Despite creating a fun, silly game, Team Lazerbeam felt almost uncomfortable putting Dress To Express Dancing Success out. “We’re all weirdly proud of this game, although we also felt kinda ashamed putting it out as well,” Rausch said. “It was just like, ‘here’s this weird thing about how we’ve felt uncomfortable dancing in front of people.’” There’s real heart underneath the wacky clothes and wild dance moves: being comfortable in expressing parts of yourself that you might be ashamed of, that believing in yourself—and accepting yourself—is the coolest thing you can do.

“Honestly, the response has been pretty great given what an unusual offering this is,” Rausch added. “It’s the best feeling to being able to watch our games [on YouTube] being played by these people that really get us.”

Play Dress To Express Dancing Success on itch.io. Other games from Team Lazerbeam include Snow Cones, Wrestling With Emotions, and Pizza Quest.