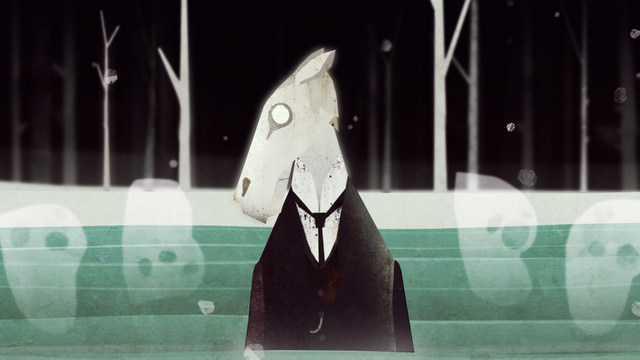 The space and the imagery of the first-person game Year Walk reminded me of my own trips to Northern Europe, especially a winter trek to Trondheim, Norway, when I walked through a forest outside the city to the home of the black metal musician, Snorre Ruch.

A frozen pond, a wagon wheel, a cart, and a goat man in a cloak.

Ruch has a legendary status in the world of black metal. He was one of the people present the night Mayhem founder Euronymous was murdered in 1991 and was then convicted to serve eight years in prison as an accomplice to that murder. He is a key to the founding of black metal’s mythology, and our silent 15-minute trip to his home at the far end of the woods made me feel like I’d somehow snuck into that storyline.

Year Walk, developed by Simogo, also offers a  journey through the snowy woods at night. Here, though, you’re on a vision quest in 19th Century Sweden, trying to read the future (and the past). If you make it through the first few steps and clues, you’ll also see it’s a bit of a love story as well.

That’s if you decide to follow the story. I did for a bit, then I wandered away.  I found myself more interested in the landscape, and forgetting about what was happening outside of it, then engaging in the clues provided. I never felt the need to complete it: It never stops snowing in Year Walk, and the horizon line (ghostly trees, pitch black sky, snowflakes) are striking. It’s not unpleasant being lost there.

But there are a series of eerie puzzles that surface–a ghostly woman who acts as an obtuse guide, a couple of owls that should be tapped in a certain order (and were reminiscent of American spiritualists, the Fox Sisters), a rickety wooden dia, a Windmill (where you see your love), and a bloody wooden doll in an outhouse. Solving the puzzles, many of which involve spinning, takes you further into the woods, though you can also go deeper by ignoring them and walking back and forth–basically, spinning yourself.

The movements on the iPad are both practical and metaphorical. You circle to the same spots, with things shifted slightly– for instance, there are more satanic scratchings in the trunks of the trees than you remembered or you get the sense that that pile of rocks is smaller. There are also tracks in the snow (yours? someone else’s?), a frozen pond, a wagon wheel, a cart, a crow, a graveyard (featuring horse, bird, host, etc., symbols), a church with that same goat symbol, and a goat man in a cloak. These all seemingly move and morph slightly the more times you pass them. And of course, the sound design is great and spacious; it’s patient, painterly, mostly empty.

…when black metal musicians still wore corpse paint, posed for darkly lit photos in caves, and didn’t use their given names on Facebook pages…

At first I was tempted to listen to black metal along with it, but I enjoyed its relative silence, the sound of feet crunching snow, and I didn’t want to turn it into a stoic Immortal video. It also reminded me of the time when Scandinavia’s most iconic musical export had more mystery surrounding it, when black metal musicians still wore corpse paint, posed for darkly lit photos in caves, and didn’t show up in art galleries or use their given names on Facebook pages. I wanted to preserve that feeling in the game because it’s not something we can return to outside of it.

Really, what made Year Walk most interesting to me was just how far removed it was from my everyday. In that spirit, maybe the most unnerving, and most touching details, were the bloody tracks in the snow. This is something you’re obviously supposed to investigate, to get to the bottom of, to crack. Or you can simply stand still in the snow and watch the red seeping into all that white around it.