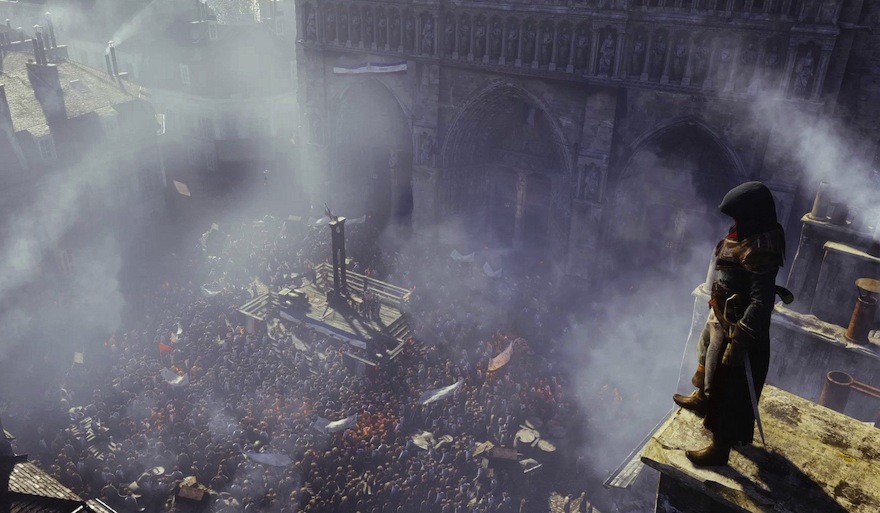 The more fiercely people press together the more certain they feel that they do not fear each other.” – Elias Canetti, Crowds and Power

In 1964, British historian George Rudé published The Crowd in History, a ground-breaking work of scholarship that helped shape the way future generations of college students would view the course of history. In juxtaposition to Thomas Caryle’s 19th century “great man theory,” which posited that the past is best told through the lives and works of those leading the pack, Rudé and others advocated, in the true spirit of the 60s, that history was best told from below.

And the French Revolution in all of its tumult was, to Rudé, chronically misunderstood. Unlike the popular perception that crowds were dangerous and unruly, he argued that “those who took to the streets were ordinary, sober citizens, not half-crazed animals, not criminals.” In other words, the crowd was human.

James Therien echoes Rudé’s position. “Every crowd is an individual,” the pipeline technical director at Ubisoft says as he pushes through his own unruly mob in the streets of Paris. He is walking through in the shoes of Arno Dorian, another talented and deadly killer in Assassin’s Creed Unity (not 5, as he quickly tells me). Set on the eve of the French Revolution, ACU is the latest in the historical fiction series that has taken players from Jerusalem to Rome to Louisiana. And in every title in the franchise there has been a secret weapon that pulls each universe into coherence: crowds.

Since the launch of the first Assassin’s Creed in 2007, Therien has thought about nothing but how crowds work, how they move, and ultimately, how to simulate them. Masses of people are one of the most important figures in the AC series as the assassins require them to hide their position and ambush potential targets. Creating realistic crowds has been paramount. But while there has been much study on the sociological and epidemiological realities of crowd movement, Therien says that there hasn’t been much to help them create them realistically in digital space. “We’re at the bleeding edge,” Therien says.

Part of the problem is that crowd research tends to focus on the dangers of large masses of people. The ninety-five people that died in a crush at a Sheffield soccer match. The spate of trampling on Black Friday over the past few years. That we obsess over the peril of the crowds again reflects that impulse Rudé attempted to liberate.

In The New Yorker, John Seabrook notes the disconnect between the language of “panics” and the reality of how crowds are actually dangerous:

The crowd is portrayed as a single, unified entity, which acts according to “mob psychology”—a set of primitive instincts (fear, followed by flight) that favor self-preservation over the welfare of others, and cause “stampedes” and “tramplings.”

In reality, it’s not a witless frenzy that causes “crowd collapse” or “compressional asphysyxia” (a euphemism par excellence for “crushed the fuck to death”). It’s often something as innocuous as a blocked exit at the base of an elevator that causes disaster. Seabrook notes: “Almost no one speaks for the crowd, and the crowd usually takes the blame.”

Consider Therien to be that voice. He and his team are unwittingly humanizing the crowds in ACU by giving them desires and motivations. Arno can both observe the crowd from the tops of French cathedrals but also drill down to microscopic interactions of a man purchasing a baguette for his family. (It’s worth noting how few women there are in the crowd.) Those interactions are both scripted and emergent, representing dozens of potential behaviors that an NPC can make in their walk through the city. “Crowd stations” emerge, clusters of characters gathered around a single event whether it’s townspeople beating a noble to death, a gawking crowd outside the site of murder, or a thief taking a young woman’s purse. Each one of these interactions often presents an opportunity for Arno to engage in a side-quest. “It’s not The Sims,” Therien says, but individuals now have routines that take them throughout their quotidian existence as they shine their shoes and build barricades.

For the more than 70 animators, the challenge then becomes creating enough diversity to populate an entire city. Each character can have a half-dozen moods that effect their facial expressions and their gaits. The angry mob feels angry. Facades grimaced and twisted with anger, fists pumping in the air, and the occasional shirtless maniac all add an air of authenticity to the sense of fraught and manic timbre before a revolution. Well, that, or Coachella. Nonetheless capturing that spectacle requires the ability to recreate a sense of scale.